Back home, I'm making dinner for a group.  Laura plays tennis with her sister and a few friends on Wednesday and we all (tennis players and spouses) alternate bringing dinner to share afterwards. Now it's my turn and I think of a dish that can feed 7 and be transported to the sports club.

Aha, Chicken Scarpariello from Rao's Cookbook (Over 100 Years of Italian Home Cooking), a great collection of recipes from the famous East Harlem restaurant, Rao's.  Chicken Scarpariello is a one-pot dish with a fabulous mixture of tastes (tweaked a bit from the Rao's version), perfect for my needs.  To accompany it, I debate whether to prepare a garden salad or a Greek salad and decide to go with the Greek, based on a recipe from Ina Garten.

For the salad, I start with slices of seeded English cucumber; diced red, yellow, and orange bell peppers; halved cherry tomatoes; and half rounds of red onion.  I also prepare a small plate of halved, pitted, calmata olives and diced feta cheese.  For the dressing, I make a vinaigrette of garlic, oregano, Dijon mustard, red wine vinegar, and salt and pepper, slowly whisked with 1/2 cup of olive oil to make an emulsion.  These all go in the refrigerator for later assembly, about an hour before dinner, allowing the tastes to blend before serving. 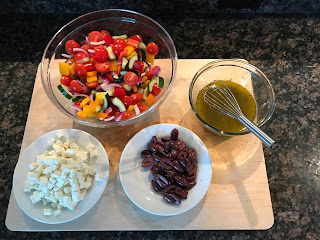 One of the great things about Chicken Scarpariello is that I can prepare almost everything in advance and then assemble it all at the end, just in time to transport.  The recipe calls for most ingredients to be sautéed in hot vegetable oil and I first slice two pounds of hot Italian sausage, red/green/yellow bell peppers, and an onion.  I then also stage twelve chicken thighs, minced garlic, and assorted vinegared hot and sweet peppers.  Also, to add later, 1/2 cup each of chicken broth, white wine, and vinegar from the sweet peppers. 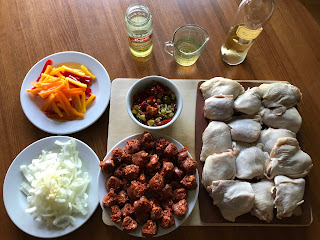 All the components, ready to go 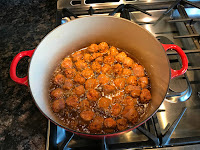 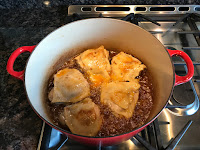 After cooking, the sausage is set aside to drain, while the chicken continues to cook, mixed with the bell peppers, onion, and garlic, until the vegetables start to get soft. 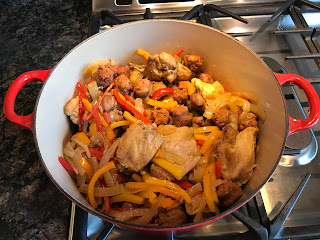 I then remove the chicken and vegetables from the pot and discard the remaining oil.  The dish is now ready for final assembly, starting about 1/2 hour before I need to leave the house with everything.

The final steps involve returning the sausage, chicken, and bell pepper to the pot, adding the wine and chicken broth, and bringing it all to a boil.  Then the vinegared peppers, vinegar pepper juice, and a little dried oregano, salt and pepper go into the pot.  I simmer this all for 10-15 minutes to combine the flavors and reduce the sauce.  It's good to go. 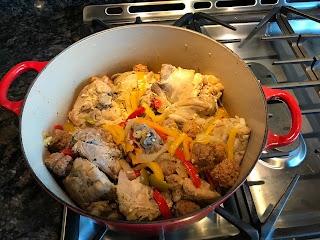 And, don't forget the salad.  I mix together the vegetables, olives, feta cheese, and vinaigrette.  Stir, cover, slice a baguette, and prepare to travel. 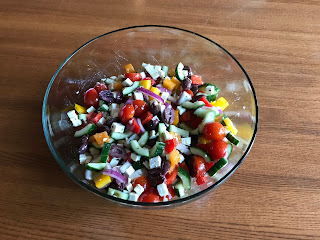 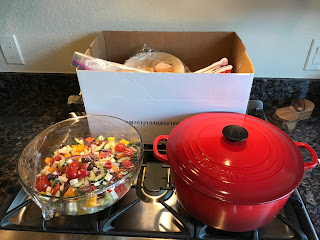 The combination is well-received and there are even leftovers for us to enjoy in the coming days.
Posted by Sojourner at 10:23 AM