We once again interrupt our regularly-scheduled programming for another timely Singapore experience: Chinese New Year.

I return from Bangkok (more on that coming soon) with a stopover in Singapore just as the Chinese New Year celebration begins.  I meet ChongBee for dinner and afterwards we stroll through Chinatown to see what is going on.  A lot!  The population of Singapore is about three-quarters ethnic Chinese and the Chinese New Year festival is a big event here.

The coming year is the year of the Rooster and we find a large one in the middle of New Bridge Road on the edge of Chinatown, between Chinatown and the riverfront district. 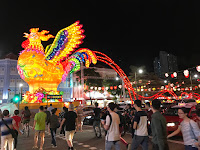 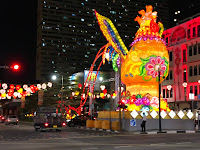 Year of the Rooster coming up

The year of the Rooster starts January 28 and runs until February 15, 2018, with the Rooster representing fidelity and punctuality.  I understand that this arises from the period before alarm clocks where the crowing of the rooster was important to awaken people and get them to work on time. There are lots of people standing in the street and in the crosswalks taking pictures of the Rooster, just as I am.

We head away from the main boulevard and the bright Rooster and into the narrow streets of Chinatown where all the action is, streets transformed into markets selling every conceivable item.  The streets are closed to cars and packed with stalls and people, lots of fun! 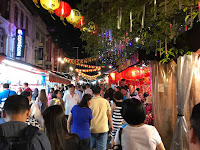 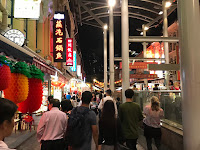 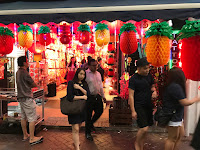 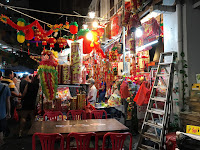 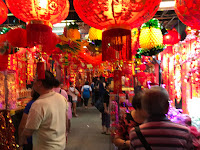 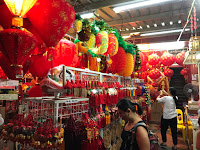 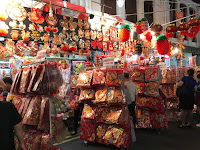 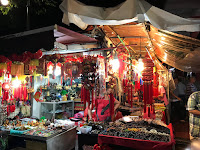 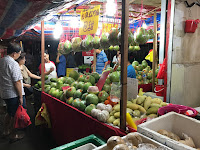 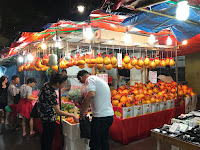 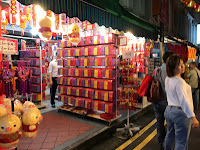 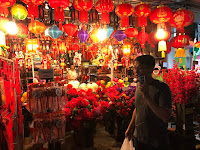 Full of stalls selling everything and anything

I understand that the best time to shop is around midnight Friday, the last day the stalls will be open,  when they have to sell all the merchandise or pack it up unsold and close for good (until the next celebration).

After wandering through the streets and markets, we emerge in the central square of Chinatown, next to the Buddhist temple, where a free concert is pulling in a large crowd. 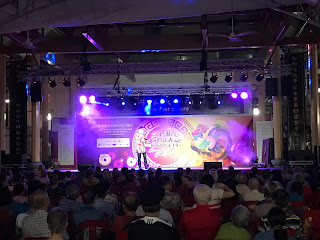 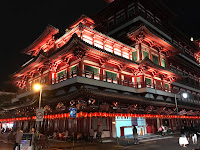 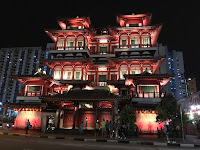 Next to the Buddhist temple

Walking around the corner, we enter the food-court street, a block of restaurants and stalls with wonderful-smelling creations.  We had dinner at a food court just outside Chinatown and don't stop to eat, just pass through and enjoy and appreciate the smells and sights. 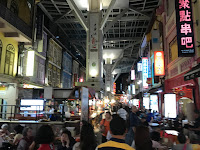 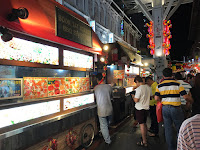 The streets around Chinatown are all decorated with lanterns and lights to join in the celebration. 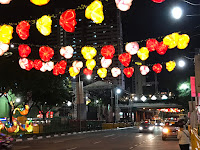 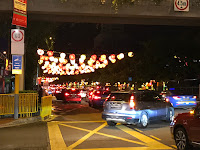 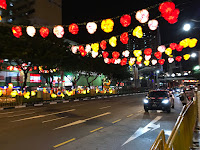 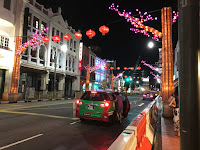 Decorations in the surrounding streets

And, for the large crowd, the usual appropriate warnings. 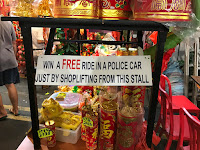 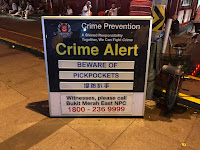 Signs of the times

After an hour or two of wandering the streets of Chinatown, it's time to head back and catch some sleep before the early flight back to the US. 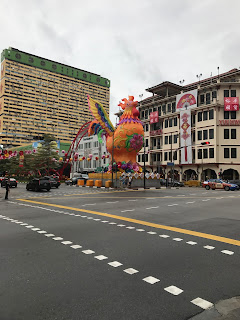 Street Rooster in daylight
(not as spectacular without the lights, but still impressive)

We enjoyed our brief stop for the Chinese New Year celebration and know that everyone here will have a great time over the coming holiday!

Posted by Sojourner at 8:51 AM