I've heard of Fuxing Park and even walked by previously, but, now, it's time to visit.  Fuxing Park is right in the middle of the colonial-era French Concession and around the corner from the former residence of Dr. Sun Yat-sen, first president and founding father of the Republic of China.  Sun Yat-sen was instrumental in the overthrow of the Qing Dynasty (1644-1912) and was appointed Provisional President in 1912.  Fuxing Park was built around the same time, in 1909, with a lake, fountains, gardens, and covered pavilions covering about 10 hectares (0.4 square miles). 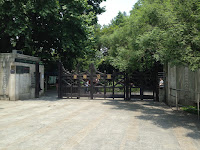 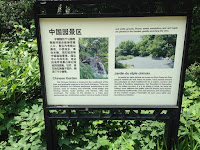 I enter the park through the main gate at the intersection of the Fuxing Road and Chongqing Road (South), I immediately start to walk down the beautiful paths meandering through the gardens. 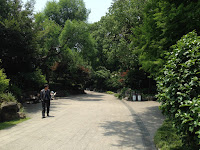 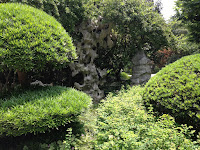 Wandering further into the park yields tranquil scenes for resting, contemplation, meeting with friends, or just hanging out. 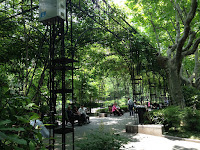 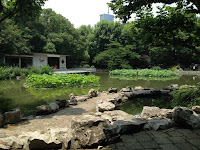 And, even further into the park, I arrive at the fountains. 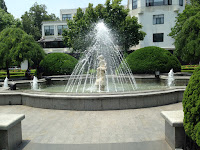 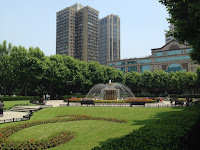 And, of course, in Shanghai no garden is complete without wedding party photography in process. 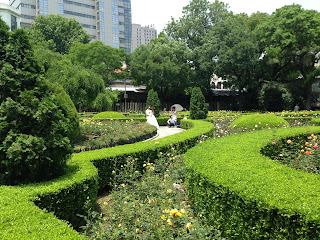 Wedding party photographs in the park

As I get close to the upper exit of the park, I find people ballroom dancing, across from an imposing statue of Karl Marx and Frederick Engels, created to commemorate the 90th anniversary of the death of Engels on August 5, 1985. 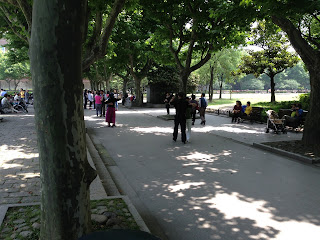 Ballroom dancing in the park 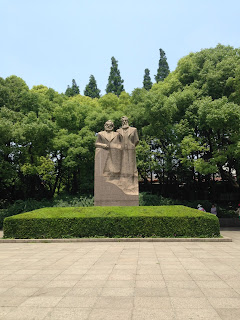 Statue of Marx and Engels
Leaving the park, I head over to and up Suzhou Creek to the Mengquing Theme Park on Environmental Protection of Suzhou Creek (quite a mouthful!).  Suzhou Creek was cleaned up and rehabilitated between 1998 and 2008 and the park was established to celebrate the cleansing of the river with a theater, displays, and an exhibition hall, all emphasizing environmental water science education.
I wander through the park for its gardens, sculpture, and activities. 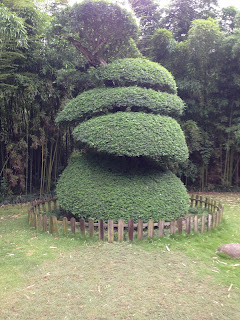 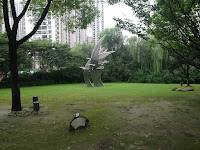 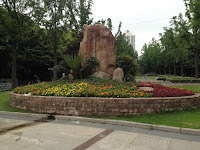 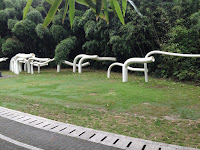 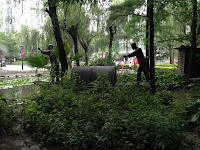 Sculpture and gardens in the park
And, of course, a stop to listen and appreciate a singing group practicing in the pavilion. 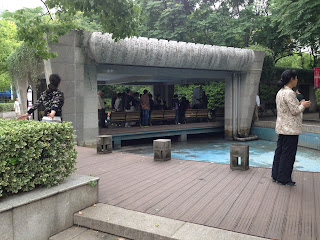 Group singing
As we are getting close to the Chinese National Dragon Boat holiday, the park is being set up for Dragon Boat races on the river in a few days.  The Dragon Boat holiday is a national Chinese holiday occurring on the 5th day of the 5th month of the Chinese calendar, thus alternately called the double fifth festival.  This festival is said to have originated from locals paddling out on boats to scare the fish away and retrieve the body of Qu Yuan, a patriotic poet who drowned himself in 278 B.C.  The holiday has been held annually for more than 2,000 years and the dragon boat races are a symbol of the attempts to rescue and recover the body.  Dragon boats are so named because the front and back are both in the shape of a traditional Chinese dragon.

On the way to the park exit, I pass a children's play area with playground equipment and a large collection miniature vehicles. 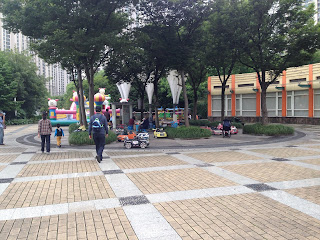 Play area
Now, it's back along the Suzhou Creek to the hotel and on with my day.
Posted by Sojourner at 5:30 AM