Wandering Down Qianmen Street in Beijing

Qianmen Street is a famous pedestrian street in Beijing, between Tiatan Park and Tiananmen Square, just south of the square.  The street has a history of over 570 years, through the Ming and Qing Dynasties, currently with modern shops and apartments in the style of the Qing Dynasty (1644-1911).

Walking up from Tiantan Park, I first cross over busy Zhushikou East Street on an overpass decorated with physics equations, starting with E=MC². 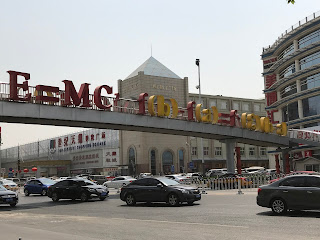 Physics on the footbridge

Passing over the physics, I reach the southern end of Qianmen Street and see a long, beautiful promenade, without many people (that will change as I approach Tiananmen Square). 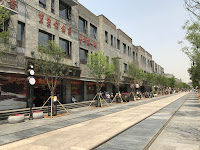 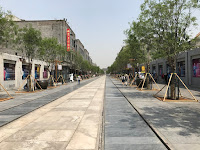 The street was completely renovated and reopened just before the 2008 Beijing Olympics, in anticipation  of the large crowds of tourists.  Including, modern fast food. 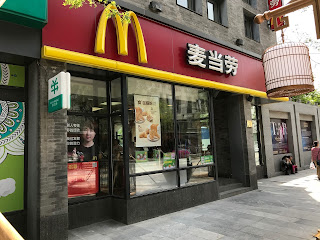 As I walk down the street, I find great decorative statues outside the stores. 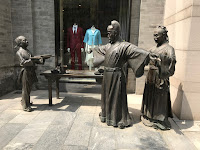 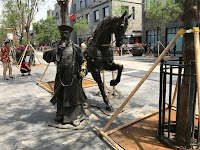 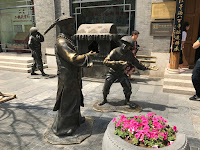 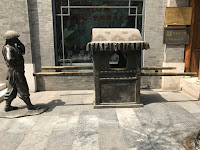 Statues on the street

And, gaze up to admire the Qing Dynasty architecture, both on Qianmen Street and on the sidestreets leading off from it. 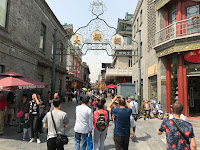 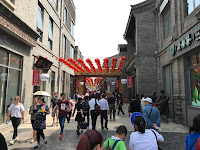 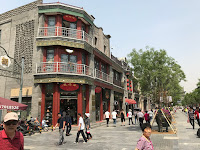 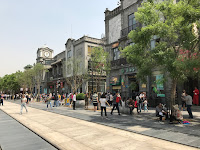 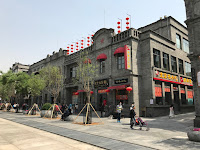 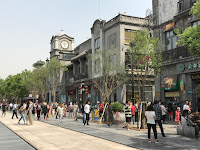 And, emerging from Qianmen street at Tiananmen Square, I look back at the grand entrance to the street and the inviting restaurants in the first few buildings. 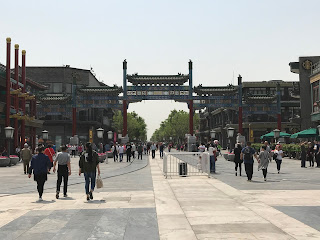 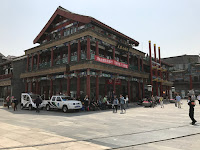 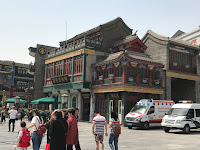 Although Qianmen Street is only 840 meters (1/2 mile) long, it packs in a lot of history, sightseeing, shopping, and dining.  Just below Tiananmen Square, it is not only a great stroll on its own, but provides a pathway to and from Tiatan Park and the Temple of Heaven.
Posted by Sojourner at 7:30 AM