After arriving in Shanghai around 7pm and getting to the hotel around 8:30pm, it's time for a glass of wine and some sleep.  But, something odd is going on at the hotel.  Every time I call the elevator, the door opens and the elevator is full of young Spanish women in bathrobes.  Eventually, I remember that the person who checked me in mentioned that there was a big convention at the hotel.  It must be spa night for the group!

In the morning, I head out for a walk through Shanghai and see that the people in the convention group are all lined up outside, waiting for a tour.  And, around the corner are buses, waiting for them. 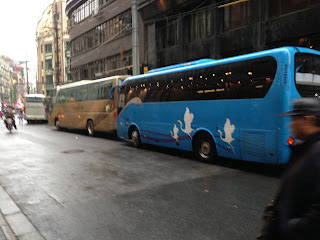 Buses lined up by the hotel in the morning

Across from the buses, school is starting and, like everywhere else, parents are dropping off their children. 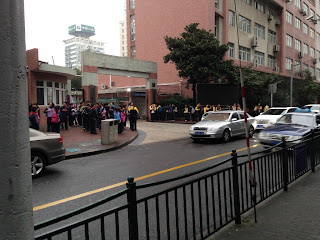 Dropping off at school in the morning

Around the corner, I pass the entrance to People's Park, but don't go in today.  I'll save that for another time.  It's a great park, but we're on a walk through the city today. 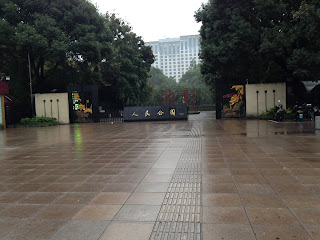 At the end of People's Park, there is a good example of Old Shanghai and new Shanghai, the old clock tower in the former Shanghai Art Museum (moved to the Shanghai Expo 2010 China Pavilion in 2012) and the JW Marriott tower. 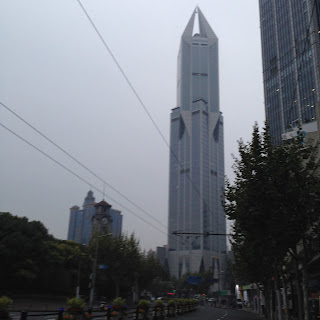 Nanjing Road, alongside People's Park, is, like many main streets, decorated with flowers in planters.  This really helps brighten up the city. 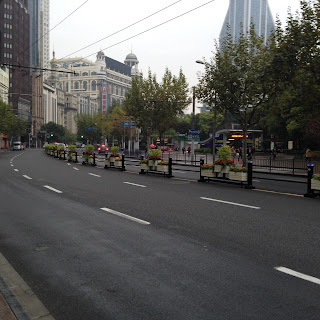 A little further down Nanjing Road, I come across a sign showing some of the restaurants in the building behind.  Many of the buildings are full of restaurants, one can wander in and choose from a wide variety of styles and cuisines.  The malls all have floors of restaurants, ranging from fast food to high cuisine.  Something for everybody. 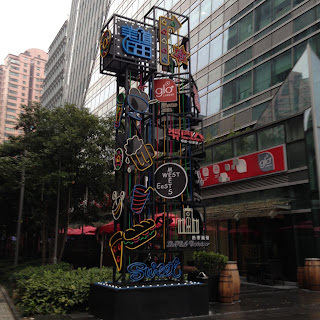 As I leaving Nanjing Road and head south, I start to pass construction.  Shanghai is still building, tearing down the older structures and putting up newer, higher ones.  The site on the right is the new Four Seasons Hotel. 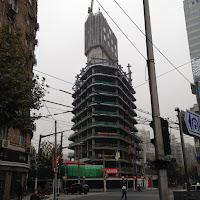 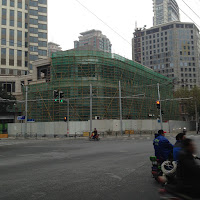 And, still much is done by hand. 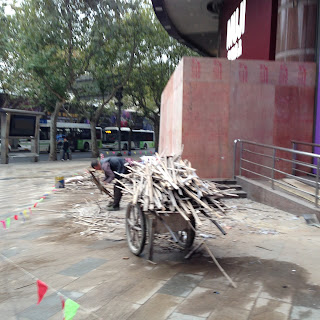 Sorting and removing the rubble

While, across the street, someone practices his flute in the corner of a building, where he won't bother the neighbors. 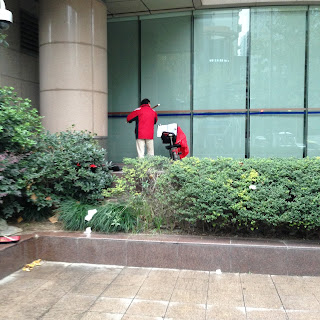 Practicing in the morning

I'll keep walking and share some more in the next posting.

Posted by Sojourner at 8:47 AM