Heading Back to China, Trying to Stay Healthy

It’s hard to avoid sick people on long flights.  The flight to Shanghai is about 13 hours (or, as I like to think about it, 6 movies) and there are a lot of cranky and/or sick people on the plane in both directions.

Two trips ago, the person across the aisle from me had come down with something that he just had to share with all of us (yes, 23H, you know who you are).  He was coughing and sneezing and I'm sure most of us got it.  I sure did and it took several months to fully get that bug out of my system.

The trip before that, a child in the row ahead of me cried for about 12 hours, giving us all one free hour for a quick nap at the end.  That’s the kind of flight from which you arrive to the question at immigration, “Business or pleasure?” and you can’t remember, thus subjecting yourself to a little extra scrutiny.

In China, I ride the Metro to all my meetings.  The Shanghai Metro system is new, modern, efficient, easy-to-use, inexpensive, and has stations within a block or two of just about everywhere I want to go.  A 1-1/2 hour ride in from the airport in Shanghai (and also, Shenzhen) costs 7RMB or about $1.10 USD.  A ½ hour ride in the city from my hotel to a meeting typically costs 3RMB or 47 cents.  That’s a good deal!  However, there are a lot of people on the Metro and some of them are sick. I'm sure I’ve picked up a bug or two there.

One trip last year, I was in Shanghai long enough for a cold to start to appear.  Then, I was the sick person on the plane as, after spending the week in Shanghai, I flew down to Taipei on Sunday for a Monday meeting, then back to Shenzhen, China (next to Hong Kong) in the evening.

After my meeting in Taipei, my colleagues were kind enough to give me some cold medicine and a ride to the Taoyuan Airport.  My short flight back to China was uneventful, but as the Eva Air 747 emptied out and I walked into the new Shenzhen terminal (beautiful, but really big) in the middle of the crowd, a Chinese official walked directly up to me, “Please give me your passport and come with me sir,” and escorted me to the Quarantine Bureau clinic.

They had detected that I had a fever as I walked down the corridor in that large crowd.  That is impressive technology!

At the clinic, a nurse took my temperature while another person read through my passport to see where I had been recently.  I kept saying, "I was here, I was in Shanghai last week,” but they wanted to see for themselves.  They then took a sample of my blood, difficult because I was dehydrated and they couldn’t get to a vein in my arm and ended up taking the sample out of a vein on the back of my hand.

Satisfied that it was unlikely that I was a danger to China, they gave me a face mask and a card that would give me priority in any Chinese hospital for the next 2 weeks and sent me on my way. 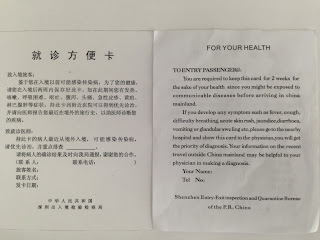 Two days later, I took a van to Hong Kong and they took the temperature of each of us as we crossed the border.  I must have been doing better then as they let me into Hong Kong and I didn't need to tell the story of my China blood sample.  And, luckily, I was much better before getting on the long flight back to the U.S.

Taking a quick look at the Shanghai Real-Time Air Quality Index, I see that it is showing Unhealthy air for the last two days, with a reading today of 168.  Shenzhen is doing better, with a reading of 81 or Moderate.

The scale is based on US EPA standards, which focus on "fine" air particles (less that 2.5mm) that generally come from combustion activities or industrial processes.  These <2.5mm fine air particles pose the greatest risk because their small size allows them to lodge deeply in the lungs.  The World Health Organization recommends a safe level of 25, based on the following scale:

We all have heard of the poor air quality in Beijing, but Shanghai was generally not too bad.  Then in the winter of 2013/2014, all of a sudden the air quality in many other Chinese cities took a turn for the worse.  In November 2013, Shanghai reported an air quality level of 228 and on December 6, it briefly surged to an average of 482, over 500 in the Xuhui District, severely polluted.  Schools were closed; children, elderly, and sick were were told to close their windows and stay indoors; construction was halted and public activities were cancelled.  At the same time, at least 16 other cities in Eastern China were reporting hazardous levels.

Last winter was better and my last few trips this year, the Shanghai air quality was generally Moderate, I guess I'm hitting it at the wrong time this trip and hope the air quality this winter matches last winter, not 2013/2014!

The blog will be in recess for a week as it is not accessible in China, either to post or to read.
Posted by Sojourner at 8:45 AM