Nantou is located in the western corner of Shenzhen, founded in the 4th century AD, with traces of civilization dating back to the Shang Dynasty (1700-1100 BC).  In the Ming Dynasty (1368–1644), Nantou was a busy commercial port, serving as the gatekeeper of the Pearl River and was at one time the center of government for the Pearl River Delta.

Nantou is a walled city that still has thousands of residents in modern apartments within the city's ancient walls.  Much of the city has been preserved as historical landmarks and museums, scattered among the modern and ancient buildings, including naval and civil headquarters, a silver shop, an opium den, and a brothel.  The city of Shenzhen also renamed the town Xin'an Old City and build a museum outside the walls in an attempt to create a historic destination. However,  Nantou remains more a lived-in historical area.than a museum showpiece, with modern life continuing in its narrow alleys. 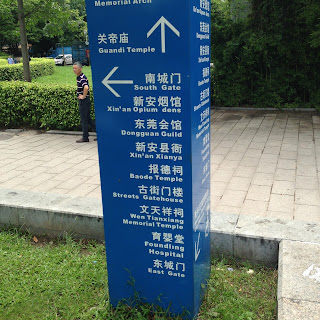 The city is entered through several gates in the Ming Dynasty walls.  I walk down Shennan Boulevard from my hotel 12 km (7.5 miles) away (more sites from the walk in a later blog) and enter through the South Gate at the corner of Shenzhen Boulevard and Nanxin Road. 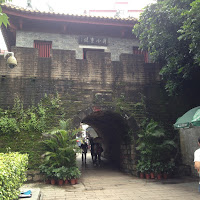 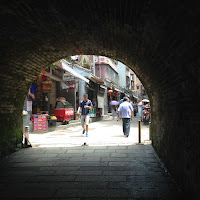 The narrow streets have a lot of character, although they are now mostly filled with shops for the residents of the modern buildings in the ancient city.  When Shenzhen was designated as China's first Special Economic Zone in 1980, spurring its incredible growth from the small town to the over 10 million current residents, the rapid influx of people caused many of the historic buildings to be demolished and replace with modern multi-story residences. 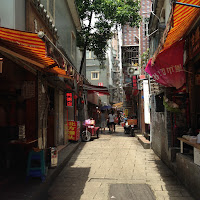 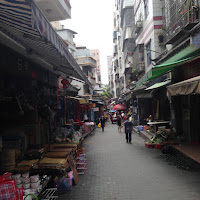 Streets in the walled city

And, outside one ancient shop, the Angry Bird ride for use by modern kids. 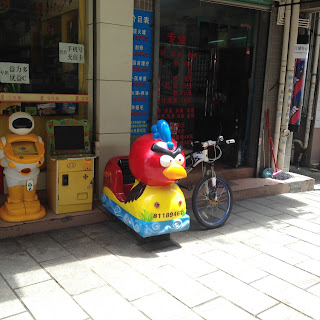 Scattered among the shops are small, restored one- and two-room museums with pictures of the city in prior days. 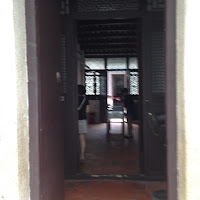 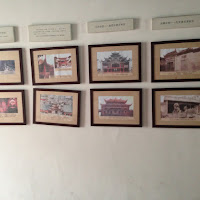 Two-room museum, looking in and inside display wall

Heading back out through the South Gate, I spot the Guan Yu Temple just outside the gates, still in use by the local residents, with incense burning in the shrine in the front courtyard. 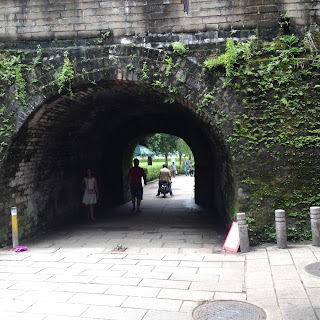 Heading back out through the South Gate 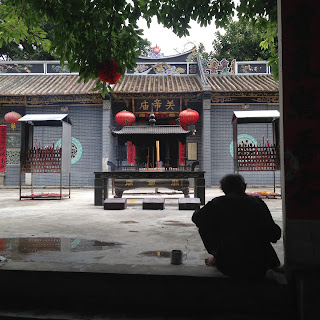 Temple outside the South Gate

And, as I leave the Nantou area, walking down Shennan Boulevard, I pass a police box, with an ATM inside.  What a great idea for safe ATM access! 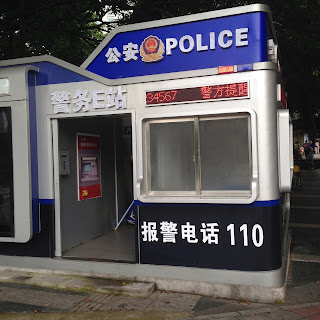 Police box with ATM inside

And, a little further along, in this busy, commercial city, people are taking a break to go fishing in the river, across from the heavy construction. 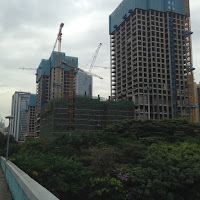 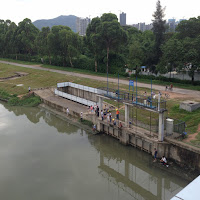 
I continue down Shennan Boulevard, back toward my hotel in the Futian district.  I could take the Metro back (8 stations away on Line 1), but it's a good day for a walk and to explore a little more.
Posted by Sojourner at 9:25 AM