A Trip to Lithuania Right in Alameda

Mamma Pappa Lithuania Restaurant and Tea House in Alameda, California (next to Oakland in the East Bay) calls itself the only Lithuanian restaurant on the West Coast, perhaps even west of Chicago.  My Lithuanian friends ask about it and my sister wants to go there whenever she's in town.  Well, she is, and Marla, and her husband, Al (Al of the Rubinoos and the birthday party at the Kensington Circus Pub) meet us at Mamma Pappa Lithuania for a great meal with family.

Alameda Magazine voted Mamma Pappa Lithuania the Best Comfort Food in 2014.  Lithuanian food focuses on meats, greens, and potatoes, drawing from the traditions of Baltic tribes who originally inhabited the region.  The cuisine shares much with its Northern European neighbors, including Poland, Ukraine, Hungary, Germany, and Georgia.  The food is generally mild with potatoes (boiled, baked, or sauteed) and rye bread at every meal and several meats, most often pork, but often beef, lamb, and chicken.  Soups are popular, as are pancakes filled with either potatoes or meat.

Lithuania currently has about 2.9 million people and is one of the three Baltic states, surrounded by Latvia, Belarus, Poland, and Russia.  It was one of the first Soviet Republics to declare itself independent in 1990 and is now a member of the European Union (EU) and NATO.

But, we're talking about dining today, so we start by reminiscing about dinner at our Lithuanian grandmother's house when we were young.  We would make the 2 hour drive to DeKalb, Illinois every month or so and be fed as if our parent's had been starving us since we were last there.  The meal would usually feature three meat platters, pork, beef, and chicken, and two or three different potato dishes.  With a huge loaf of fresh rye bread.  I would eat until I couldn't hold any more, and, sometimes, even beyond that.

Today, we head over to Mamma Pappa Lithuania restaurant to bring back those memories and to have a great meal.  The restaurant is cozy and rustic, with heavy tables and chairs built from reclaimed wood, murals and pictures of Lithuanian sites on the walls, and owned and staffed with friendly people from the country.  We feel like we're entering an old tavern in Lithuania. 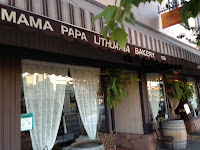 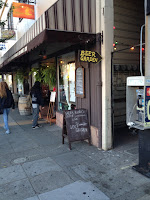 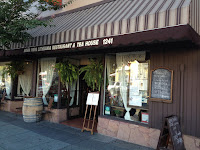 Restaurant, with bakery alongside and beer garden in the back 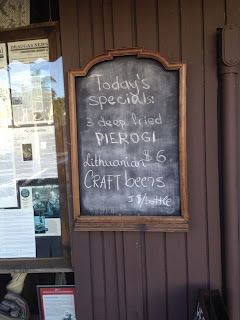 One of today's specials

We arrive at 6 in order to get right in.  Similar to many restaurants on Park Street in Alameda, Mamma Pappa Lithuania only takes reservations for large parties.  Thus, on Saturday night, arrive early or be prepared to wait on the sidewalk for a while.  However, the groups standing outside restaurants later in the evening all seem to be having a good time.

To start our Lithuanian meal, we share a minced pork pastry with garlic, chives and sour cream.  It turns out to be a great, flaky pastry, that pulls together the combination with a fantastic taste in our mouths..  The pastry disappears fast, perhaps we should have had one each! 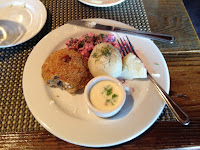 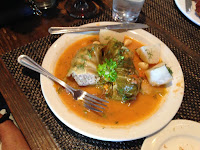 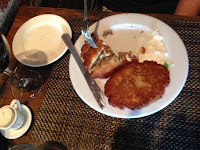 We share a bottle of cabernet sauvignon with the meal, complementing everything well.  Alternatively, we could have had one of the great Lithuanian beers or, as a non-alcoholic option, a natural Baltic amber teas.

Mamma Pappa has expanded recently to open a Lithuanian Bakery alongside the restaurant. with cookies, pies, pastries, and their famous honey cake.  In the restaurant, they do a lot in a small space, meet the kitchen crew in the closet-sided kitchen where they make all these great meals. 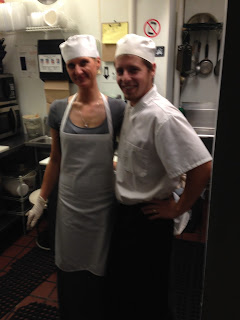 Although the deserts are tempting, particularly the incredible honey cake (also available in their bakery next door), just two blocks away is Tucker's Ice Cream, where they have been making and serving ice cream to Alameda since 1941.  We head down Park Street and get in line, thinking about which of the 34 flavors we're each going to have today.  Then, cone or cup?  Then, if cone, regular or waffle?  I go for a regular cone and mint ice cream with cookies. 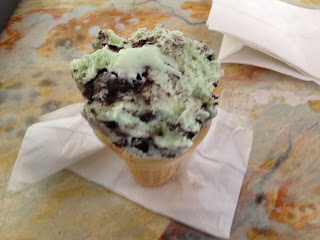 Downtown Alameda is busy as people are still waiting outside the restaurants and we weave our way through the crowd, heading home, a 45 minute walk, just enough to let dinner (and ice cream) settle in.

Posted by Sojourner at 9:18 AM