Walking Along Suzhou Creek in Shanghai

I'm back in Shanghai in the spring and it's time for another morning walk.  Today, I decide to walk along Suzhou Creek (also called the Wusong River), from the Shanghai Railway Station to the Bund, where the creek flows under the historic Waibaidu Bridge into the Haungpu River.  The Shanghai Railway Station is northwest of People's Square, about a 45 minute walk (or 3 stops on Metro Line 1 if you're in more of a hurry).  On the way, I pass the new Natural History Museum and through the Jing'An Sculpture Park. 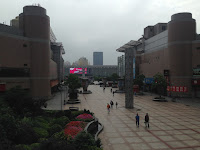 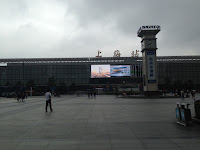 The Shanghai Railway Station was renovated in 2010 for the Shanghai World Expo and serves locations to the north, south, and west of Shanghai, including the main Beijing-Shanghai trains.  On previous trips, I have caught the high-speed train from this station to Suzhou and Wuxi to visit factories in those cities.  Along with the renovation, the landscaping around the station was updated, providing a restful and attractive environment in contract with the busy station. 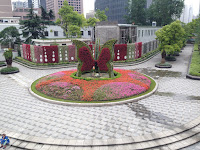 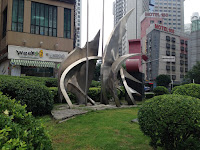 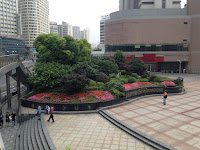 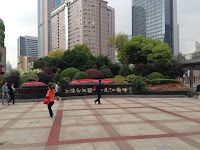 From the Railway Station, I walk several blocks over to Suzhou Creek and follow the path along the creek toward the Bund. 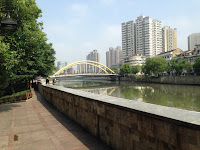 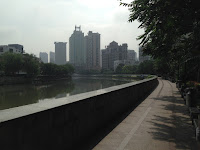 Even though we're in the middle of a very large city (Shanghai's estimated population is 24 million people), the path is peaceful and quiet, an calm oasis in the craziness that is large city life. 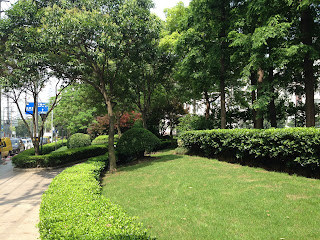 Gardens along the path

Partway down the river, I spot an interesting wall on the side of a building and cross the street to see what it might be. 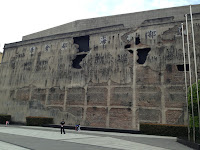 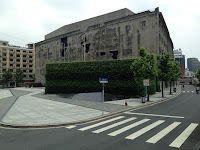 It turns out that the Continental Bank Warehouse was the site of a four-day battle with Japanese troops in 1937.  The building was recently renovated and the design of the west wall reflects the bullet holes from that battle, overlooking an outdoor memorial square.

A block or two closer to the Bund, I spot a ferris wheel peering over a building near the creek and take another slight detour from the path.  The new Joy City mall has installed a ferris wheel, called the Sky Ring, on top of the mall.  The Sky Ring is less than one-half the size of the London Eye, but is quite striking and offers great views of Shanghai. 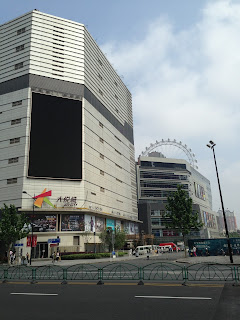 But, enough diversion, it's back to the path along the creek, where I'm approaching the Bund.  The historic buildings and bridges near the top of the Bund serve as backdrops for commercial and wedding photography. 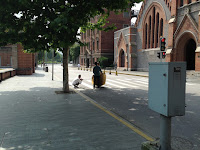 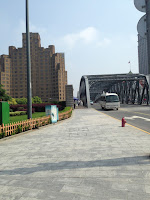 And, after passing under the Waibaidu Bridge, Suzhou Creek flows into the Huangpu River and I round the corner onto the Bund, seeing the classic Shanghai sights on both sides of the river. 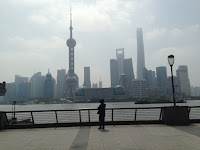 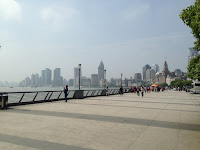 That's enough wandering for this morning, it's time to go to work.