We've been returning to two recipes for pork chops, one on the grill and one in the oven.  They're very very different approaches, but both great.  To start, we use 1 to 1-1/2 inch thick center-cut port chops from our local butcher shop at Encinal Market.

On the grill, we adapt a recipe that was meant for pork loin, Bobby Flay's Pork Tenderloin Marinated in Garlic, Lemon and Oregano with Greek Salad.  The pork chops first rest in a marinade of chopped garlic, lemon zest and juice, chopped oregano and canola oil.  They are then grilled until golden brown.

While the grilled chops rest, we make an accompanying salad by grilling radicchio and tomatoes until lightly charred, then adding sliced English cucumber, pitted kalamata olives (from the Encinal Market olive bar), capers and arugula.  The dressing is red wine vinegar, Dijon mustard, anchovy paste and honey, whisked together with olive oil and tossed in the salad along with crumbled feta.

The grilled pork chop and the salad truly complement each other.

On the other side, Melissa Clark published on the New York Times cooking website (a great recipe resource) the recipe for Braised Pork Chops with Tomatoes, Anchovies, and Rosemary.  These pork chops are first seared in olive oil on the stove several minuted until well browned on each side and then set aside.

Adding a little more olive oil to the skillet, we then sauté thin-sliced red onion and rosemary sprigs (cut from the small rosemary tree we were given for Christmas).  The aroma is great as these cook.  We then add a few minced garlic cloves and continue cooking for a minute or two.  Then two to three pounds of rough-chopped tomatoes and a handful of anchovy fillets are added and cooked until the tomatoes start to break down.

The pork chops are then returned to the skillet, covered and baked at 350ºF for about 15 minutes, until medium.  After resting, serve the pork chops with the onion/garlic/onion/anchovy mixture.  What great tastes! 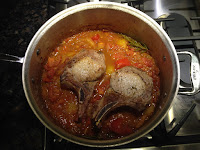 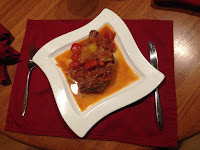 Braised Pork Chops before baking and after plating


This technique of searing, then baking, is one that we have learned to enjoy for duck, steak, salmon, and now, pork.  It's quick and always yields great tastes.\

The blog is running slightly slower for the holidays, but will resume full speed in the New Year.  Have a great Holiday Season!
Posted by Sojourner at 9:27 AM