While we are working at home, we occasionally get out to walk over to and along the San Francisco Bay or to bicycle through town and along the Bay Trail (we get a lot farther on the bicycles).

First we cut through Alameda over to the Bay, glimpsing it at the far end of streets as we pass through the city. 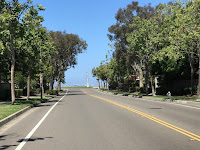 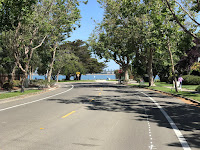 Glimpses of the Bay

Soon we reach the Bay, see San Francisco on the other side, pass the ferry terminal for the San Francisco morning/evening ferry, and start down this section of the Bay Trail, which should ultimately circle the entire Bay, about 500 miles (805 km), passing through all nine Bay Area counties, transiting 47 cities, and crossing seven toll bridges. 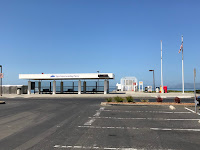 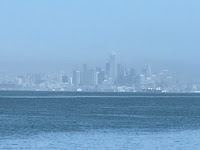 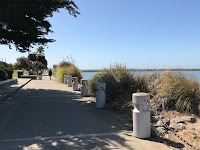 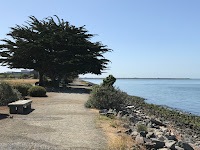 Heading south along the Bay, San Francisco in the distance

The trail leads through the middle of the Oakland Airport and we take a short side trip past the terminals, where not much is happening these days. 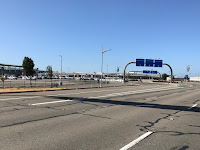 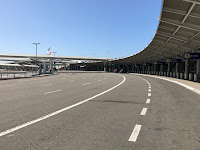 We proceed alongside the Oakland Airport Connector rail link and turn south along the airport perimeter, heading into the Oyster Bay Regional Shoreline, leading us into San Leandro. 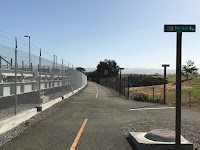 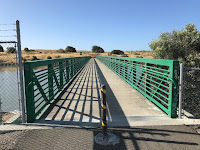 Along the train tracks, leaving the airport area 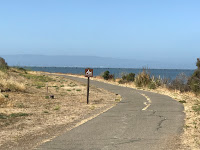 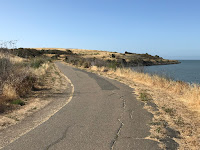 Continuing along the Bay 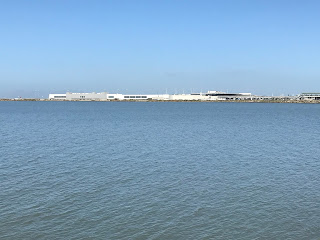 Leaving the airport behind us 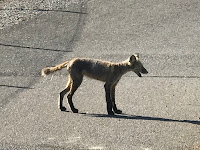 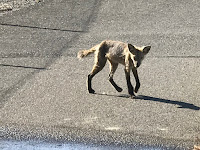 With odd-looking animals sharing the path

We proceed through the shoreline to the southern end near the San Leandro Marina (and FedEx warehouse), turn around, and go back, watching the occasional landing aircraft pass over on final approach. 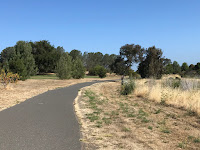 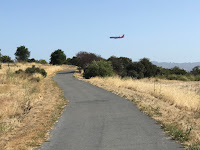 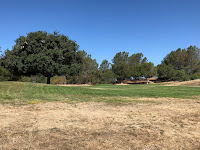 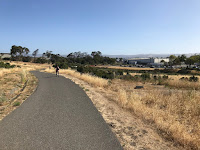 Through the park to the end of the trail 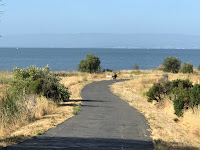 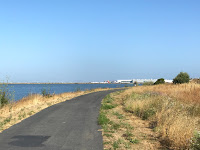 Back along the Bay, reapproaching the airport

We've already done our tour of the airport terminals, so we continue on the trail through the middle, over into Alameda, and back along the Bay. 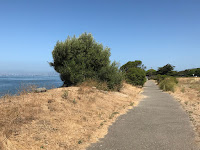 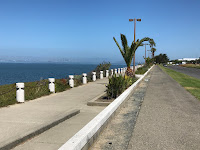 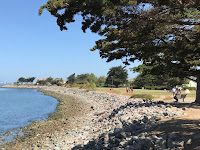 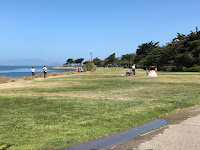 Weaving through the city streets, we make our way over the the Bay Farm lagoon, across the bridge, and back home.  The lagoon system is connected to the Bay and fills from the Bay at high tide and empties into the Bay at low tide, an ingenious system to keep water fresh and flowing through the system. 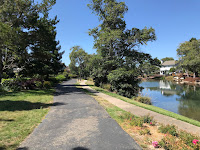 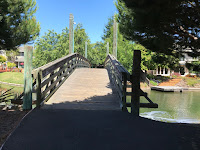 Along the lagoon and over the bridge 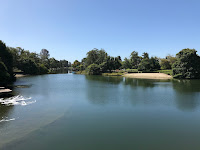 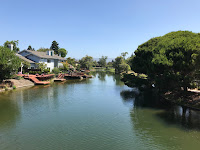 Views up and down the lagoon

This bicycle ride is about 22 miles (35km), taking 1.5 hours or so.  The winds along the Bay are often gusty (often 20-25 knots, 35-45 km/hour), making for a challenging and rewarding ride (especially into the wind) in addition to the beautiful scenery along the way.
Posted by Sojourner at 7:30 AM