We learned about speck, a smoked ham from Italy's Alto Adige region, during our trips to Bolzano, the capital of Alto Adige, in the Dolomites 123 km (76 miles) from Innsbruck, Austria.  The Innsbruck train station actually has a speck shop, with many assorted varieties and speck sandwiches for the train.  Speck is much lighter in flavor than the heavy smoked hams of the northern Alps, but more robust than prosciutto. 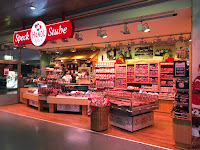 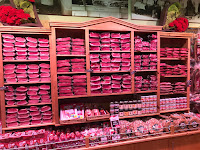 In Bolzano, we had speck risotto for dinner one night, looked for a recipe when we got home, and discovered Stracchino and Speck Risotto.  Until now, we have not found Stracchino cheese and have been substituting Bergamino di Bufala that we find at The Cheese Counter in Oakland's Rockridge Market Hall.

On our holiday trip to New York, we discover Stracchino cheese at Eataly and purchase about 200 grams (just under 1/2 pound) and several thick slices of speck.

We make batons from the thick slices of speck and roll and fry thin slices which we obtain at Market Hall Foods in Berkeley. 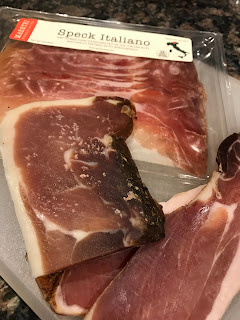 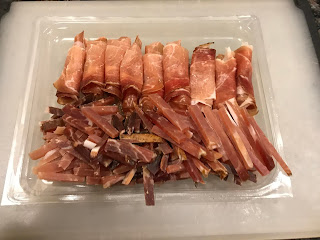 Stracchino is an Italian cows-milk cheese with a soft, creamy texture and a mild, delicate flavor.  We will also use fresh-grated Grana Padano, which we recently brought back from Italy in a 1 kg (2.2 pound) slice. 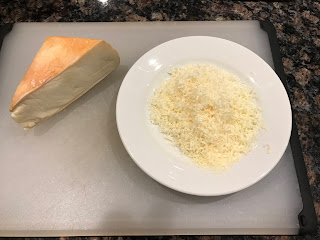 For the risotto, we use about 320 grams (3/4 pound) of Carnaroli rice with a long grain and a firm texture, grown in several provinces of northern Italy. 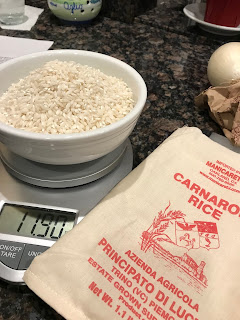 We fry the speck in olive oil until the batons and rolls are crunchy and set them both aside.  We then sauté the onion in olive oil, add the Carnaroli rice, cook until translucent, add the wine, and burn off the alcohol.  We slowly add the stock to the rice over about 20 minutes, stirring until the rice is ready, adding the thick speck batons about half-way through. 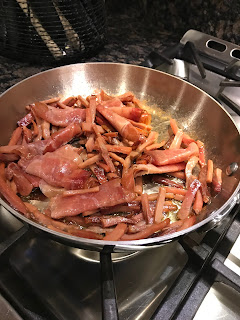 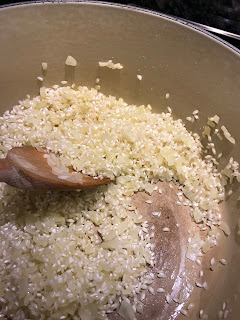 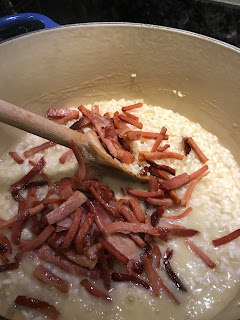 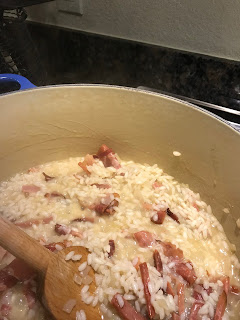 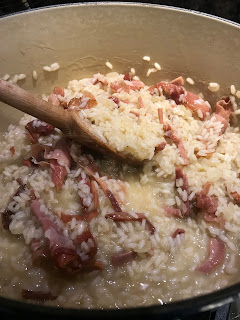 Preparing the rice and speck batons

When the rice is ready, we add the butter, Stracchino, and Grana Padana and stir until creamy 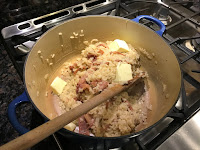 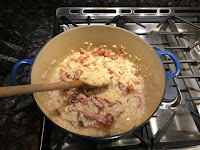 We serve with the crunchy speck rolls on top. 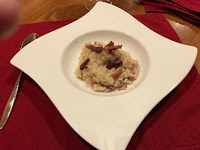 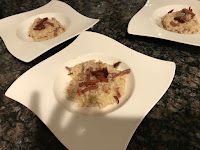 We've finally made this dish exactly as specified in the recipe and it is fabulous!
Posted by Sojourner at 7:30 AM