Arriving and Wandering Around Shanghai

I arrive in Shangai and splurge for a fast trip from the airport, spending 40 RMB ($5.76 USD) to ride the Magnetic Levitation (Maglev) train into the city.  This train is the fastest high-speed electric train in the world, using magnets to raise the train above the tracks and propel it forward at up to 431 km/hour (268 miles/hour).  Once in the city, it's a short hop on the Metro to my hotel near the Shanghai Railway Station, changing trains in People's Square Station, the main east-west and north-south interconnection station in Shanghai (in addition to serving as a major destination station for offices, parks, malls, and tourist attractions) and one of the busiest Metro stations in China with over 700,000 passengers per day. 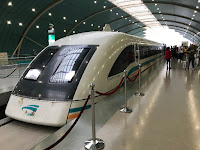 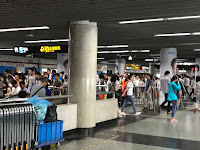 I immediately head out and start to wander around the city, visiting familiar sites and finding some major changes from my last visit a few years ago.  Shanghai is always reinventing itself and its various districts and a lot has changed recently.  I immediately notice that the Wusong River passing by the hotel is still tranquil, with quiet walkways along both sides, but many of the small neighborhoods along the river are now new high rise apartments.  The view from my hotel room, which used to look across the river toward Nanjing Road, now looks into new apartments across the street. 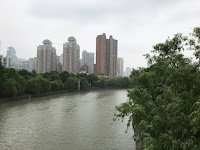 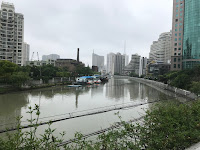 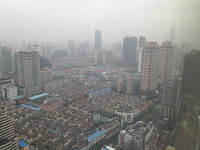 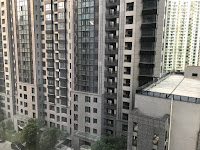 Down along the Huangpu River, just above the Nanpu Bridge and below the Bund, recently-built commercial buildings on the river are being demolished to build a new entertainment district. 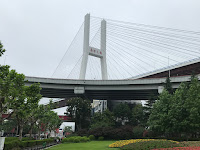 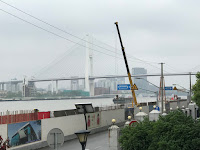 New construction above the Nanpu Bridge

But, among all the hustle and bustle, the city still has its sense of whimsy and humor. 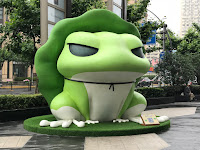 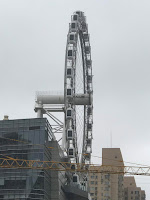 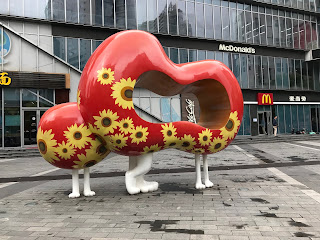 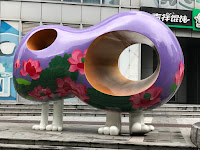 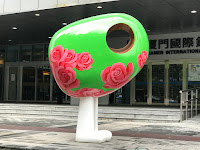 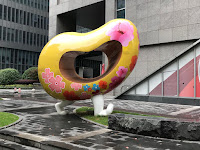 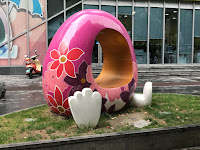 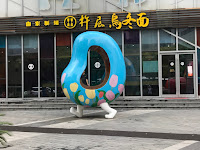 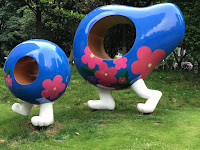 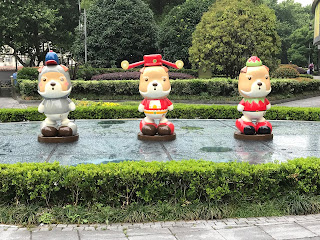 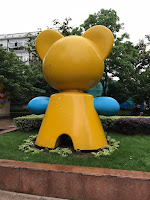 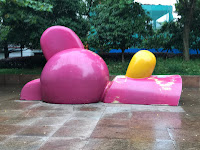 Randomly found while wandering the city

I visit a favorite small park at the top of the Bund, just at the Waibaidu Bridge over the Wusong River as it flows into the Huangpu River, to see the current seasonal topiary and floral sculptures.  This time, the park is in transition (as is the rest of the city, but at least this one will be done soon) and I view a work in progress. 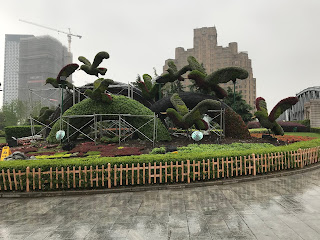 It's good to be back in Shanghai and I'm looking forward to new adventures in this great city, visiting some old favorites and finding new and exciting places that I haven't seen before.  There's a reason that Shanghai keeps drawing me back!
Posted by Sojourner at 7:30 AM