Walking north from Printemps on Boulevard Haussmann, we see the dome of Sacré-Coeur in the distance.  We jigger-jagger through the streets, continuing toward Montmarte, the large hill in the north of Paris famous for its artistic history and the Sacré-Coeur Basilica.  In the late 19th and early 20th century, Montmarte's residents included Monet, Renoir, Toulouse-Lautrec, Mondrian, Picasso, Pissarro, and van Gogh. 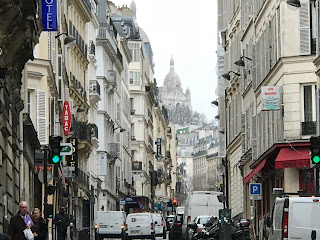 Sacré-Coeur in the distance

One neighborhood along the way catches our eye for all the great food shops and we stop to admire  the incredible-looking offerings. 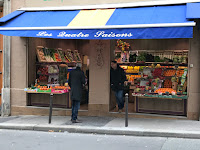 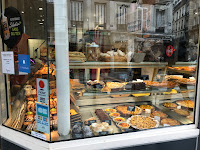 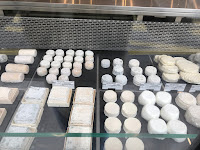 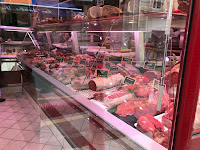 At the base of the hill leading up to Montmarte and Sacré-Coeur, the streets become narrow cobblestone ways and the stairs up sometimes are the fastest path. 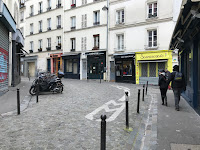 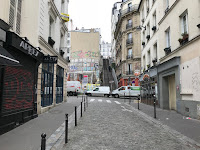 In Place du Terte, the main  square of Montmarte, the artist have set up their displays and the restaurants are preparing for the spring and summer crowds. 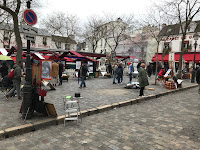 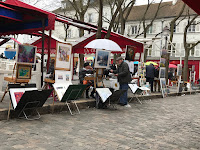 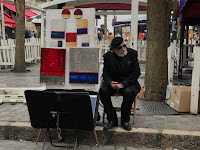 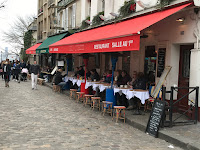 We grab a table at a restaurant in the square and settle in for lunch, Moules Mariniere (mussels with wine, cream, garlic, and parsley) and Croque-Monsieur (baked ham and cheese sandwich), with frites (french fries) and a small pitcher of wine. 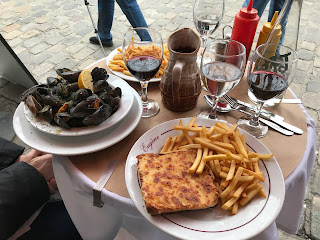 After lunch, we walk over to Sacré-Coeur, located at the summit of Montmarte, the highest point in Paris.  We walk through the cathedral and then back out to the fabulous views of the city.  Sacré-Coeur was finished in 1914 and consecrated in 1919 (delayed five years by the First World War) and was dedicated to the 58,000 lives lost during the Franco-Prussian war (1870-1871). 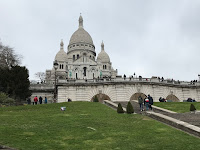 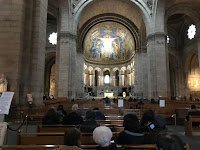 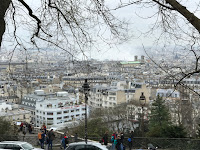 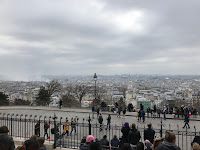 Views across Paris from Sacré-Coeur

Descending from Sacré-Coeur, we walk through the Pigalle district, down Boulevard Clichy, past notable landmarks, including the Moulin Rouge, the famous Paris cabaret founded in 1889. 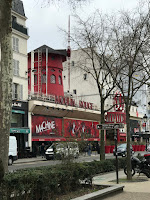 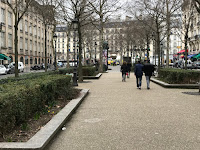 One more site catches our eye on the walk back to our hotel near the Arc de Triomphe:  just outside the Gare Saint-Lazare train station is a new sculpture of luggage.  Fun and whimsical. 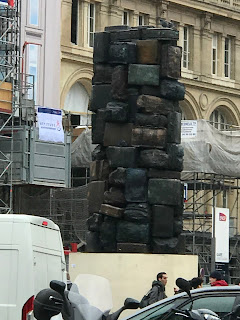 We wind up this walk at our hotel and start to think about dinner.
Posted by Sojourner at 7:30 AM