One local story claims that Wat Phnom is the hill from which the city of Phnom Penh drew its name.  The first Buddhist pagoda was built on this hill in 1373 and legend has it that a Khmer woman was wandering by the riverbank one day and discovered four statues of Buddha in a tree.  She constructed a small shrine on a hill to protect the site and, over time, the hill was raised to 27 meters (89 feet) and maintained as a sacred site. 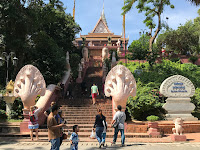 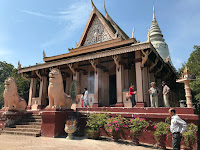 Wat Phnom on the hill

In 1434, King Ponhea Yat established a city around Wat Phnom and named it Phnom Dom Penh, which was soon shortened to Phnom Penh.  Inside the temple on top is a central alter with a large bronze seated Buddha and many other statues and items of worship, along with many worshipers. 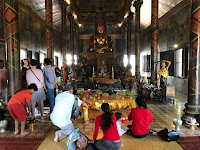 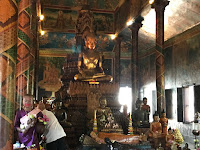 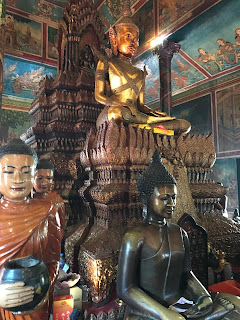 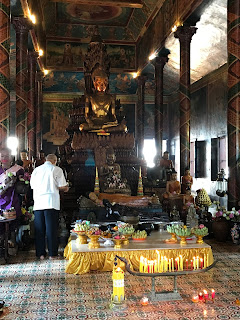 On the grounds outside the temple, at the top of the hill, are many smaller areas of worship, full of people on this beautiful day. 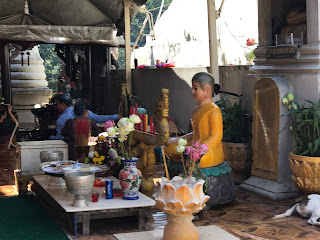 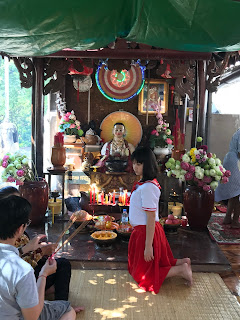 Several entrepreneurs are selling small birds out of cages that people purchase and set free.  Releases of captive bird are often performed in Buddhist rituals and, as bird sales appear to be slow today, one of the vendors is handing them to his son, who is taking great delight in releasing them. 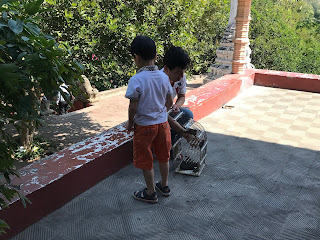 Walking down from the temple, I look back up at the striking architecture of the important place. 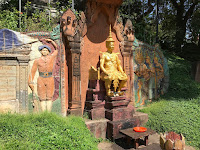 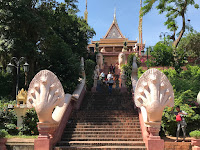 Circling around the temple, I find a great clock built into the ground on one side, large enough to be read from all around the square. 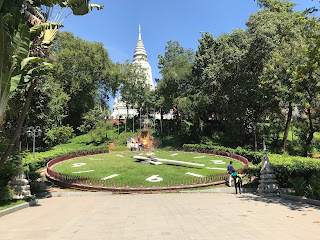 Wat Phnom is a part of the very old history of this town, but is still updated and maintained and very much a part of the current-day Phnom Penh.