We've been to Philipsburg several times, both while staying on Saint Martin/Sint Maartin and, two years ago, taking a Windstar cruise that started and ended in Philipsburg.  Philipsburg is on the Dutch side of Sint Maartin (Saint Martin on the French side), the island has been shared between the Kingdom of the Netherlands and France since 1648, with roughly equal populations in both areas, but 60% of the land on the French side.

We schedule an excursion in the afternoon, sailing on an America's Cup yacht and spend the morning at the beach.  Many of the restaurants on the beach boardwalk in Philipsburg rent umbrellas and chairs on the beach, often with beer included for a flat price ($20 for 2 chairs, umbrella, shower, wifi, and a bucket of beers).  As we walk away from the cruise terminal, the prices get better and we meet Sweet Andy, who offers us a deal and we settle in for a few hours of relaxation, swimming, and a beer. 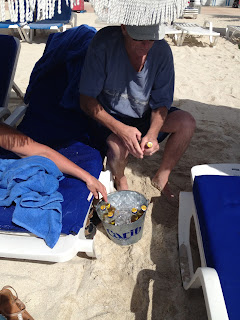 Beach setup and bucket of beer 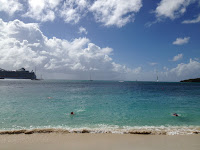 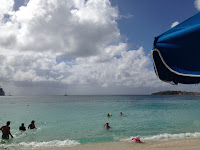 Looking out at the water

In the afternoon, we walk over to the pier and catch a shuttle boat that takes a group of us to three America's Cup yachts, where we split up among the boats and race.  We get to participate in operation of the yacht (I'm a main grinder and have to crank away on a handle as the sails are changed).  This adventure is a little wet and we can't use our cameras, with the hard work we have to do on the boat (we are racing in an Americas Cup yacht!) and all the water flying around, we wouldn't have had much chance.  After the race (our yacht, sadly, did not win), we stop in the America's Cup shop for a rum punch. 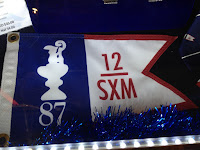 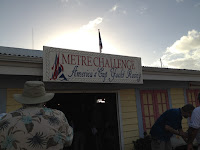 Stopping at the Americas Cup shop after the sail

From the shop, we  walk back to the cruise terminal and note that there are a few very large ships alongside us, including the Royal Caribbean Allure of the Seas, which carries over 6000 passengers and 2,384 crew members.  That's large!  While sailing on the Americas Cup yachts, we talk to someone off one of the large ships and he said that all they do is stand in line for everything. 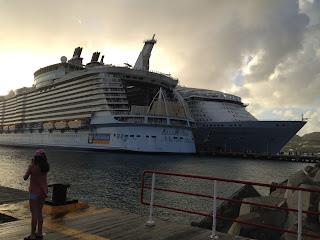 Allure of the Seas and another large ship

We're quite happy with our 200 or so passenger adventure on the Star Legend, never a line! 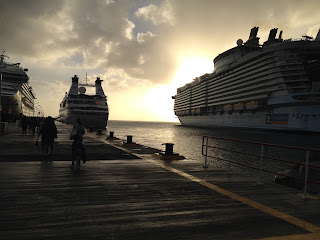 Star Legend, Allure on the right
Posted by Sojourner at 4:54 PM