A Surprise Visit to St. Kitts

We wake up in the morning as the anchor drops just off Little Bay, Montserrat, in the British West Indies.  Montserrat has an active volcano that is one of the most studied in the world, causing two-thirds of the islands population to flee between 1995 and 2000 and still continuing to affect the island (the old airport was covered by volcanic flows in 2010).  But, as we peer out at the island, the captain announces that the seas are too rough for us to go ashore safely and we pull up the anchor and head to St. Kitts, where there is room at the pier. 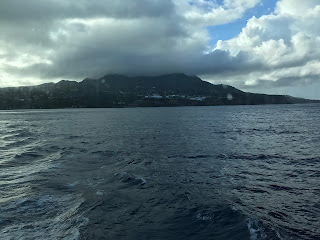 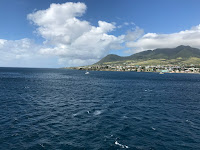 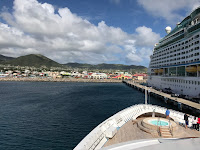 Approaching St. Kitts, pulling up to the pier next to a big ship

It is Boxing Day and St. Kitts is celebrating with a big party in the streets of Bassaterre.  Bassaterre was founded in 1627 and has been a center of trade for the eastern Caribbean, becoming capital of the island in 1727 when the British took control from the French.

I wander, enjoy the bands, and take pictures of the festivities.  The streets are lined with stalls selling food and beverages and the side streets have bands playing great Caribbean music. 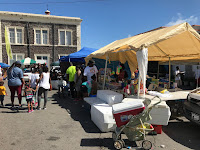 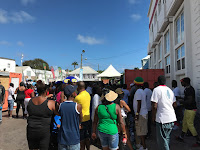 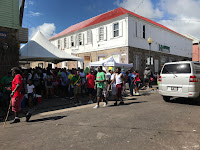 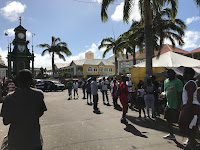 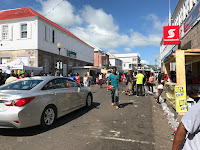 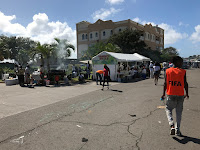 The large crowds (and inebriated people) are somewhat intimidating and only a few of us venture down the packed streets.  We stand out, but people don't pay any attention to us, they just go on enjoying their day.

Meanwhile, back at the cruise boat terminal, Laura and Jennifer have settled in for a beer and I head back and join them. 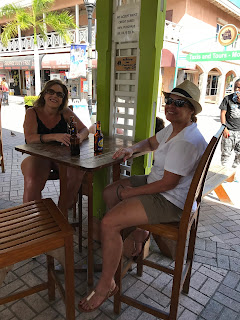 Relaxing at the terminal

Another relaxing day in paradise.