Singapore has several distinct ethnic areas, two of which are next to each other and I can wander through both on the same day:  Little India and the Malay area of Kampong Glam (glam for "glamorous").  As I walk from my hotel over to the entrance of Little India, about a 1/2 hour away, it begins to pour and I hide under a covered walkway for a while as I watch people slip and fall on the wet leaves on the sidewalk (not realizing that I too will suffer the same fate several times later that day).  Eventually, the rain lets up for a short while and I make my way across the street into Little India. 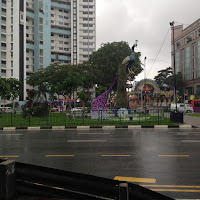 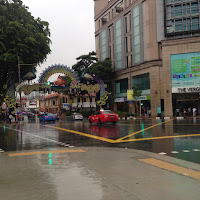 Little India is crowded, but quiet.  This is the time of the Diwali Festival and the streets will be lit and active after dark.  I'll come back later.  Meanwhile, I wander. 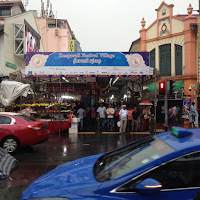 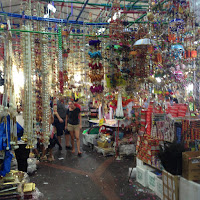 Small alleyway market, outside and inside 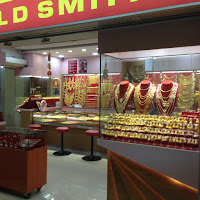 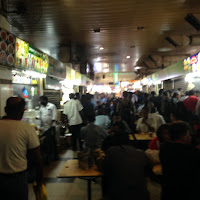 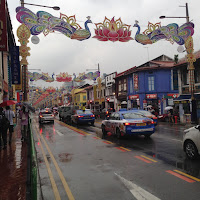 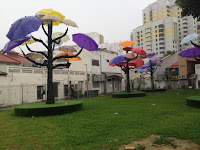 Streets decorated for the festival, art in a vacant lot 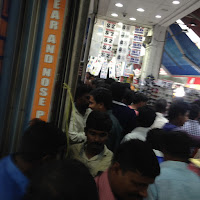 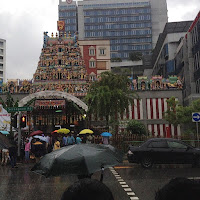 Crowded sidewalks (in the rain), temple across the street

After wading through the crowds, all of us on the same covered sidewalks as it pours outside, I make my way to the edge of Little India, cross the river, and enter the Malay district, Kampong Glam. There, I immediately find the Sultan Mosque (Masjid Sultan, hard to miss, it stands out above the shops and homes of the district).  My favorite is that the sign on the side of the mosque notes that they have received their ISO 9001 certification (I'm used to the ISO 9001 international quality management system certification for technology companies, but never thought about it with respect to a mosque)! 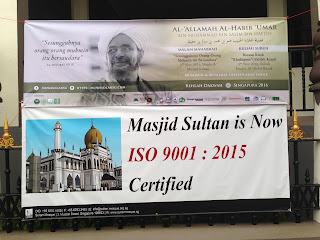 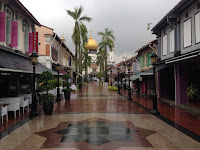 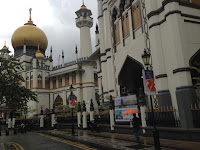 I wander a bit in the rain here also, then head over to the river, to a more modern Singapore (not much is happening here in the rain).  I'll come back later when the rain stops and the people come out. 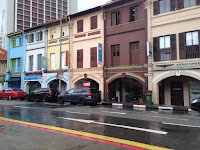 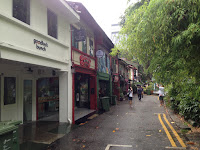 I pass the colonial-style, luxury accommodations of the Raffles Hotel, established in 1887 and where the Singapore Sling was invented in the hotel's Long Bar, and immediately see the highrises of the new Singapore.  And, a few blocks from Raffles, across from the Singapore National Gallery, I see a rugby tournament with action in many fields simultaneously.  I've never seen a rugby match before and stop to watch.  Interesting, but with a lot of body contact. 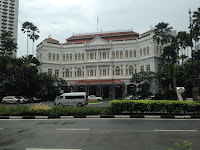 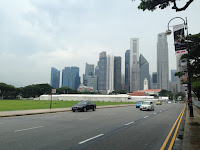 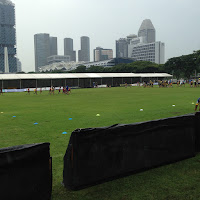 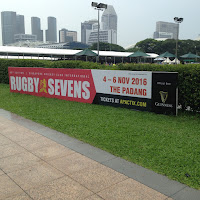 But, it's getting late and I'm meeting ChongBee, who lives in Singapore, for dinner.  Time to head back and make a plan. 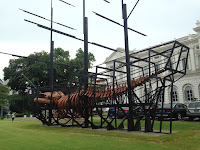 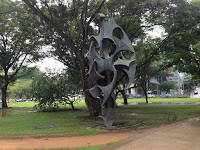 Two sculptures I pass on the way back
Posted by Sojourner at 7:44 AM