We take a short break after the post on our arrival in Sardinia to share a Halloween party we stumbled into in Singapore (more on the rest of our Singapore adventure after Sardinia).  After dinner with a friend in Singapore, we walk through Little Italy to see the spectacular lighting of the Deepavali Festival of Lights, pass through the markets of Kampong Glam (more on these coming soon), and stroll along the river until we reach Clarke Quay, where we plan to stop for an after-dinner drink and some live music.  Clarke Quay consists of five blocks of restored warehouses on the Singapore River with restaurants, bars, and nightclubs that have become a center of Singapore nightlife. 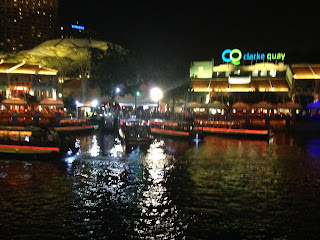 Clarke Quay across the river

As we cross the river and enter the Clarke Quay complex, we see a massive crowd, many of whom are dressed for Halloween.  And, a band in the middle of the complex playing their hearts out, with bands in the bars trying to be heard above the central band that seems to be getting louder and louder.  We have, unknowingly, stumbled into the Clarke Quay Halloween party! 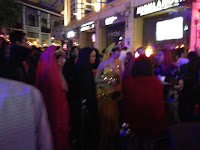 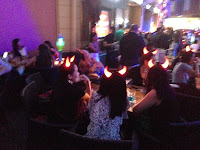 Dressed for Halloween, some moreso than others 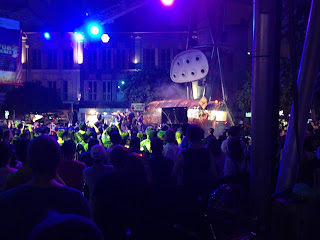 Band in the center of the complex, playing to a packed crowd 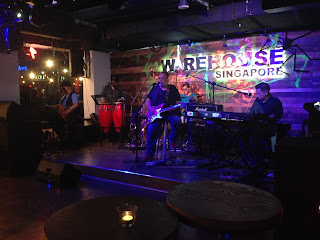 Band in the bar trying to compete

We pop into the Warehouse for a drink, but are seriously underdressed for the celebration, lacking chains, horns, face paint, and/or togas.  After a beer and a set of the Warehouse band, we go back out into the main square, thinking of calling it a night, but a thunderstorm rolls through and it pours like crazy.  We only get a little sprinkle under the canopy stretching between the buildings, but it encourages all of us (older folks) thinking to leaving early to find another bar. 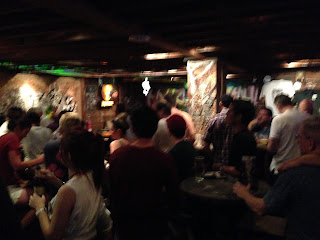 Refuge from the rain, another packed bar, another beer

Eventually the rain slows enough that our umbrellas can hold it off and we wander out and onward.

The next day, I walk over to Clarke Quay to see where I was in the dark and find the remnants of the party. 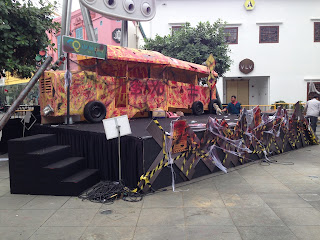 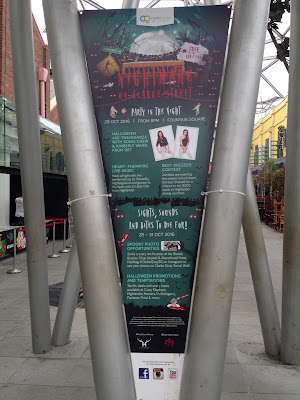 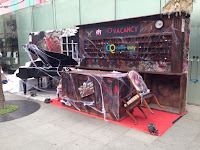 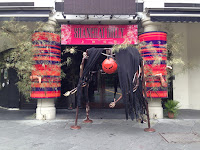 Later, I walk up to Fort Canning, overlooking Clarke Quay and get a view, through the trees, of the five-block complex connected by canopies.  The Singapore River is on the other side of Clarke Quay and we entered the party last night from the river, emerging, several hours later, at the fort. 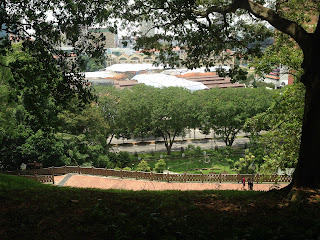 We just stumbled into the party as we wandered through the city, but now we know.  When in Singapore on Halloween, look for the Clarke Quay blast!  Just another example that one must keep wandering -- you never know what treasures you will find!

Now, we return to our regularly scheduled programming....
Posted by Sojourner at 1:51 PM