Heading Back to Italy - Cinque Terre and Sardinia

We're off on another great adventure in Italy, returning to Cinque Terre for a week and then to Sardinia, where we have never been before, for another week.  It takes 26 hours from leaving our house in Alameda, California to our arrival Monterosso al Mare, Liguria, Italy:  car (to SFO), plane (SFO-Heathrow), bus (Heathrow to Gatwick), plane (Gatwick to Pisa), bus (Pisa train station to airport), train (Pisa to La Spezia), and another train (La Spezia to Monterosso al Mare).

Our flight from San Francisco leaves over two hours late (the far-too-familiar routine:  board the plane, then get off with all our belongings, then get back on much later), but, after a few previous experiences, I built in a 7 hour buffer between flights and we easily make our EasyJet flight from Gatwick to Pisa.

As we pass through UK Immigration at Heathrow, we tell the woman that we're on our way to Italy, to hike in Cinque Terre and relax on the beaches in Sardinia.  After she stamps our passports and passes us through, she turns to her colleague and says, "I need a better income so I can go to Italy!"

The National Express bus from Heathrow to Gatwick is convenient, efficient, and reasonably priced.  We had previously taken the London Tube (Heathrow-London) combined with the Gatwick Express (Gatwick-London) train service between the airports and the bus is definitely a lot more convenient! 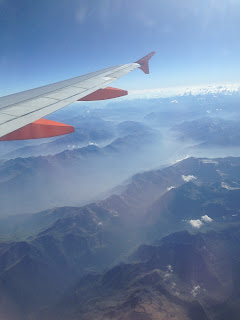 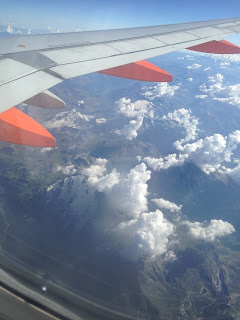 EasyJet crossing the mountains in France, on the way to Pisa

EasyJet is efficient, loading and unloading from the front and back of the plane simultaneously at both airports. 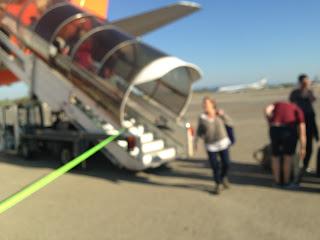 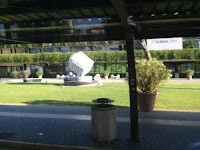 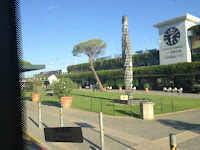 Statutes outside the terminal in Pisa

The new PisaMover automated rail system connecting the Pisa International Airport (also called the Galileo Galilei Airport) and the train station is not operational until later this year, but there is now a dedicated bus link that leaves every 10 minutes between the two and takes 8 minutes for the trip at 1.2 euros each. 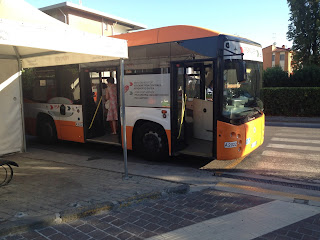 Dedicated bus service between airport and train station
In the Pisa Centrale train station, we pick up sandwiches and Diet Cokes (Coca Lites).  We consider a bottle of wine, but are now 20+ hours into the journey and want to be awake to make sure we get off in La Spezia and find our next train. 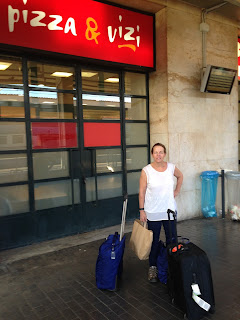 Dinner at the train station 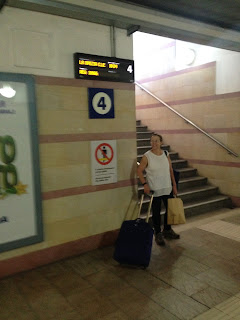 The train from Pisa to La Spezia passes through the mountains and many marble quarries which are still active and give us something to look at as we go by. 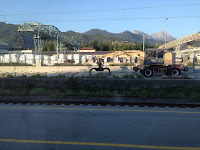 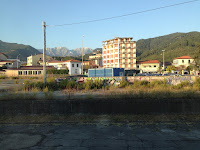 Scenery through the train window

Eventually, we arrive in Monterosso, where the train station has Airbnb hosts waiting for their clients, greeting them like family, and walking them over to their accommodations.  We're staying at our favorite place in town, Hotel Villa Steno, and we wheelie over from the train station, greet Matteo, and have that bottle of wine on the balcony of our room, overlooking Monterosso al Mare and the Mediterranean. 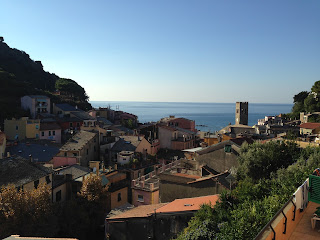 We're here!  View from our balcony

It's been a long trek, but we made all the connections, and have arrived (siamo qui!).  It was worth it!

Posted by Sojourner at 9:43 AM