Back Along the San Francisco Embarcadero

After descending from Coit Tower to sea level (all steps! is that an oxygen-level change?), I'm several blocks from the Bay and head over towards Fisherman's Wharf.  As I get close, I first pass the Boudin Bakery ("home of the original San Francisco sourdough bread"), across the parking lot from the Bay and close to my first stop, Alioto's Italian Seafood, "serving the freshest seafood, family Italian recipes, and the finest views since 1925," to admire the crab on display.   If it were lunchtime, I would be stopping for a crab sandwich, but it's closer to dinner and we have reservations at La Mar Cebicheria Peruana, so I pause to think about the times I've eaten here in the last 44 years (starting in 1972, [much] later on the day after our wedding eight years ago, and a few times a year since then).  I turn back along the Bay past the Red and White Ferry terminal and towards today's dinner. 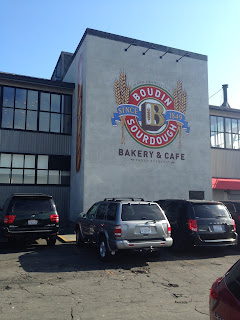 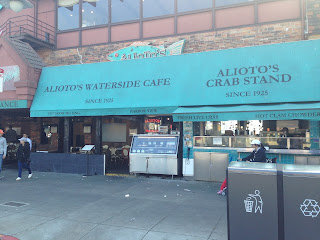 Alioto's crab stand in front of the restaurant 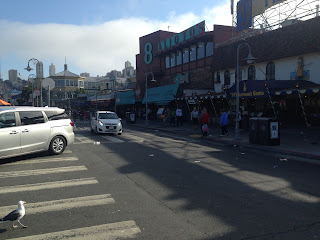 Row of crab stands, Alioto's in the middle
(I always have the crab sandwich and there is always a seagull begging for some!)

Next to the ferry terminal is the Franciscan Crab Restaurant, where we go for fabulous roast crab and, sometimes stop in at the bar for a cocktail, with tremendous views of the Bay from all seats through their huge plate glass windows. 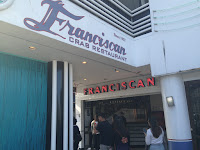 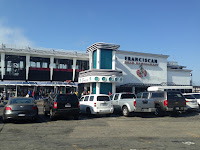 Franciscan Crab Restaurant, Bay on the other side

Just past the restaurant, on the way to Pier 39, I get a great view of Alcatraz and Angel Island. 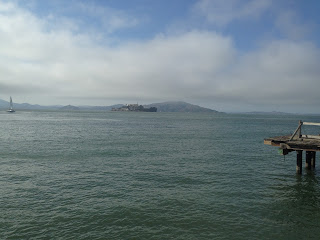 Alcatraz in front of Angel Island

A little closer to Pier 39, the Blue and Gold Ferry from Alcatraz is returning, parking next to great floral displays 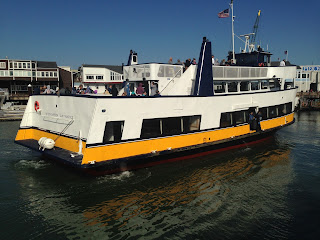 Alcatraz ferry pulling in, pier 39 in the distance 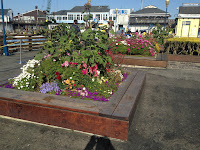 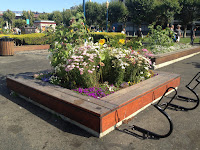 Flower boxes at the ferry terminal

At Pier 39, I wander over to see the sea lions, who took over several docks many years ago and haven't left.  Also, many tourists taking pictures, many foreign languages. 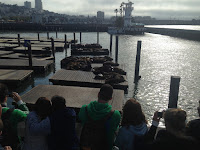 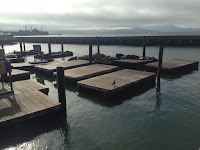 Continuing on down the Bay, I get changing views of Coit Tower, from which I just descended. 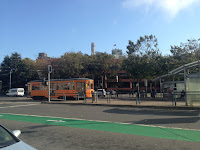 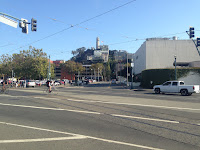 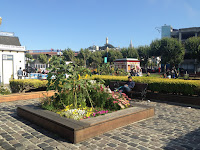 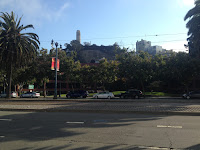 Views of Coit Tower along the Embarcadero

Then, a modern touch, the new cruise boat terminal (no cruise boats in today), followed by an old favorite, Pier 23.  I used to come here for live jazz, dinner, and a drink when I was out from the east coast in the 70s and 80s.  It's still here and still a great place to stop in. 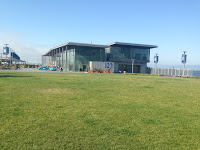 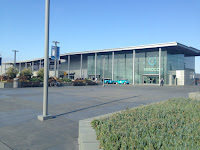 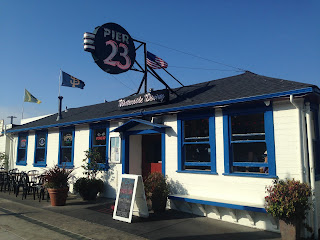 Dinner at La Mar is soon after Pier 23 and I meet Laura there for a few hours of great dining and conversation (next posting).  Afterwards, we head over to the Ferry Building Marketplace, with fantastic shops and packed ferries to Alameda, Lakspur, Oakland, Sausalito, South San Francisco, Tiburon, and Vallejo, used by commuters at rush hour and tourists at other hours.  But for us, it's the subway (BART) back under the Bay and home. 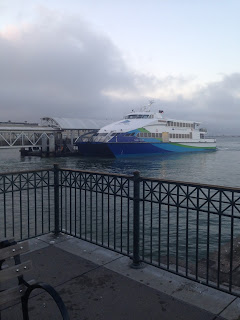 Ferry pulling in at the Ferry Building 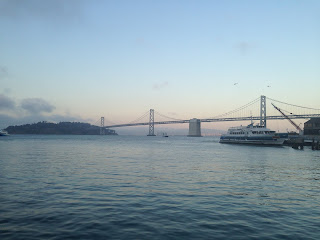 And, looking the other way, the Bay Bridge and, past it, our home, Alameda