We head to Lisbon to join a Windstar cruise, that will take us around the Spanish coast, with stops at a few cities: Cádiz, Málaga, Almeria, Cartagena, Valencia, and Palma de Mallorca, ending up and heading home from Barcelona.  This appeals to us as a great way see places that we would never normally reach and to note interesting spots for future return visits and longer stays.

But, first, a day in Lisbon.  We arrive at Lisbon's Humberto Delgado Airport after midnight and discover that one of us should have gone to the taxi line while the rest waited for baggage.  There are a lot of cabs and a lot of people arriving at this hour, the line is about an hour long.  But, we finally get our cab, make it to our hotel, and settle in for the [short] night's sleep.  Even arriving in the middle of the night, the people at the Fontecruz Lisboa are gracious and welcoming.  The hotel is a new boutique Marriott property with a prime location on Avenida Liberade in the city center, a short walk to the sites.

We head out in the morning and walk to the harbor, where we come into the great Praça do Comércio (Commerce Square) public square featuring a 1775 statue of King José I and a fantastic view down the Tagus River of the Ponte de 25 Avril 2 km (1.2 mile) suspension bridge. 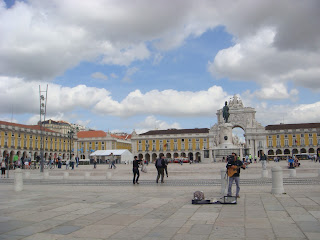 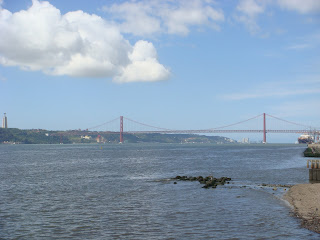 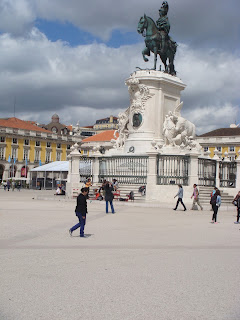 King José I, symbolically crushing snakes in his path

From the public square, it's a steep walk up winding streets to São Jorge Castle,  a Moorish castle overlooking Lisbon and the river.  Streetcars and small carts wind their way up the hill, but we walk to experience the city and see what we can find. 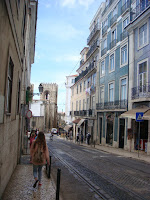 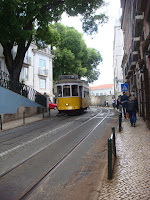 Up the steep, winding streets to the castle 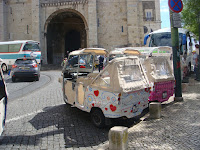 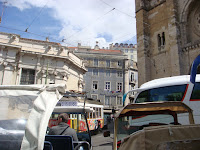 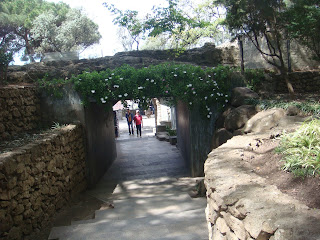 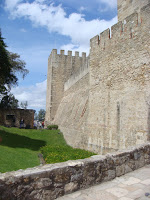 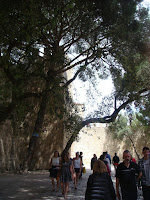 
We pay our admission fee, enter the grounds of the castle and climb up the steps to see the expansive view from the top.  And, we find a truly civilized touch, another cart inside the castle selling glasses of wine to enjoy with the view. 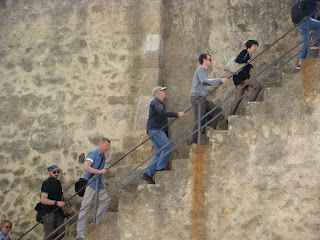 Stepping up into the castle 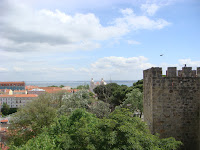 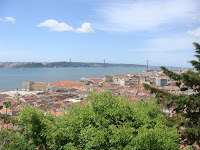 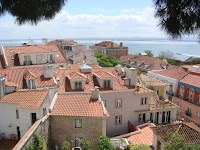 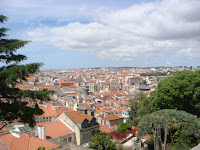 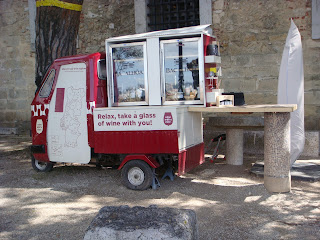 With a glass of wine

We wander through the castle for an hour or two, then start to think snack.  Just outside the castle walls, a small café offers sangria and a sandwich.  Perfect!  We sit outside and a band plays across the courtyard.  Meanwhile, I spill our drinks carrying them out on a tray, but the café nicely replaces them for us (carrying them out to us themselves this time). 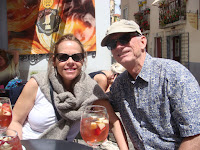 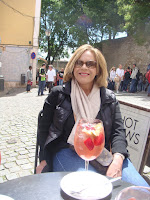 A stop for sangria and a sandwich outside the castle 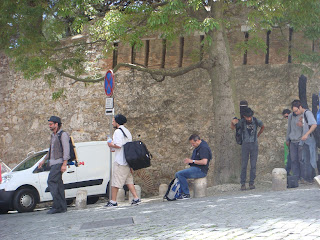 Band packing up across the square

After lunch, we wander back down the hill back to the Praça do Comércio, where the fountains are going strong. 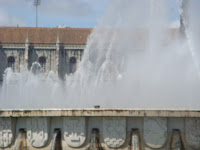 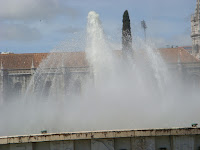 
We then hop on a trolley for the 8 km. (5 miles, 25 minutes on the trolley) trip along the water to the Torre de Belém (Belém Tower).  This fortified tower is a UNESCO World Heritage site and was built in the early 16th century to serve as part of Lisbon's defense infrastructure at the mouth of the Tagus River. 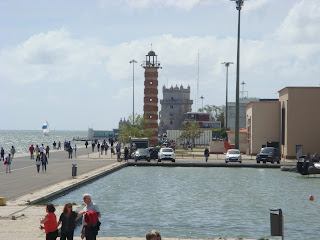 Torre de Belém in the distance

Nearby, the fifty meter (164 ft) high Padrão dos Descobrimentos (Monument to the Discoveries), shaped like a ship's prow, marks the passage of many Portuguese explorers, including Vasco da Gama and Christopher Columbus (on his way back to Spain after reaching the Americas). 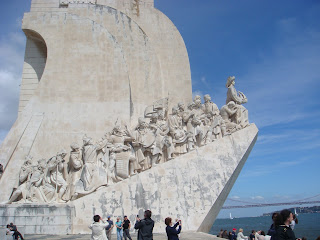 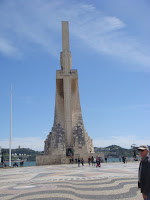 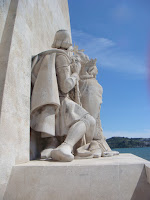 But, most importantly, and not to be missed, several blocks away is the Casa Pastéis de Belém bakery, where they have been creating the original Pastel de Nata pastry since 1837.  These Portuguese custard tarts, with rich egg custard in a crisp pastry, are made by hand every day and sprinkled with cinnamon.  The line to sit in the café or to buy take away in the bakery stretches down the sidewalk.  We elect to sit in the café and have our pastry with a bottle of Portuguese wine. 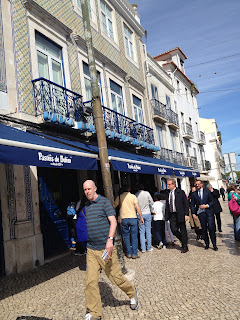 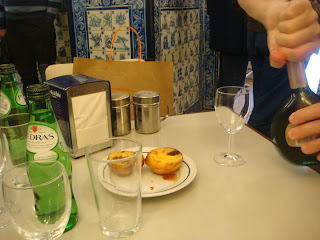 Pastel de Nata and wine inside

After our Pastel de Nata, we wander back toward our hotel.  In our one day in Lisbon, we've had a taste of the city and truly like it.  We have to come back in the future for a longer visit. 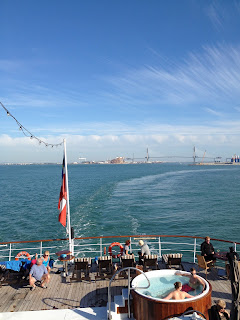 The next day, we sail away

Posted by Sojourner at 7:58 AM