All of these parks, except for Minsk World (aircraft carriers do better on water) are located along Shennan Boulevard, near the Window of the World and Qiaochang Metro Stations. 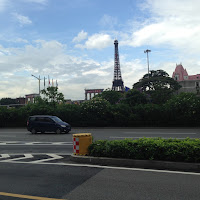 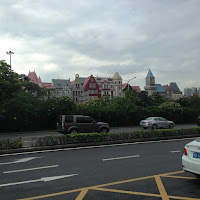 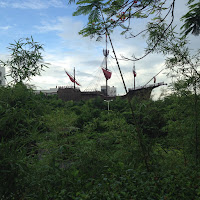 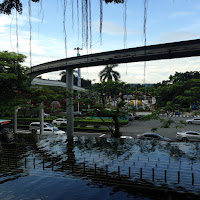 I pass by them and get a few pictures as I walk down Shennan Boulevard, but I don't stop in this trip.

The next day, I walk through one of Shenzhen's many parks and the spring rain returns.  As the smart people hide under trees and in the park buildings, I get pictures in the rain. 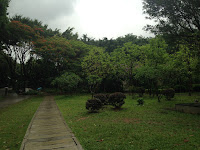 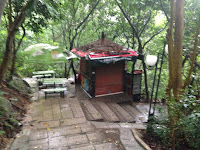 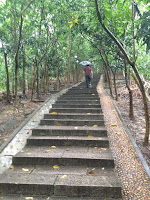 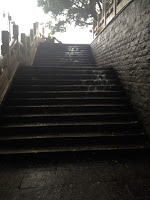 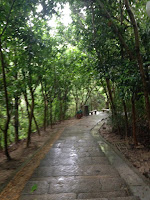 Park in the rain 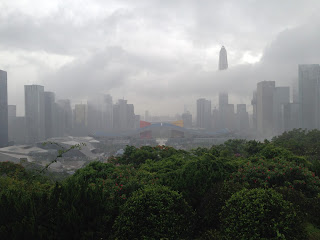 View of downtown from the park in the rain

When it rains in Shenzhen, it pours (note the stream of water flowing down the steps).  I get soaked and switch from my small folding umbrella to the large one the hotel provides, giving me a little more coverage and a little less drenching.

The clouds and rain also give a great view from planes coming in and I get some good pictures this trip. 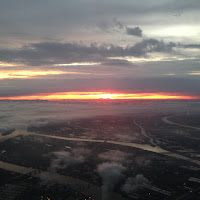 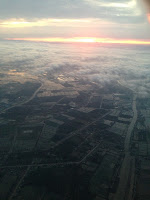 Sunset in the rain on the way to Shenzhen

It was a classic spring/summer flight from Shanghai to Shenzhen, meaning very late.  Some of my friends take the overnight train between the cities to avoid the storm delays in the airport, but I've generally been lucky.  At least, I've always arrived the same day.

This trip, things were looking good and we boarded the plane on time at Shanghai's Hongqiao Airport.  Then, there was an announcement I couldn't hear and everyone got off the plane.  I followed, sat back down in the boarding area and picked up my snack at the counter an hour later. 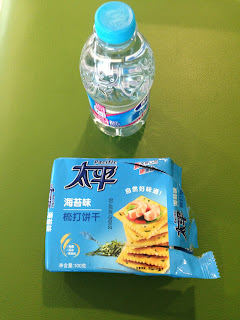 The gate agents said, "Bad weather, don't know when/if we'll go."  But, I figured that Shenzhen Airlines wanted their plane back and, if there was any chance, we would go.  Another hour later, they wheeled the meal carts off the plane into the boarding area and fed us lunch.  Not a good sign.  An hour later, we all got back on the plane and it took off quickly.  But, as we got close to Shenzhen, we started flying in circles and the captain, after a few 360s, announced that more storms had moved back in and we were going to Guangzhou (128 km/80 miles away).  This was a big improvement over one adventure last year when my flight to Shenzhen diverted to Xiamen (615 km/380 miles away) and we were around number 50 in line for refueling.  This time, we landed in Guangzhou, pulled off into a deserted area and had our own fuel truck within an hour.  The storms in Shenzhen quickly moved on and we arrived at sunset, only 7 hours late, giving me the great pictures.

As an interesting note, when I buy my tickets on Shenzhen Airlines directly from their website (the tickets cost a lot less buying direct, generally around $95 for the 2.5 hour flight, although the purchase is in Chinese RMB), I spot a link on their homepage for Foreign Pilots Recruitment.  Clicking through, I see that flying for them is a pretty good deal:  great salary and benefits and they have over 100 foreign captains.  Too bad I'm not at a phase of my life that would let me look into that.

But, it's enough of Shenzhen and time to head home and plan the next adventure.
Posted by Sojourner at 8:30 AM