Cádiz, in southwestern Spain is about 560 km (350 miles) by car from Lisbon.  On our cruise, it's a little under two days away and we spend a relaxing first day at sea to get there.   Cádiz is the capital of the province of the same name, part of Andalusia, an agricultural region with a strong cultural identity.  Wikipedia notes that much of what we consider "distinctively Spanish are largely or entirely Andalusian in origin. These include flamenco,bullfighting, and certain Moorish-influenced architectural styles."

Cádiz is on a small peninsula surrounded by the Bay of Cádiz and the Atlantic Ocean,  The old town is full of charm, with narrow, winding cobbled streets opening into small squares, while the newer areas are modern and contemporary.  The Phoenicians founded trading posts here in 1100 B.C. and the town (then called Gades) was once a thriving Roman Port.  In the early 16th century, Cádiz was a departure point for journeys to the newly-discovered Americas.  Cadiz is considered by some to be the oldest western city, with a strategic location on the coast dividing Europe and Africa.

Cádiz has a warm tropical Mediterranean climate, with strong maritime influences, keeping the temperatures more moderate than nearby inland areas.

Our ship is docked right at the edge of the city and we walk through the large industrial port area to reach the tiled, shaded paths of the promenade at the end of the peninsula.  The grand avenues, squares, and gardens of this city are just made for strolling around and stroll we do. 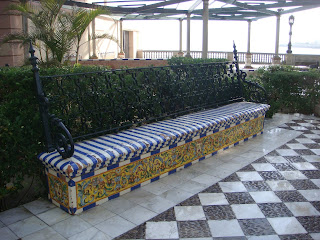 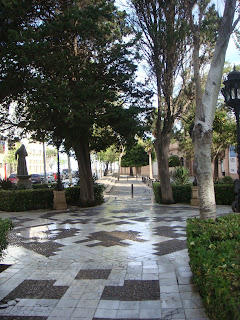 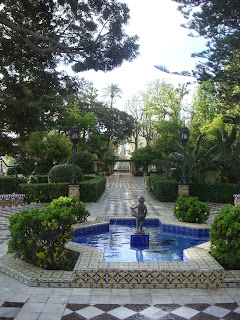 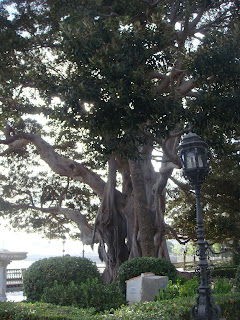 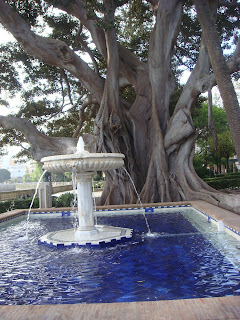 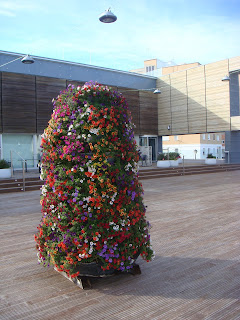 They certainly know how to do a flower pot!

Also, near the harbor is a a fabulous statue by Juan Luis Vasallo, a local sculptor, of a young woman, Gades, looking out to sea.  Cádiz was called Gades in Latin when it was a thriving port and naval base in the Roman Empire. 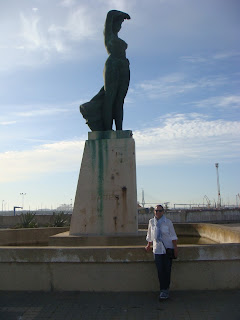 Gades peering out to sea

We first walk around the outside of Cádiz, to the fort on the opposite side of the peninsula from the port. 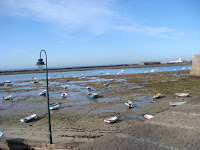 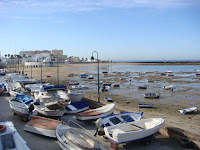 Walking around the town with the tide out

Reaching the ocean side of  Cádiz, we explore the old fort, Baluarte de la Candelaria, constructed in 1672 to control access to the port.  In modern times, the fort has served as a engineering school and as headquarters for the Portuguese Army's carrier pigeon division. 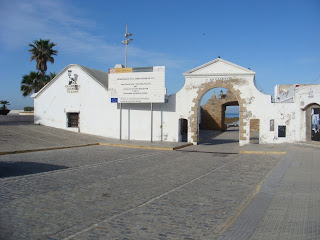 Continuing on past the fort, the cobblestone walkway offer great views of the city and the sea. 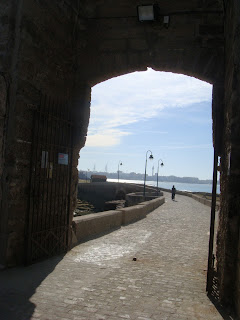 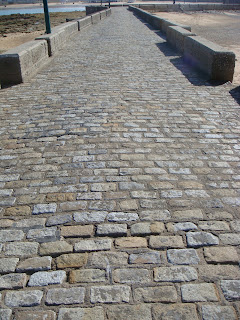 Walkway along the sea 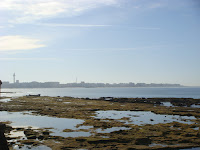 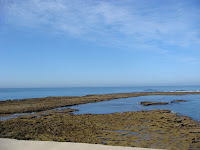 Views of the sea 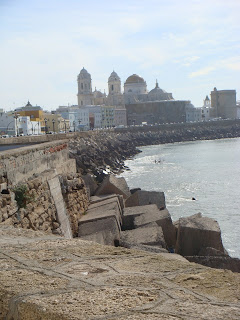 View of the cathedral from the path

As we head back down the other side of the peninsula from the port, it's time to enter the town.  We wander through the narrow streets to the Cathedral and the Plaza de la Cathedral.  The Cathedral has been an imposing site our entire walk, towering over the city from all sides as we wander around the perimeter.  It's just as imposing up close. 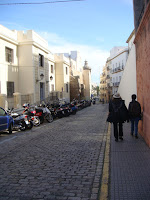 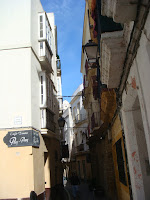 Streets of the modern city and the old town. 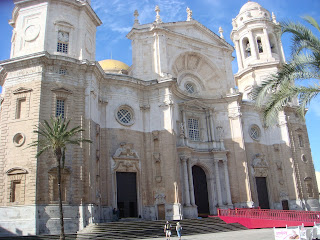 The original cathedral was completed in 1260 and destroyed by fire in 1596.  Construction restarted in 1776 and took 116 years, with numerous changes over time, resulting in a structure with a combination of baroque, rococo and neoclassical elements.

Walking back to our ship, we meet the chef and some of the kitchen staff who have been shopping and have found meats and cheeses that they will feature onboard later today (we get to know the chef and, a few days later, he makes us a special dinner of duck confit).

The city of Cádiz is small, with a population of roughly 124,000 people packed into the 4.4 square km (1.7 sq. miles) of the peninsula.  It's a great city for a stroll through the streets and boulevards and to lounge on the unspoiled beaches.

Later that day, as a special treat, Windstar has arranged for the entire ship to travel to see the dancing horses at the Royal Andalusian School of Equestrian Art Foundation in Jerez, about 31 km (19 miles) away, along with a visit to a sherry bodega (cellar/winery) for sherry tasting with regional tapas.

The Royal Andalusian School of Equestrian Art preserves the classical traditions of horsemanship, from preparation for international competition to the manufacture and maintenance of leather harnesses.  The facility also has a riding school known for its shows demonstrating riding skills and dancing horses. 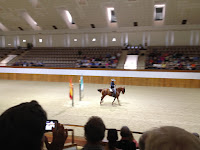 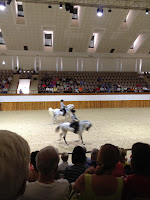 The show was interesting, but we found the sherry bodega tour and tasting more to our liking.  Sherry can only be made in the province of Cádiz, with the perfect combination of soil and climate.  This fertile region is incredibly beautiful and we enjoy the trip and the visit to one of Spain's best known sherry bodegas, the González Byass Bodega, founded in 1835. 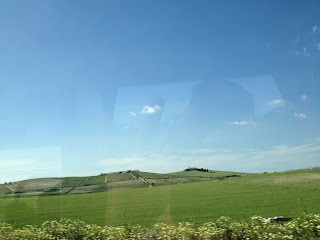 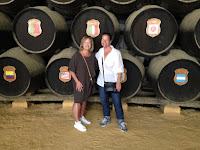 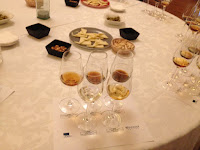 Sherry in the cask and ready for tasting

We've had a busy day in Cádiz and head back to the ship for our next adventure. 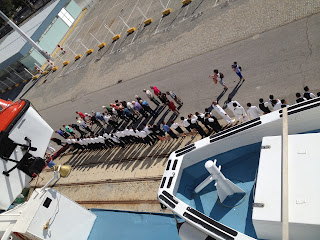 The crew welcomes us back on our return

Posted by Sojourner at 9:27 AM