Bucatini all'Amatriciana is named for the town of Amatrice, about 140 km (87 miles) northeast of Rome.  Amatrice has been inhabited since prehistoric times and has been part of the Kingdom of Naples, Florence, and now, part of Abruzzo.region which stretches from a little east of Rome to the Adriatic.

A quick Google brings up the comment that the region is famous for the Sugo all'Amatriciana pasta sauce, a key ingredient in our dinner today.

First, we spend a few hours making a basic tomato sauce.  If we check some of our regular recipe sources, Mario Batalli's Molto Italiano, Saveur, Bon Appetit, and the New York Times, we come up with very similar approaches.

In our large saucepan, we heat olive oil, then cook a diced onion and several thin-sliced garlic cloves until soft and starting to brown, about 10 minutes.  We then add several tablespoons of chopped fresh thyme and one-half a shredded carrot and cook until soft, about 5 minutes.  I crush two 28 ounce cans of San Marzano tomatoes by hand and add the crushed tomatoes and juice from the cans to the mixture, then simmer it all over low heat, stirring often, until the sauce is thick enough that the spoon leave a trail when I pull it through, often several hours (the recipes say 30 minutes, but I find it that it generally takes me 1.5-2 hours for the sauce to thicken properly).  I also use a potato masher to help break up the tomatoes as needed. When it reaches the thick consistency, I season to taste with salt and pepper. 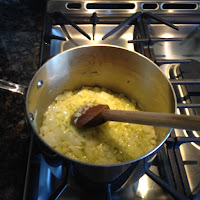 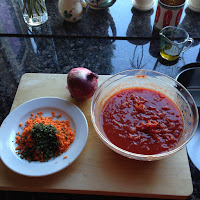 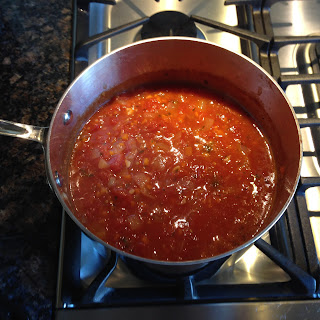 Bucatini all'Amatriciana features a hollow, tubular pasta, bucatini, made of hard drum wheat flour and water.  It is claimed that the hollow inside of the pasta captures some of the sauce, but I've found that I make the sauce thick enough that it really doesn't get inside the pasta.  However, we still enjoy it tremendously, with it's substantial pasta taste. 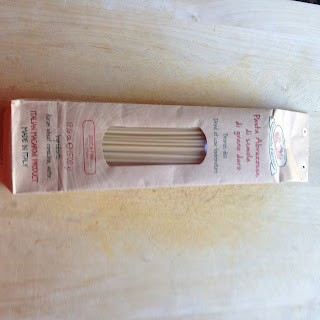 Bucatini all'Amatriciana is traditionally flavored with guanciale, cured pork jowl, which is, however, sometimes hard to find and pancetta is a good alternative.  I use a pound of pancetta, from Scalise Butcher shop inside Encinal Market, in one chunk.  I then cut off the fat and dice the remaining meat.  Traditional recipes call for the guanciale or pancetta to be thin sliced, but I prefer the small dice for a more substantial and crunchy flavor 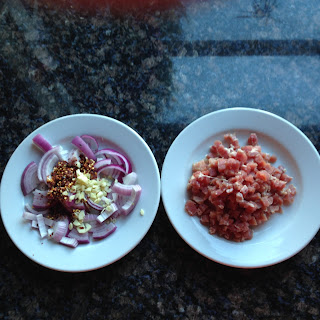 The pancetta, onion, garlic, red pepper flakes are combined in a sauté pan and cooked over low heat until the pancetta starts to get crispy and the onion has softened.  I drain the fat from the pan, add the tomato sauce, and simmer another 5-10 minutes. 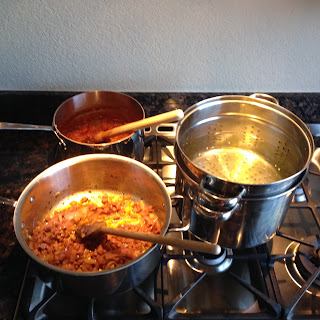 Pancetta in the front, sauce simmering in the back, pasta water warming on the right 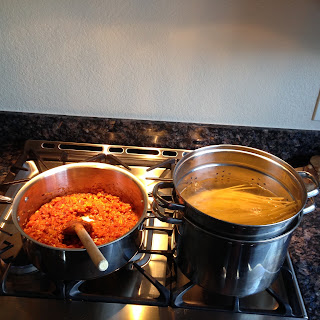 Bucatini cooks in the pasta pot for about 9-10 minutes (1-2 minutes short of al dente), then joins the sauce.  A few more minutes of simmering and stirring, and the meal is ready to serve, preferably in warmed pasta plates, with extra grated cheese (parmigian reggiano for us) on the side. 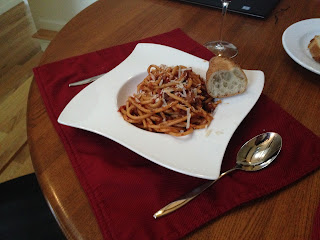 Several of our favorite sources have variations of this recipe.  Our preferred version is Mario's Molto Italiano, but Saveur and Bon Appetit each have intriguing versions..

Although this meal takes a while to assemble, particularly the tomato sauce, the combined tastes are incredible and it's definitely worth the wait.  Also, the tomato sauce can be made in advance and refrigerated for a few days.

We usually only eat half of the pasta and sauce and put the rest in the refrigerator for another dinner later in the week.  We find that, a few days later, the tastes have matured and combined, yielding a truly great second meal.