After lunch, we wander through the Gaslamp Quarter and into Little Italy, on our way back to our car parked by the airport.  San Diego's downtown area is tucked between the San Diego Bay on the west/southwest and the hills and Balboa Park on the north and east.  Downtown is composed of nine districts and we have already walked through the Marina and Seaport Village, a tourist district in the Marina, on our way to the Gaslamp Quarter.  On our way back, we'll wander through the Horton district with the Horton Plaza massive outdoor mall and Little Italy. 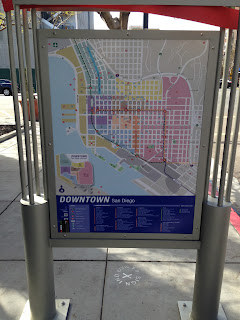 In a square outside Horton Plaza, we encounter a statue of Alonzo Horton, founder of the current downtown San Diego.  In 1876, Horton purchased 800 acres of downtown property from the city for $265 and developed the property to become the new city center, replacing the Old Town to the north, where the first Europeans in California originally settled and, in 1769, Father Junipero Serra established the very first mission in a chain of 21 missions that were to be the cornerstone of California’s colonization. 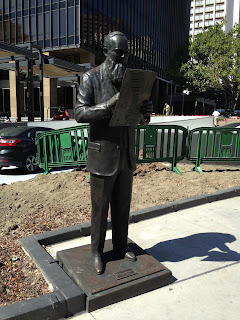 After leaving the square with Alonzo Horton's statue, we come across a grand old hotel, the US Grant, opened in 1910 and built by Ulysses S. Grant, Jr., son of president Ulysses S. Grant. 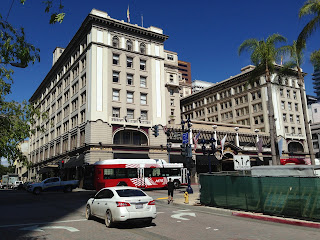 Next, Little Italy, originally an Italian fishing neighborhood, but now restaurants, shops, stores, galleries, and apartments.  We see a lot of good-looking Italian dining opportunities (too bad we just ate), but the most popular one is a surprise, a Mexican restaurant with a kitchen and a window through which they sell food to walk-up business.  People are lined up and standing around eating the great food. 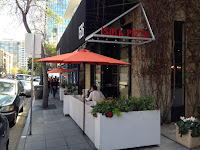 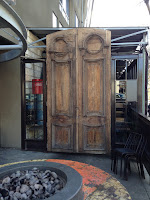 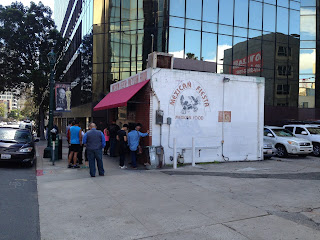 Past Little Italy, we turn left, back to the Bay, and come across City Hall, a historic Spanish-style building completed in 1938.  Two years ago, the parking lots next to the City Hall were converted to a Waterfront park with open grassy areas, a playground, fountain and sculpture. 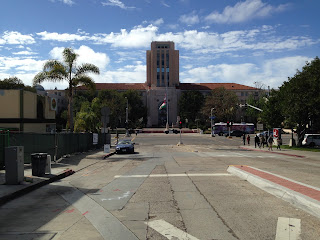 San Diego City Hall (San Diego Bay on the other side) 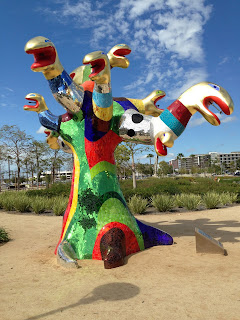 We stroll back up the Bay to the airport, passing the sailboats, Coast Guard helicopter base, and then the airport itself. 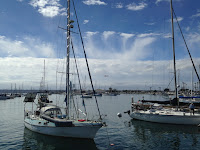 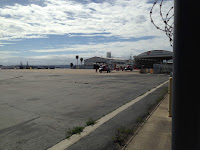 Helicopter coming in over the sailboats and after landing

Just outside the entrance to the airport, we find a San Diego DecoBike station.  DecoBike is a bike sharing system rolled out in 2011, now with 180 stations and over 1,800 bikes located throughout the city.  What a great idea - walk off your flight and hop on a bike to go where you want. 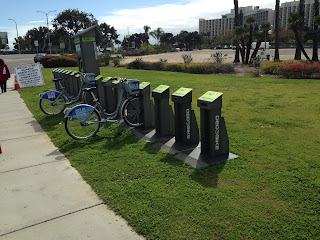 But, it is time for us to get in our car and head up the coast about 30 miles to Carlsbad, with one last look back along the Bay at the city from where we walked. 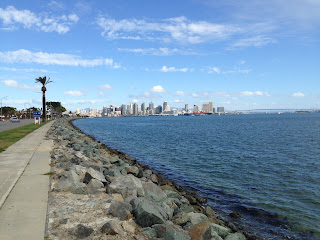 View of the city from our parking spot