A Day in Grenada

From St. Lucia, we head over to Granada for a day, roughly 200km (130 miles).  We spend a day at sea to get there, then wake up at the wharf in St. George's, Granada, in the charming freight port (not the big cruise boat terminal). 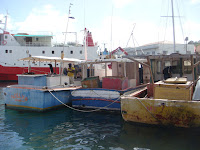 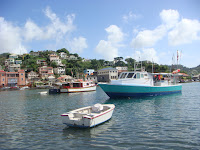 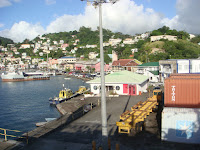 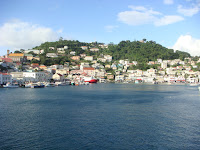 Tied up at the wharf in St. George's

We decide to go tubing on the Balthazar River with Grenada Adventure Tours.  Unfortunately, we don't have any pictures -- we leave all the cameras and phones behind as we each put on our life vest and helmet and hop into a tube to shoot through the rapids.  It has been raining for several days and the river is flowing fast so we experience fast currents and strong rapids, bounce off rocks, and get stuck in quiet coves where the Grenada Adventure Tours staff wade over and push us back out.  They make this a real adventure, guiding each tube through the best part of the rapids and we have a lot of fun!  Our only complaint is that it's too short.  We could continue down the river for hours.

On returning, we wander through St George's, the capital of Grenada, which was founded by the French in 1650, passed to the British in 1763 and became independent in 1974.  In 1983, the U.S. invaded Grenada, as one local explained, "to prevent Cuba and the Russians from taking over."

St. George's has around 5,000 people of the 34,000 or so on the island and is divided by a large hill.  We take the easiest path through (rather than over) the hill to get to the spice market, sharing the one-lane, 340-foot Sendall Tunnel with cars and other folks crossing through. 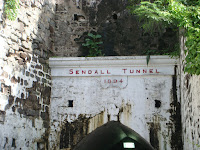 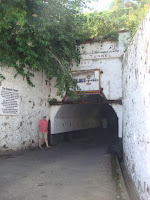 On the other side of the tunnel is the main [large] cruise boat terminal, but we head the other way, to the right a few blocks to the market square, packed with spice stands.  Granada grows and exports nutmeg, cinnamon, cloves and ginger.  The smells are great and we stroll through the stands and eventually buy some nutmeg to take home (but not in the stands, rather, in the supermarket on the wharf, which has the spices at better prices for local cooking).  Grenada is the second largest nutmeg exporter in the world, after Indonesia. 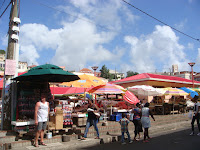 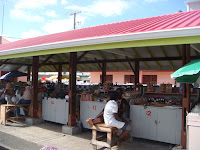 We walk back through the tunnel and pop into a gallery on the harbor.  We buy some fun local art, charming metal metal fish that catch our eye, just missing the artist by a few minutes. 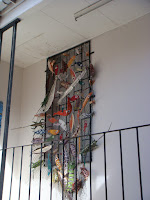 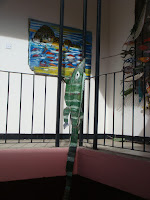 Metal fish in the gallery

Then, the sun sets on our day in Grenada and we settle in for a relaxing dinner. 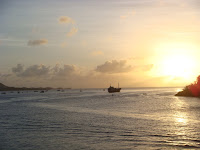 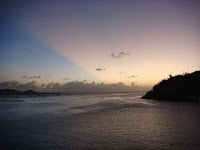 Looking out from St. George's as the sun sets 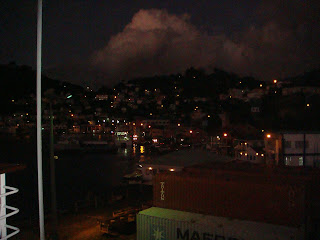 Looking back at St George's at night 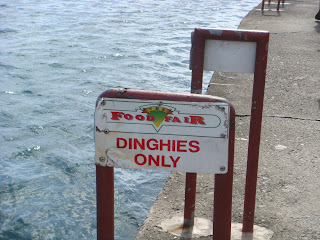 Posted by Sojourner at 8:26 AM