This trip we are hiking in the Dolomites, northern Italian Alps that were declared a UNESCO World Heritage Site in 2009, and in Cinque Terre, in the Liguria region on the Italian Riveria.

But first, the trip from San Francisco.  We catch the United non-stop flight to Frankfurt, with a connection on Lufthansa to Innsbruck, then an OBB Austrian Railway train to Bolzano, the capital and largest city in South Tyrol.  This is a long trip, but starts with a funny misunderstanding as we check in at United.

The United gate agent is putting tags on our two bags and I comment to him that we are looking forward to arriving in Frankfurt and heading to the Lufthansa Senator Club for sekt.  He looks up, startled, and says, “What?”  I reply, “You know, the German sparkling wine.”  The agent looks relieved and says, “You know, I wasn’t really paying much attention and thought I heard something else.”  We thought about possible mishearings, laughed, and said, “Well, Lufthansa may be flexible, but they’re not that flexible.”  Under his breath, almost to himself, the agent mutters, “They’re not flexible” and hands us our tickets.

We laugh as we head through security on begin our adventure.

Another unexpected twist awaits us at Frankfurt.  We walk up to our gate for the Lufthansa flight to Innsbruck and see a 747 parked there, but only a few people waiting.  We’re thinking, “Wow, that’s a big plane to go to Innsbruck, there will be a lot of room for us to spread out.”  Well, then the announcement comes that the Innsbruck flight is to be boarded by bus and we go down the stairs, past the 747, and get on a bus to the far side of Frankfurt Airport.  As we arrive at the plane, it turns out to be a twin-engine propeller aircraft from Austrian Airlines (“A proud member of the Lufthansa family”).  No room to spread out here!

In Innsbruck, our connection to the train station is quick and efficient by local bus.  We get off the plane onto a bus and see that our luggage is off the plane and headed toward baggage claim before all the people are even off the plane and onto the bus.  We grab our bags, purchase two 1.8€ ($2.04) bus tickets at the Tabac after baggage claim, hop on the bus, and we’re at the train station about 20 minutes after we get off the flight.  At the station, we see our first speck shop.  Tyrolian speck is a distinctive smoked, cured ham and we’ll be eating a lot of it the next few days, and loving it! 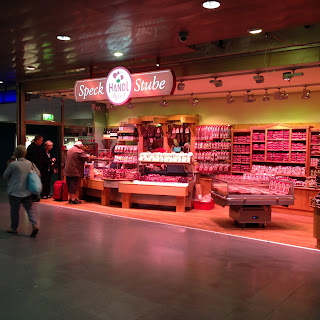 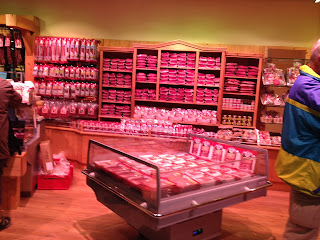 Inside of the Speck shop
The train ride down to Bolzano winds through the Austrian Alps, then into the Italian Alps, with incredible views.  Here are a few: 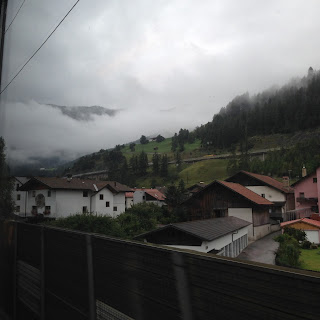 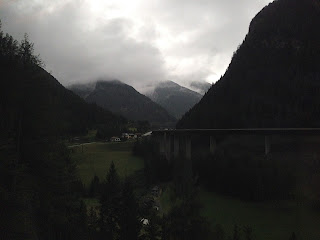 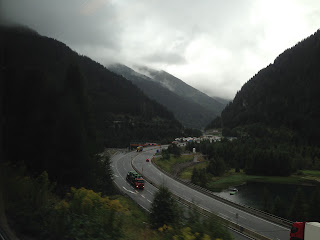