The Bolzano Festival of the City - Altstadtfest 2015

Our first day in Bolzano, we are sitting outside in the main square, Piazza Walther Platz, having a a glass of  prosecco and we see a group of people setting up a tent in the square in front of us.  We ask our server what is going on and she tells us that the “Fair of the City”, which happens every two years (Altstadtfest 2015) is starting Friday and lasting over the weekend.  Over the next two days, we see workers setting up tents, booths, bandstands, and tables in every square of the city.  We’re truly lucky in our timing to arrive this weekend and are looking forward to seeing the fair (other than our hotel notes that the bands play until midnight and it might be a little difficult to sleep before then).

We head off on our explorations, then return in the evening for the fair.

Piazza Walther Platz has 2 to 3 bands playing in it at any one time, and several food tents, beer/wine stands, and food stands. 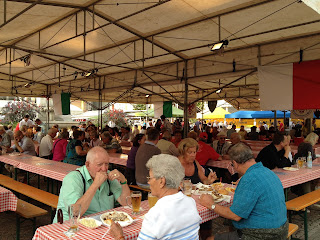 Food tent in the main square 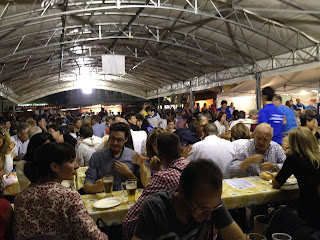 Food tent in a smaller side square 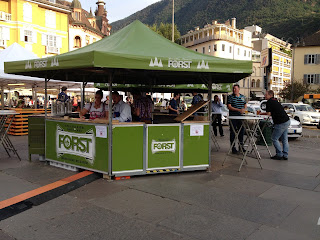 Beer stand in the main square

Servers in lederhosen take orders at the picnic tables in the tents and bring out food and drink. 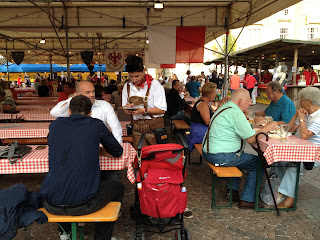 Taking orders in the food tent

It seems all the squares in the old city also have bands and food tents.  The fair is spread out though the city, so that no area is truly packed and people can get around and enjoy the festival.  There is no charge to sit and listen to the music and the food and beer/wine is very reasonably priced (13 euros or $14.78 for a bottle of local wine).

We walk around, listen to a few bands with many different kinds of music.  One band starts “I Shot the Sheriff” four times, each time stopping after a while and restarting the song.  After the final stop, they put down their instruments and leave.  Fifteen minutes later they’re back and they nail it.  We suspect they went out and Googled it! 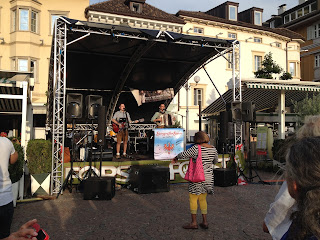 Band playing in the main square 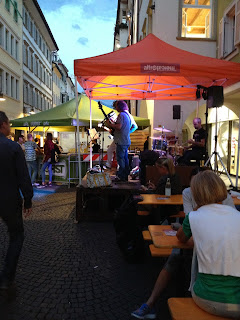 On a side street 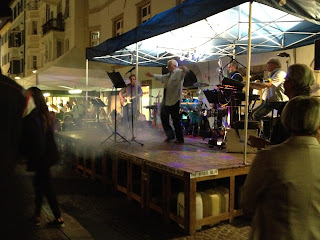 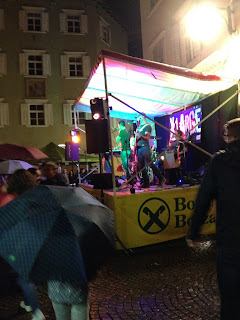 On another side street 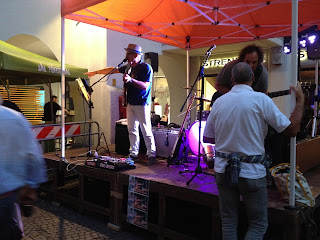 And yet another side street

We dance a little to some of the music, in our elegant hiking/dancing shoes, surprising the crowd around us.  One of the servers yells, "Bravo" and we give him a big thumbs up. 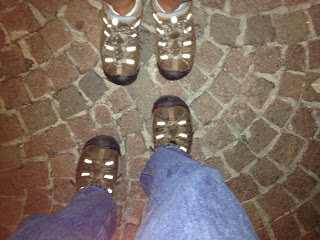 We eventually settle in to listen to a German brass band, something we can’t get at home. 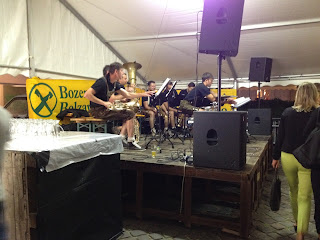 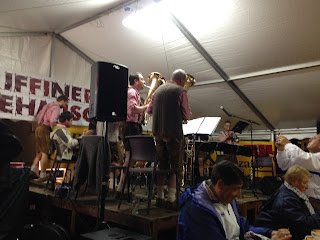 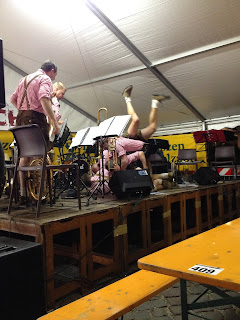 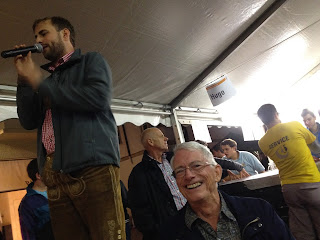 Hopping on the table and singing next to me

Most of the other people in the tent know the songs and are singing along.  We just smile and enjoy it.

Everyone in town is in the festival spirit.  We spot one young woman with her festival T shirt (if you can read the message). 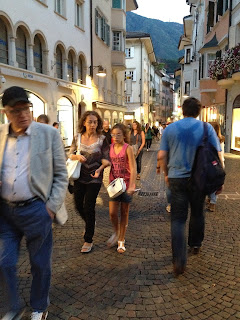 We wander back to our hotel before midnight, and listen in our room to the music coming in from Piazza Walther Platz for a while before drifting off.

In the morning, we catch an early (7.:11am) train and see the German Brass Band members, still in lederhosen, waiting with their instruments for a train to their next gig.
Posted by Sojourner at 8:11 AM