When I’m on my own for lunch in China, I typically duck into a Family Mart to pick up a sandwich.  There seems to be a Family Mart on every corner and everyone stops in for something:  sandwiches, salads, dumplings, soft drinks, green tea, beer, … 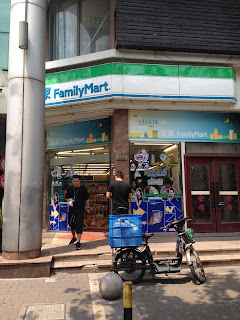 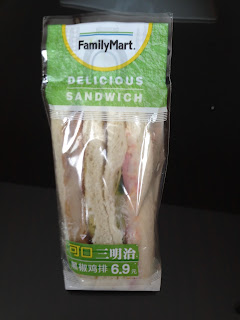 If I was feeling more hungry, there are steamed bun stands and shops everywhere and they are popular!  People stop on their way to work and take one with them or line up at lunch time.

Traveling between cities, I'm reintroduced to a long-lost friend - the free airline meal.  Here's lunch served by Shenzhen Airlines on a  2 hour flight between Shanghai and Shenzhen, chicken with rice.  Or, perhaps I should say, rice with some chicken (it is, after all, still an airline meal). 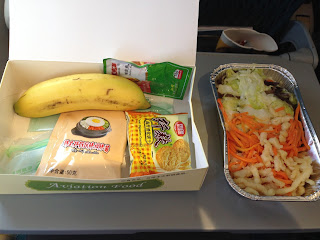 But, when I’m meeting with with friends or business partners, we have a more substantial lunch.  Lunch for four in Shanghai this time features duck.  I told Fisher last time that I liked duck and he tracked down a Beijing  restaurant.  We also had soup, dumplings, beef, fish and probably a few other dishes I can't remember. 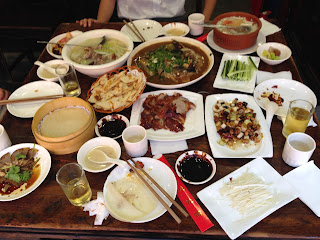 Fisher acknowledges that he always overorders and does take some back to the office afterwards.  But, as another friend in Shanghai, Wilson, explains, it is considered incredibly rude to not order enough food.  When Wilson was courting his wife, he would have dinner with her uncles and order for the table.  He had to make sure that there was more than enough food for everyone and that there was a good, complementary variety of dishes if he wanted to get their approval.

A few days later, lunch for five in Shenzhen once again focuses on Beijing duck. 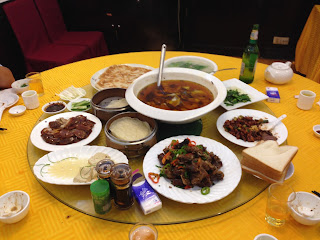 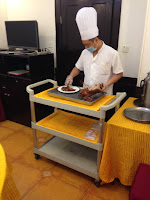 The duck is carved in the room with us.  First, slices of skin are eaten, dipped in sugar.  Then tender portions of duck meat are dipped in bean sauce and rolled up in steamed pancakes with onions and cucumber sticks.  While we're eating this, two more dishes from the duck arrive.  The remaining meat is chopped up and served on a plate, while everything else (bones, meat, fat) is made into a broth.  Wow!

And, since Shenzhen is on the Pearl River Delta, there is also great fish.  The large bowl in the middle contains strips of a white fish cooked in oil, with lots of spicy peppers.  When the dish is served, the hot peppers are skimmed off the top and the fish in hot oil is set on the table.  We each have a plate of white bread that is not eaten - the fish is scooped out and put on the white bread to drain and soak up the oil.  I then pick up the fish off the white bread with my chopsticks and eat it.  I'd never seen this before and had to have it explained to me (the look on my face as they gave me a plate of white bread gave it away!).

The waiter tells us that the son of the owner has opened a competing restaurant several blocks away and they have a friendly rivalry.  We'll have to try the son's place next time.

Dinner in Shenzhen demonstrates the basic difference between lunch and dinner:  liquor! 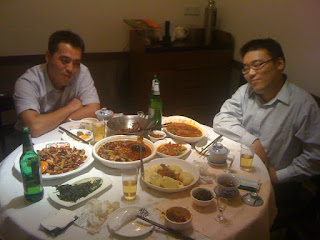 Particularly potent is the Chinese white wine, Baiju.  The Chinese have been making baiju for over 5000 years, and Gary brought a bottle that his friend had made at home.  We opened it after the beer ran out and, after the first few glasses, it went down smoothly and quickly.  The only problem was that the next day, the ferry to Hong Kong Airport kept rocking in the waves.  Baiju is recommended for dry land.
Posted by Sojourner at 9:30 AM