I get to Shanghai three or four times a year, basically about once a quarter.  I arrived this time around 7:30 pm, after a 12½ hour flight from San Francisco (or, as I like to think about it, 6 movies and 3 meals), and, of course, leaving San Francisco 4½ hours late due to several aircraft maintenance issues

I used to take the Metro from the Shanghai Pudong Airport (PVG) to the hotel in town, at 7 RMB (a little over a dollar), it’s a great deal for the 1.5 hour trip into the city.  But, for a few more RMB, I cut an hour off the journey by taking the Magnetic Levitation (Maglev) Train about 2/3 of the way, then hopping on the Metro at the Longyang Road Station (with only 7 stops to the Peoples Square Station, near my hotel and the main tourist area of Shaghai, as opposed to 18 stops from Pudong).  The Shanghai Maglev Train is the first commercially operated high-speed magnetic-levitation train in the world, operating since 2002, and costs 40 RMB (about $6.45) when I show my same-day plane ticket. 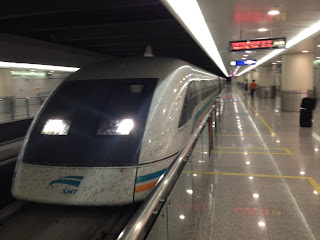 
The Maglev train runs from PVG straight to the Longyang Road Station in eight minutes, reaching a peak speed of 301 km/hour (187 miles/hour) on my trip, with a maximum operating speed of 431 km/hour (268 miles/hour).  It’s smooth, efficient, and many of us rush to the front of the car to take a picture of the peak speed on the indicator when the train reaches the middle of the journey. 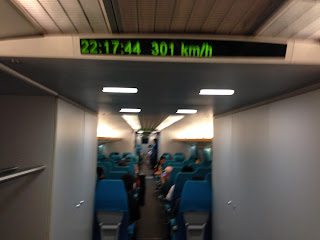 I generally ride the Shanghai Metro all around the city to my meetings.  It’s clean, cheap (most of my trips in the city are about 45 minutes to an hour for 4 RMB (65 cents)), goes just about everywhere, and the escalators generally work. Transfer from the Maglev train to the Metro at Longyang Road Station is quick, although I have to stop any buy my 4 RMB Metro Ticket and run my suitcase through another X-ray machine at the entrance. 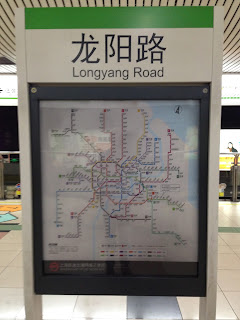 Riding in from the airport, sometimes luggage is problematic as I roll through the busiest station, People’s Square, at rush hour, when thousands of people are changing between Line 1 and Line 2 at the same time.  People’s Square Station reports a daily traffic of four hundred thousand people, through the station, every day.  That’s a lot!  I have to be careful to not wheelie over someone’s foot as I weave through the crowd.

This is also my way of acclimatizing to arrival in China.  On the trains, you see real people going about their daily business.  I just board and take it all in.  I’m back!
Posted by Sojourner at 12:17 PM