Laura and I marched in the 2015 San Francisco Pride Parade on Sunday with the USTA (United States Tennis Association) and the LGBT Tennis Network.  We had great T-shirts that said "LGBT Tennis Network" on the front and "Tennis for Everyone" on the back.  We were group number 211 in the parade, with an estimated start time of 1:30.

The parade began at 10:30 and we were asked to be at the staging area by noon.  I watched the parade start on television at home and as the lead group, Dykes on Bikes, rode by the TV cameras, I optimistically noted, “We’ll be there in 3-1/2 hours or so.”  Little did I know.

We rode over to San Francisco on BART and had to wait for a train with room for us.  With the parade and a SF Giants game at the same time, BART was running longer trains using their weekday schedule, but they were still packed.

We staged on Beale Street, ½ block down from the parade route on Market Street, so we could wander up and watch some of the 210 groups before us march by 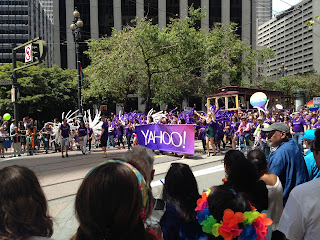 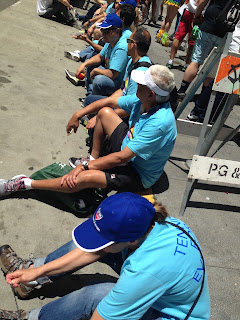 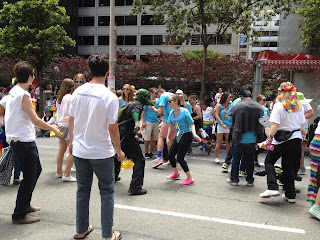 playing tennis in the street with the big rackets the USTA sent for us to carry. 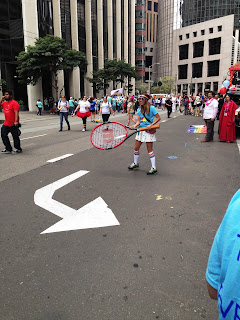 Finally, about 3:45 we started our amble down Market Street, behind the Cancer Society and a group of cancer survivors and, several groups ahead of us, the Bay Area Furries. 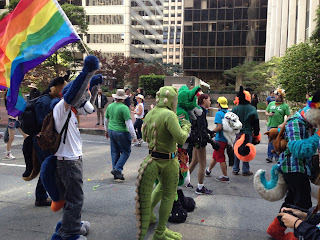 The parade had been going by for over 5 hours so far, but the crowd was still alive and enthusiastic as we went by.  A lot of cheers for tennis!  We were handing out screen cleaners to the people lining Market, with information on how to access the LGBT Tennis Network app in the Apple App Store or Google Play Store. 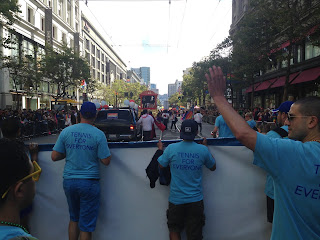 We finally passed the TV cameras around 4:30, waving at the cameras and the hosts who had been sitting there since 10:30.  But, the reviewing stands near the end of the parade were basically empty as we reached them a little after 5, folded up our banner, and hopped back on BART for the ride home.  And, the Giants won!
Posted by Sojourner at 10:30 AM