The four acre estate housing the tomb of Southern Song Dynasty (960-1279) General Yu Fei is located at the upper end of the Bai Causeway on the northeastern corner of West Lake in Hangzhou.  General Yu and his army continuously won wars against the Jin Dynasty (1115-1234), but, at the end of a war, Yu was falsely accused and secretly killed in jail by his rivals.  In 1163, Yu Fei was exonerated and his corpse reburied in the current tomb, where he is now considered a national hero.  Yu Fei and his story have evolved into a representation of loyalty in the Chinese culture. 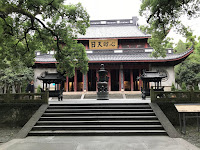 Entrance to the tomb and inner courtyard
Occupying four acres (1.6 hectares), the tomb is in the center of the complex, with other buildings including the tomb of General Yu's son and exhibitions of Yu's life and military prowess.  Eastern and western annexes of the compound hold shrines to subordinate generals who served under General Yu. 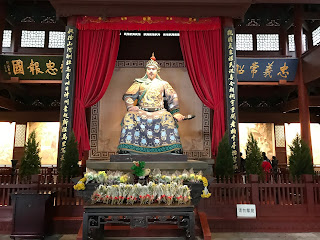 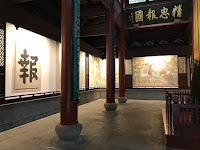 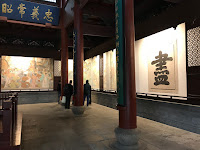 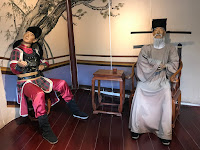 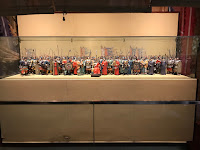 General Yu early in life and later leading his army 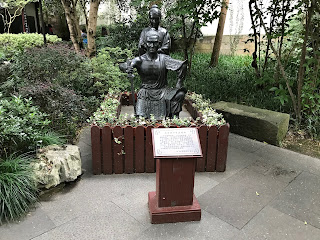 General Yu in battle
Other displays tell more of General Yu's story and show weapons and tactics of the period. 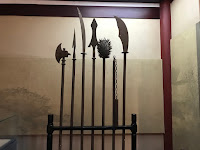 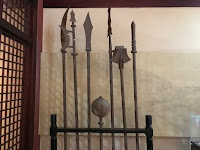 Weapons of the period
In 1513, one of General Yu's commanders placed copper statues of the people who killed Yu Fei kneeling in the courtyard outside his tomb, including the chief plotter, Qin Kuai.  These statues have been replaced several times as they have been continuously cursed, spat on, vandalized, and otherwise treated quite poorly by the visitors to the tomb.  The current versions are protected as historical relics. 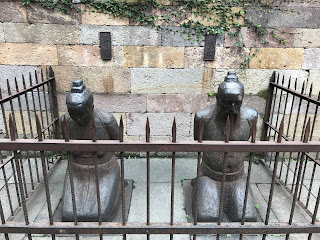 Assassins
Next to Yu Fei's tomb is that of his son, who served as his assistant on the battlefield 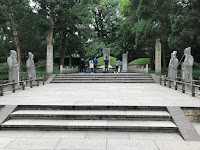 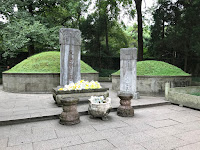 Tombs of Yu Fei and his son
At the entrance to the tomb is a display of the Loyalty Cypress.  This cypress stood next to the prison where Yu Fei was killed and, legend has it, that on the very day that Yu Fei was died, the tree withered and turned in to petrified blocks. 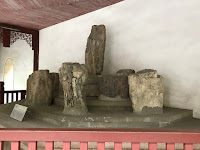 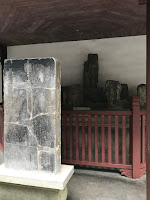 Blocks of the Loyalty Cypress
On exiting the tomb, I pass many school groups heading in to learn this important story in Chinese history. 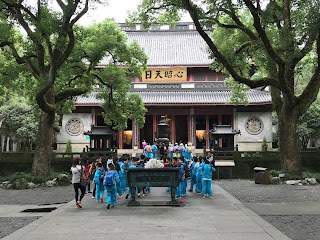 School groups coming in
Posted by Sojourner at 5:30 AM