Gyeongbok Palace was originally built in 1395 and is Korea's most famous royal palace, a massive complex of ornate structures.  The palace was destroyed in the Japanese invasion of the 1590s, after which Korea's rulers decamped to the Changdeok Palace about 3 km (1 mile) away.  The palace was restored at the end of the 19th century, building up to around 500 structures, only to be destroyed again in the next Japanese invasion in the early 20th century.  The palace was re-restored in the 1990s and is once again able to show off its magnificent architecture, fabulous grounds, and historical significance.

I enter the palace grounds from the back, near the National Folk Museum and wander through the living quarters for the queen, the queen dowager (mother of the king), and the palace concubines. 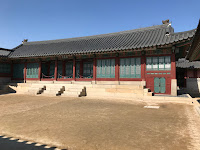 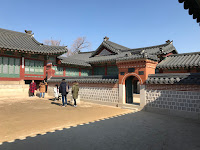 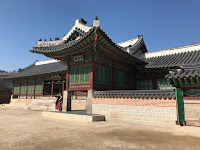 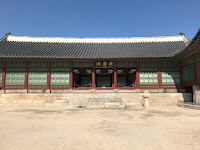 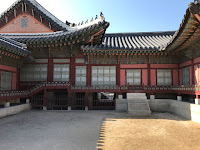 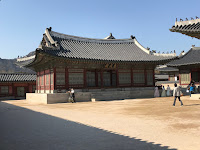 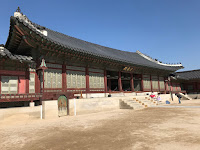 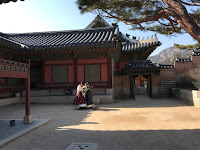 Strolling toward the front of the palace, I next cross the king's astronomical observatory.  Located near the king's sleeping quarters, the observatory allowed the king to track the movement of the heavenly bodies (important to an agricultural society) and, in the 15th century, King Sejong invented scientific devices to support the observations, including a rain gauge, sundial, water clock, and celestial globe and installed them at the observatory. 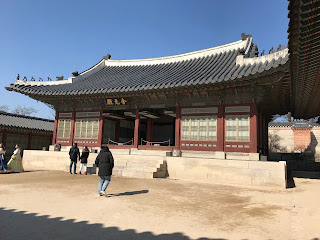 Near the observatory, the living quarters of the king also contained halls for work, study, and discussion of state affairs with staff and subjects. 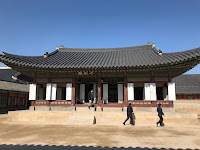 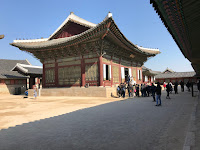 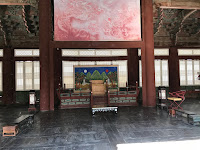 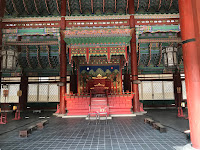 Living quarters of the king

Approaching the impressive main gate, I look back at the incredible architecture of the entrance courtyard and formal buildings surrounding it. 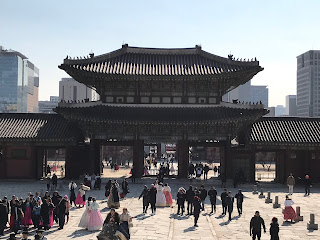 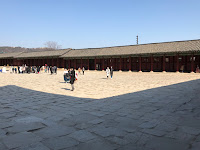 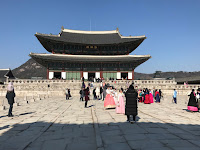 As I reach the main gate, I hear music and realize that I am arriving just in time to see the changing of the guard.  The gate guards were established in the 15th century to guard the gates of the palace and manage the gate passes, signs, and keys. 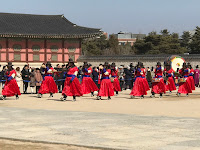 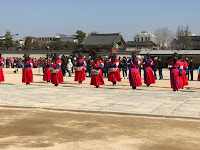 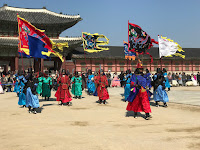 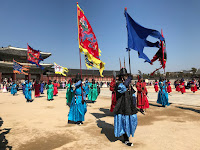 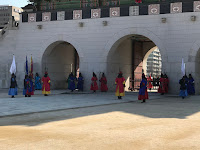 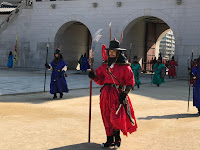 Changing of the guard

After the change of the guard, guards are available for pictures at the gate with a stern reminder to not touch the guards! 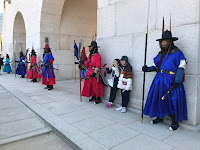 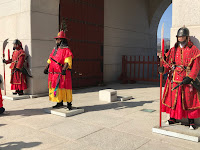 Standing guard outside the main gate

Departing the palace, I look back at this fabulous complex, with the mountains in the distance and modern Seoul just outside. 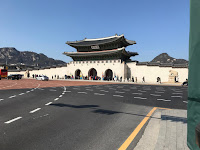 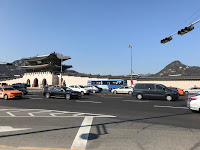 Looking back at the main gate