We eat simply, but wonderfully  in Bolzano, with lots of fabulous tastes and with much speck in various forms.  One great lunch is at Fischbanke in the rain.  We initially have to hold our umbrellas while eating (quite a feat), but, eventually, the storm passes and we can eat with both hands. 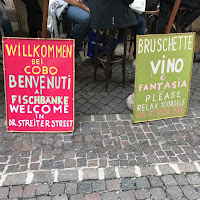 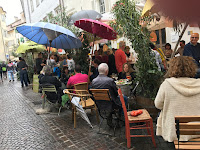 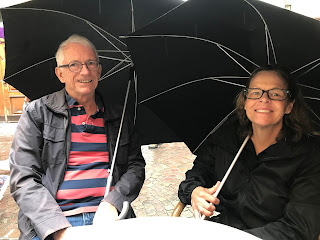 Our table at the edge of the umbrellas

We share three bruschetta:  tomato, speck, and Fischbanke special (3 cheeses, salami, pesto).  We notice that other tables share one bruschetta, perhaps we're overdoing it, but we leave no leftovers! 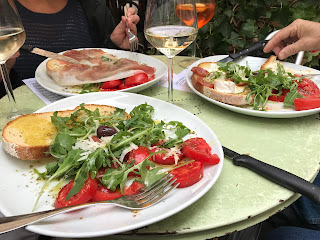 They are so good, I must show individual plates. 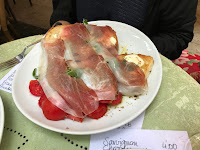 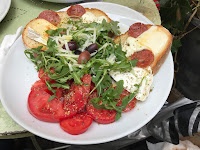 The pizza in town is incredible and we have pizza for dinner several times.  Sometimes we share several pizzas and sometimes we have more, starting with speck risotto and a caprese salad, followed by a pizza or two. 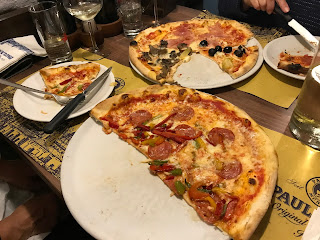 Our first night, we share bruschetta, speck, and fried eggplant, starting the Bolzano theme of speck with every meal.  At lunch in Collalbo, we focus on the speck, sharing a speck platter.  Everyone has their own version and they are all great!  We can't get enough speck and will look for it when we get home. 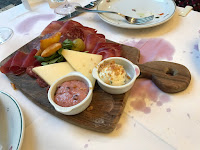 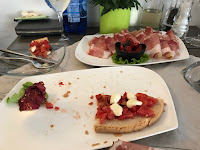 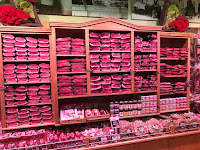 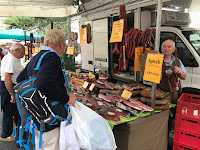 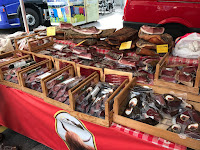 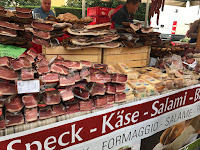 Speck in the store and market

One of the best, and simplest, meals of the stay in Bolzano is the speck dumplings at Gasthof Unterhorn on our way down Rittner Horn.  It's cold, windy, and snowy outside, but inside it's warm and inviting, just like the food. 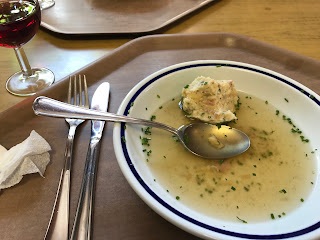 The speck dumplings are truly representative of this region:  local, warm, relaxing, filling, and friendly.

We'll be back again some time, hopefully soon!
Posted by Sojourner at 7:30 AM