Steps up the Hills in San Francisco

After work, we take the BART train into San Francisco for dinner and I start with a short walk through the city.  We get off the train at the Embarcadero Station, the first stop in the city after traveling under the Bay.  A few blocks away from the station, the streets start to go uphill and I follow.  Then, as it gets really steep, the street ends at steps uphill and they call to me to climb 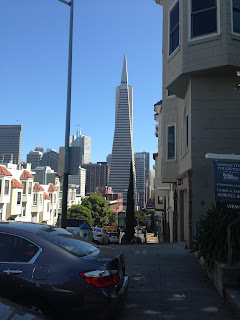 Street up the hill, Transamerica Building in the distance 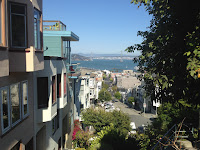 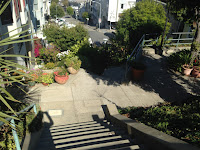 Too steep for street, time to climb the steps 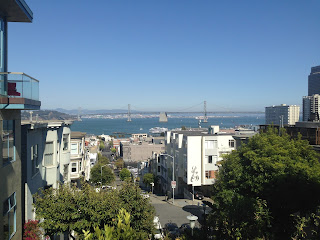 At the top, local residents are coming up the steps with their groceries and tourists are climbing with cameras in hand.  From here, its more flat and the streets resume and continue up, and up I go. 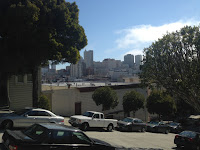 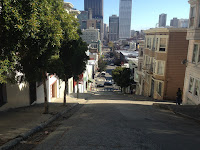 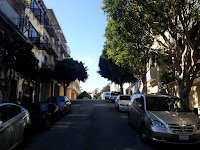 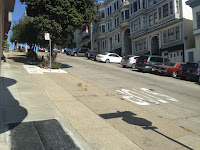 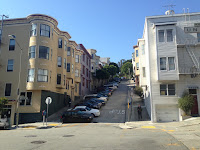 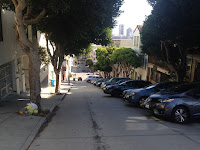 One by one, streets heading up

After about 20 minutes of taking whatever appears to be the steepest route up, the street ends at more steps up, which I climb, emerging at Coit Tower, 210 feet (64 meters) up with panoramic views of San Francisco and, also, hordes of tourists.  Coit Tower was built in 1933 on Telegraph Hill (with an observation tower at the top) in the shape of a firehose nozzle as a monument to volunteer firefighters.  Telegraph Hill itself was first known for a semaphore telegraph built in 1850 to signal the arrival of ships into the Bay. 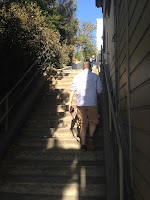 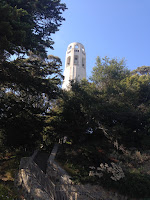 Another street ends, more steps up to reach Coit Tower 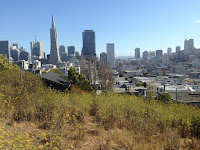 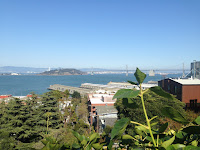 But, since I on a mission to walk, from Coit Tower I head down the other side of the hill, all steps, to the Embarcadero and the Bay. 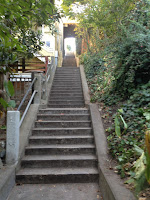 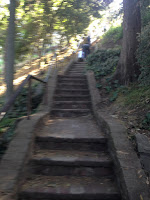 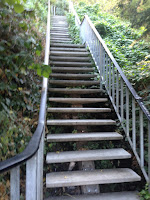 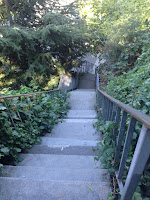 Many sets of steps down

Along the way, there are more great (descending) views of the Bay.  In the distance, the Bay Bridge crosses Yuerba Buena Island, with a road down to Treasure Island in the middle of the Bay.

Halfway down, one house (lucky to live here with the view) features a fabulous garden that I discover as I walk by. 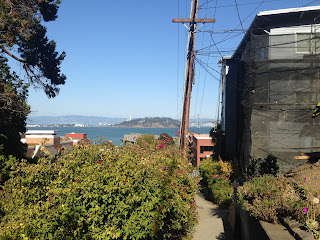 Descending view of the islands and the Bay 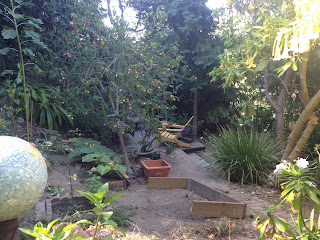 Private garden on the way down

And, finally, at the bottom, a few blocks from the Bay, the base of the stairs gives a warning for those on the way up.  It would probably be more effective warning if it also asked if the climber to be had any idea how many steps were needed to go up 210 feet! 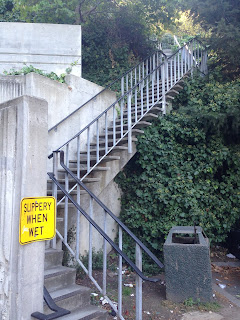 Hundreds of steps later, after up, then down, the warning

I'm a few blocks from the Bay and head in that direction.  To be continued.

Posted by Sojourner at 8:20 AM