We arrive in Paris late in the morning, take the Air France Bus from Charles de Gaulle Airport to the Arc de Triomphe and walk to our hotel, about two blocks away.  After checking in, it's time for a reacquaintance walk around Paris.  The temperature in late April is in the 40s and 50s (2-13ºC), with occasional passing showers.

The Arc de Triomphe was built between 1806 and 1835 to honor those who fought for France, particularly during the Napoleonic Wars, and contains the Tomb of the Unknown Soldier from World War I and inscriptions of all French generals and wars fought.  We walk from our hotel back to the Arc, where a huge French flag is flying inside.  The flag flies on le quatorze juillet (14 July, la Fête Nationale, Bastille Day to English speakers) and other holidays. 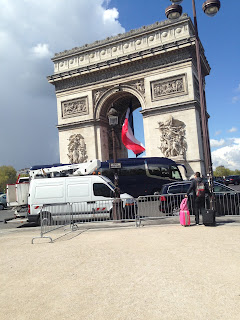 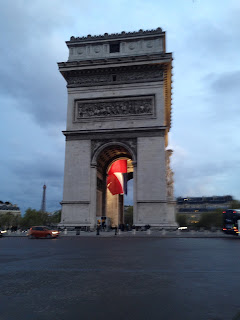 Flag under the Arc de Triomphe

We walk away from the Arc, down the Avenue des Champs-Élysées, the 1.2 mile (1.9 km), the world-famous grand boulevard of restaurants, cafés, luxury shops, theaters and many, many tourists.  We immediately spot the Drive Tennis theme at Peugot Avenue Paris, the Peugot showroom on the Champs-Élysées, in anticipation of the upcoming French Open at Roland-Garros Stadium, May 22-June 5. 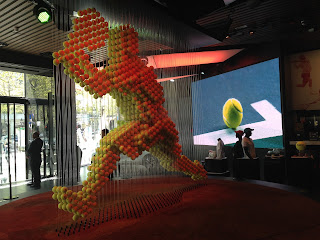 As we continue on down the Avenue, we pass the Grand Palais, where we will visit an exhibition in a few days, and head to the Place de la Concorde.  The Grand Palais, together with its neighbor the Petit Palais, was built to house great artistic events and always has multiple interesting displays and exhibits.  Meanwhile, in Place de la Concorde, the Grande Roue de Paris, a giant portable 60 meter (200 foot) Ferris wheel, installed in Paris in 2000 for the millenium celebration, is back from its later travels to England, the Netherlands, Bangkok, Belgium, and Italy, offering spectacular views across Paris. 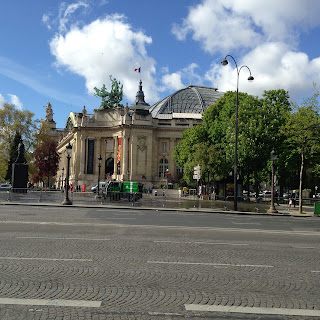 Passing the Grand Palais across the Champs Elysses 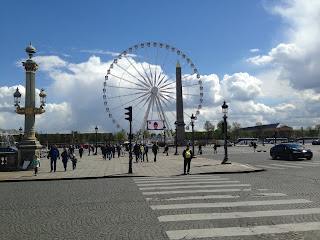 Place de la Concorde is the largest square in Paris, occupying 21 acres (.03 sq. miles, .08 sq. km) between the Champs Elysses and the Tuileries Gardens.  Facing onto Place de la Concorde are the Hôtel de Crillon (next to the US Embassy, just off the square), the French Naval Ministry, the museums Jeu de Paume and l'Orangerie (both in the Tuileries Gardens), and, across the Seine, the French National Assembly.  Jeu de Paume used to house much of the impressionist collection now at Musee D'Orsay and currently shows modern and post-modern photography. L'Orangerie, across the Tuileries is a gallery of impressionist and post-impressionist paintings and, in particular, features eight panels of Monet's Water Lilies filling two oval rooms on the ground floor.  During the French Revolution, the guillotine was located in Place de la Concorde.

The Tuilleries Gardens, created in 1564 and opened as a public park after the French Revolution, stretch along the Seine from Place de la Concorde to the Louvre, with gardens, sculpture, puppet theaters, small boat basins, restaurants, and great areas to sit and rest. 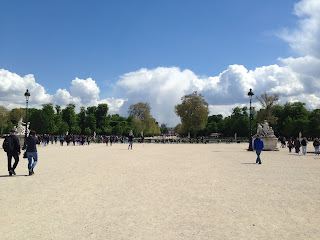 Looking through the Tuileries Gardens to the Louvre 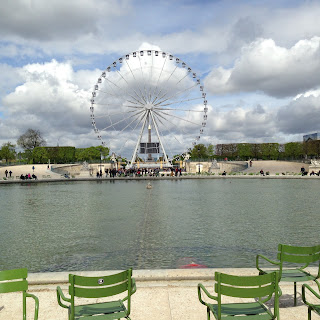 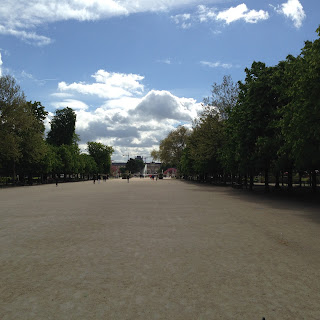 Walking through the Gardens, getting closer to the Louvre

In the Tuileries Gardens, we see that the spring flowers are just coming out, making for some beautiful displays. 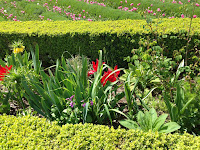 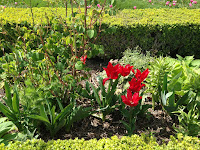 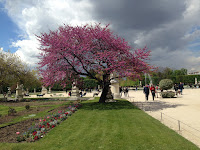 And, as we pass through the Tuileries Gardens, we approach the Louvre, one of the world's largest museums and a central landmark of Paris.  The Louvre is the world's most visited museum and is housed in a palace originally built in the 12th century, with a mind-numbing 35,000 objects on display, including Venus de Milo and Leonardo da Vinci's Mona Lisa.  The central courtyard of the Louvre features a glass pyramid designed by I. M. Pei and completed in 1989 (a favorite place for tourist pictures). 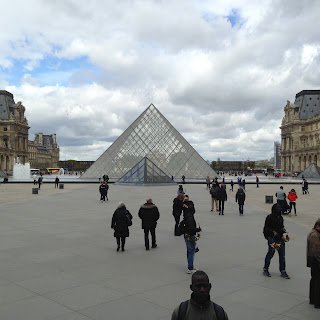 Pyramid in the Louvre Courtyard

There is always something new going on in the Louvre (and most other Paris museums).  This trip, we find a glass building titled Panorama erected in an outdoor courtyard of the Louvre, Cour Carrée, reflecting the inner facade of the Louvre and containing a cardboard architectural display.  After the Louvre, Panorama will go on a tour of several cities around the world.  Entry to the Panorama is free and the line is short, so we take a quick spin through the exhibit. 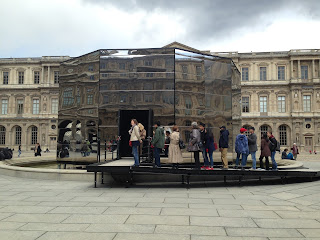 Looking away from Panorama, we see, framed in the archway exit of the Louvre, across the Seine on the Left Bank, the Institut de France, the French Institute, which consist of five academies (including the Académie Francaise, the final authority on the French language) and manages around 1,000 institutions, museums, and chateaus across France. 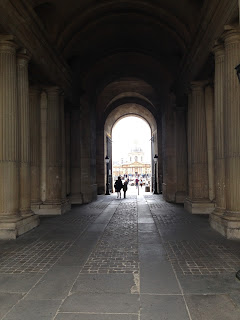 Linking the Louvre and the Institute de France is the Pont des Arts bridge, famous for all the love locks fasted on it by tourists and locals alike.  But, after part of the bridge railing collapsed from the weight of the locks, the iron grillwork (great for lock attachment) has been replaced by plastic panels and the few locks that find places to attach are quickly removed).  BTW, notice the accordion player, preserving French culture (and tips), next to the staff removing the locks. 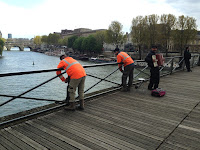 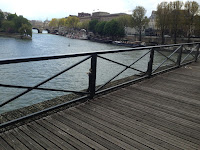 The few locks are quickly removed

But, a few hundred feet down the Seine, love locks have found a new home. 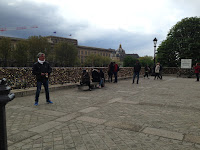 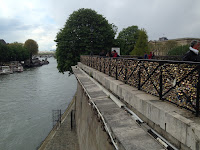 Love locks find a new home a short ways away

We'll continue our stroll through Paris next entry.