After we cross over the Pont des Arts bridge from the Louvre to the left bank of the Seine, we continue along the river toward Place Saint-Michel, the popular public square.  There is construction at the Institut de France and the we note how the construction offices fit cleverly around the statue in front. 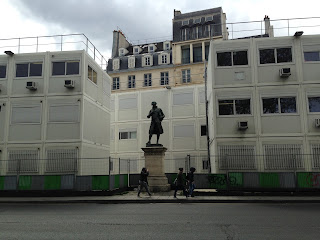 Construction working around the statue

We walk up the Seine to the next bridge, the Pont Neuf Bridge, and cross over to Île de la Cité, one of the two islands in the Seine and the location of original medieval Paris.  Île de la Cité now contains the Paris police headquarters, Prefecture de Police, the Palais de Justice law courts, Notre Dame cathedral, and the Conciergerie prison where Marie Antoinette was held in 1793.  Île de la Cité, was first populated around 52 BC and the Pont Neuf bridge is the new bridge, opening in 1607.  From the bridge, we look back and see the Pont des Arts bridge down the Seine from us, with the Louvre on the right. 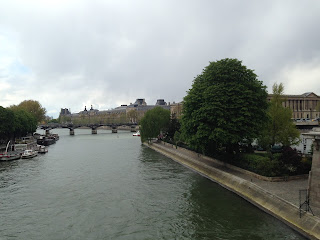 We walk a block over, along the side of the Palais de Justice, to Boulevard de Palais and cross the Seine again on Pont Saint-Michel into Place Saint-Michel. 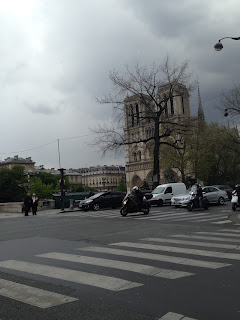 There is always something to watch in Place Saint-Michel, between the students, tourists, and occasional protest group.  The square is surrounded by cafes and restaurants and is a great place to sit, have a glass of wine, and watch the world go by.  But, we are on our reacquaintance walk and continue through the square and into the winding streets of the left bank. 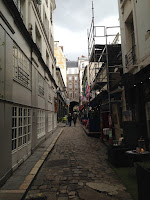 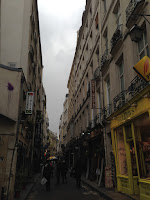 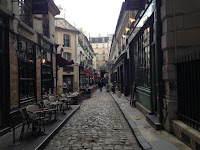 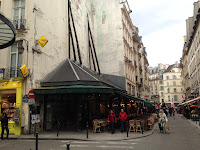 The left bank (Rive Gauche) is the southern bank of the Seine (correspondingly, the northern bank is the right bank, Rive Droite).  The left bank was the early Paris of artists, writers, philosophers, and the studios and cafes they inhabited.  Now, it is a warren of narrow streets, shops, hotels, cafes, restaurants, and the Sorbonne/University of Paris (Université de Paris), one of the first universities in the world, founded in the 13th century.  This area is also know as the Latin Quarter as the Latin language, the language of scholars in the Middle Ages, was once widely spoken around the university.

We wander several blocks to Le Conti, the cafe where we always stop for a glass of wine on our way to dinner in the area, but, sadly, time has moved on and it is no more. 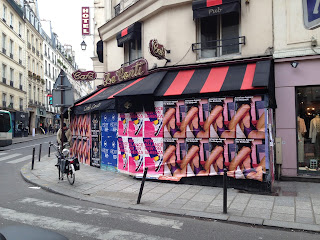 We continue through the neighborhood to the Grande Boulevard Saint Germain and follow it toward the National Assembly, window shopping along the way.  But, we quickly tire of the modern boulevard and head back into the the winding streets of the Latin Quarter, jigger-jaggering our way to the Seine.


Crossing the Seine, returning to the right bank, we pass in front of the Louvre and head up Avenue de l'Opéra toward the Opéra National de Paris, the French Opera, founded in 1669 and now presenting around 380 performance of opera, ballet, and other concerts each year.  But first, after the Louvre, we pass one of Laura's favorite Paris Metro (subway) station entrances, next to La Comédie-Française which was founded as a state theater with its own acting troupe in 1680. 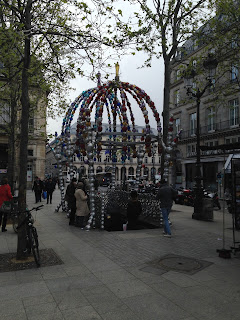 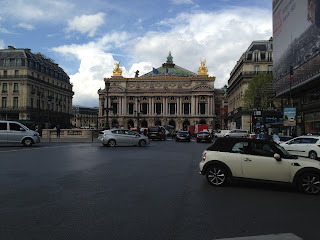 Behind the Opéra is Boulevard Haussmann and the grand department stores, Galleries Lafayette and Printemps. We'll return to the stores in a day or two, but now continue up Boulevard Haussmann toward our hotel, passing the Gare St. Lazare train station and more shops and sights. 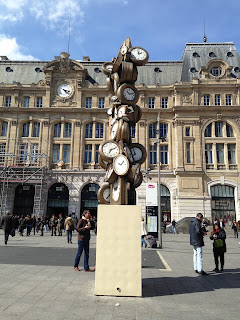 In front of Gare St. Lazare

We take a quick spin around the neighborhood surrounding out hotel and see that the markets are closing for the day.  This is a great area, we're just a few blocks from the Champs Elysses, but we are the only tourists around and we are surrounded by good-looking food in the markets and plenty of small cafes and restaurants to choose from. 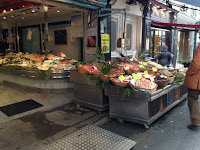 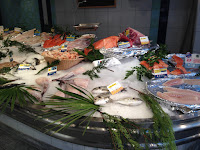 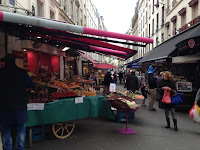 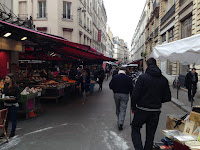 Markets near our hotel

And, as the sun set, we start to think of dinner 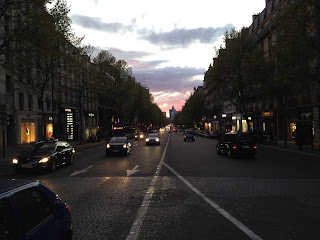 Posted by Sojourner at 9:46 AM