After hiking through San Francisco from Market Street up to Grace Cathedral, over to Pacific Heights, and down to the Palace of Fine Arts, we arrive at the Bay, on the eastern edge of Crissy Field.  Crissy Field was the U.S. Army Airfield at the Presidio until 1974.  In 2001, the area was opened to the public as a 130-acre salt marsh and estuary in the Golden Gate National Park, a joint effort of the National Park Service and the Golden Gate National Park Conservancy.  New and rebuilt sidewalks, boardwalks, and trails wander through the park and are packed on weekends.

The paths meander through Crissy Field along the Bay to the base of the Golden Gate Bridge, with great views of the Bridge and the Bay. 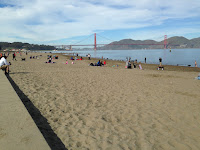 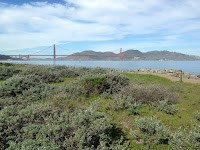 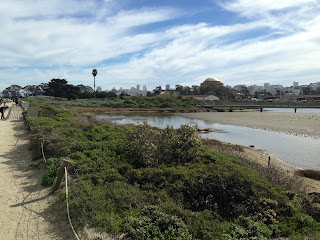 View back toward downtown (from where we walked)

From Crissy Field, we walk through the Marina over to Fort Mason, stopping first at the Safeway for a Diet Coke and Diet Dr. Pepper. Although the houses in the Marina come right up to the street, focusing on the views of the Bay, some people are able to do a lot with their small yard space. 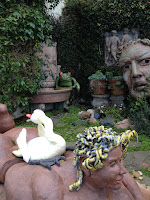 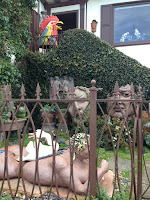 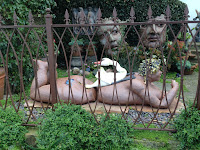 Front yard art in the Marina

Fort Mason served as a US Army Post for over 100 years and, during World War II, was the principal military port for the war in the Pacific.  Now, Fort Mason is part of the Golden Gate National Recreation Area, with a trail along the Bay connecting the Marina to Fisherman's Wharf. 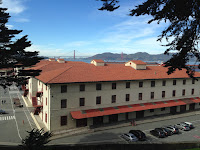 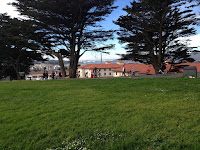 The Army still uses some housing at Fort Mason and the rest is occupied by, among other things, a youth hostel and the Fort Mason Center for Arts & Culture with art galleries, stores, cafes, restaurants, dance studios, museums, and art classes. 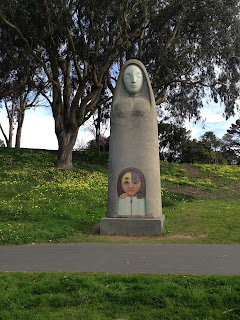 Statue on the path in Fort Mason 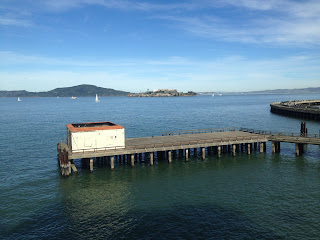 View of Alcatraz from Fort Mason

As we leave Fort Mason, we pass through the San Francisco Maritime National Historical Park, where people are swimming in the Bay, despite the February water temperature of 56ºF (13ºC).  The Park contains a museum, a historic fleet of paddlewheel, steam, and sailing ships, and a Maritime Research center that focuses on sail and steam ships of the West Coast.

We walk through the Park and toward Fisherman's Wharf, passing old San Francisco fishing companies (closed on Sunday) and fishing boats at their docks. 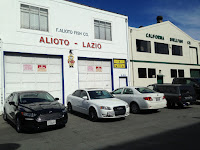 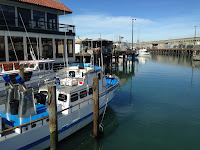 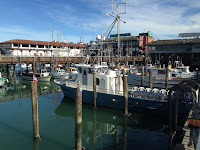 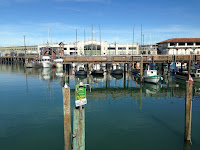 The fishing business at Fisherman's Wharf

We are heading toward the fish stands outside the old Fisherman's Wharf restaurants for our reward, two crab sandwiches.  Fisherman's Wharf is famous for Dungeness crab, caught and available here since the 1840s.  In the early days, many fisherman were paid with fish and crab they caught and could sell on the streets themselves, leading to the seafood stands that still remain and at which we buy our sandwiches. 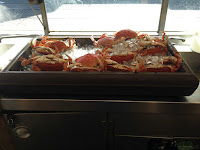 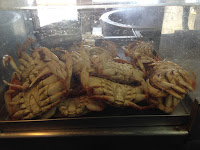 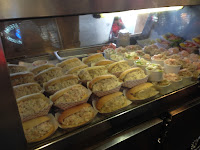 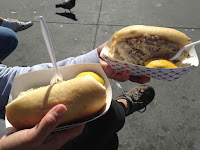 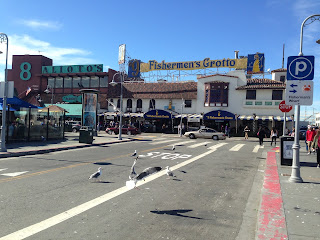 Leaving Fisherman's Wharf, we walk along the Embarcadero, admiring the flowers blooming in the warm February weather. 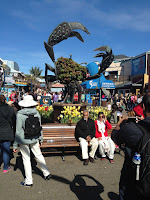 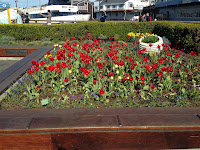 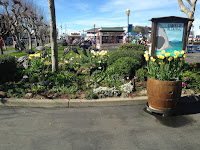 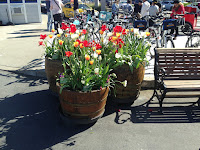 Flowers along the Embarcadero

Our destination is the Ferry Building, where we'll visit the Marketplace to pick up some duck and mushrooms for dinner.  The Ferry Building was completed in 1898 and, while ferries still leave from the area for destinations all over the Bay, the building houses a packed food hall and a farmer's market on Saturday's. 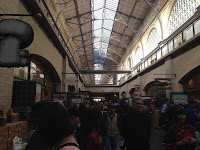 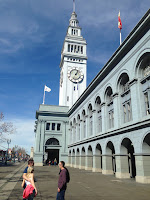 Ferry Building inside and out 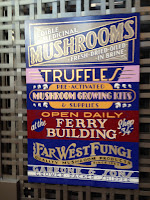 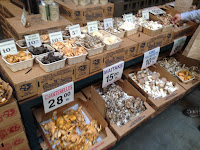 Mushroom stand in the Ferry Building

Duck and mushrooms in hand, we walk back to our car, admiring the Bay and the views of the Bay Bridge. 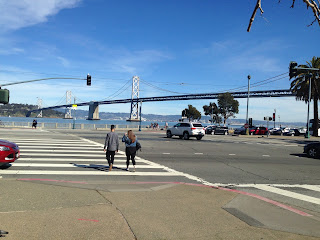 View of Bay Bridge from the Embarcadero

And, even more dramatically, the views of the city behind us as we drive across the bridge, heading back to the East Bay and Alameda. 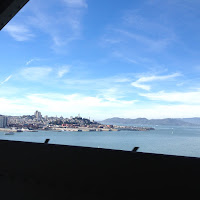 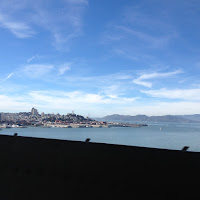 View of San Francisco from the Bay Bridge, leaving the city

What a great time, another wonderful day of exploration in the city.  This is one of the reasons we live here (mid-70s-to-mid-80s temperatures in February also doesn't hurt)!

Posted by Sojourner at 8:25 AM