It's Valentine's Day and a beautiful day to walk for a few hours around San Francisco.  The weather is sunny, with a light breeze off the San Francisco Bay and a temperature of 78ºF (25ºC).  It's Sunday and we drive over early to snag a free parking place at a meter near the Ferry Building.

We first stroll up to Market Street and walk west, away from the Bay.  We immediately spot remnants of past and current celebrations. 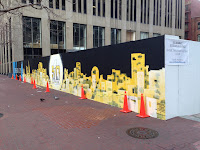 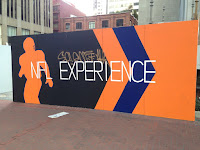 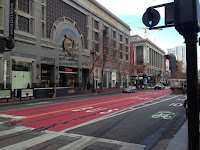 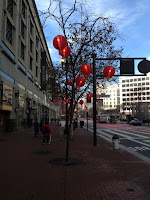 The Chinese New Year decorations are outside the Westfield San Francisco Center, home to Bloomingdale's, Nordstrum, Bristol Farm, a 9-screen multiplex theater, and a satellite campus for San Francisco State University.  Across the street is the Powell-Market turntable for two of the three cable car lines in San Francisco, a big tourist draw.  There's a long line to ride the cable cars and the people at the end probably won't get on for a hour or two. 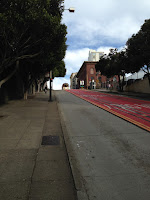 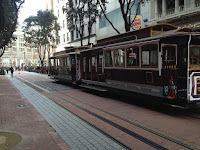 Cable car at the peak and waiting at Powell-Market

We pass the cable cars, cross through Union Square and start heading up the hill to Grace Cathedral.  We take great delight that the cherry trees at the cathedral are in bloom, as are many others in the city, and continue west toward the Pacific. 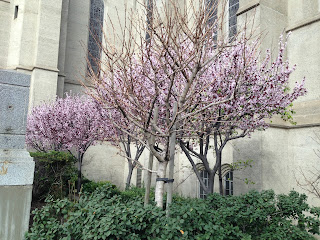 After a few blocks, we turn north toward Fisherman's Wharf, with views of downtown and the Bay near the Bay Bridge through the gaps in the streets we pass. 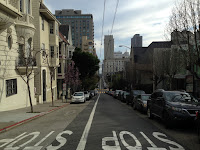 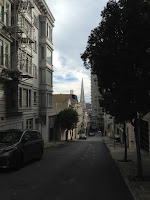 Views of San Francisco Bay in the distance

Hidden between two buildings is a new playground.  We say "hi" to the Parks and Recreation volunteer who is cleaning up and tell him that it looks great.  He is really proud of the park and it shows.  What a wonderful spot in the city! 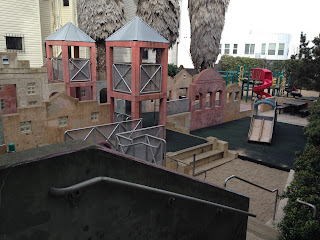 After the playground, we pass a decorative topiary on the corner and a few more trees that have been tricked into blossoming by the warm weather. 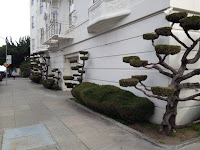 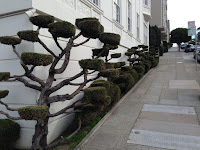 Topiary on the corner 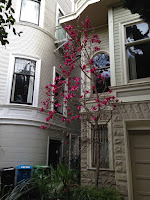 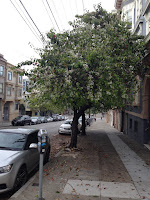 We plan to wander generally toward the Golden Gate Bridge and turn west for a few more blocks, walking through Pacific Heights along the top of the hill with more great views of the bay, Angel Island, and Alcatraz, then down the hill , turning west again on Broadway. 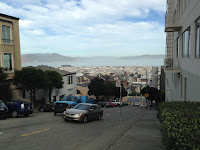 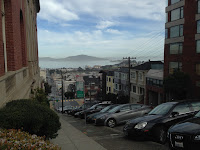 Views of the Bay 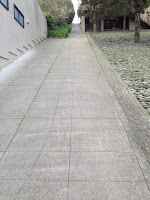 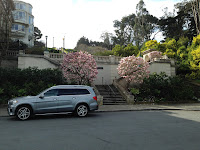 Walking along Broadway, we see the old and new houses, an interesting juxtaposition of new renovations or construction alongside the older mansions.  Also, a lot of great gardens and plantings. 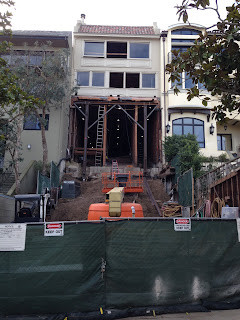 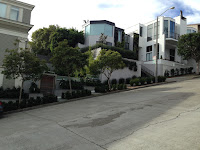 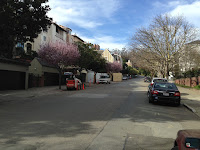 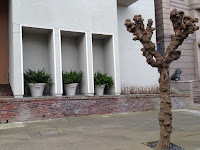 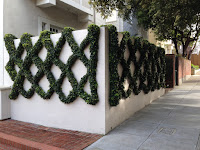 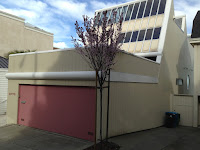 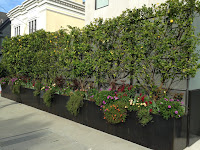 We reach the west end of Broadway and take the steps down the hill, walking alongside the Presidio, an army post for 218 years, now in the care of the National Park Service, through the Palace of Fine Arts, one of the few surviving structures from the 1914 Panama-Pacific Exposition, and on to the edge of the Bay. 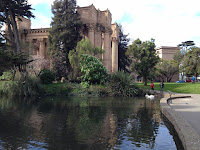 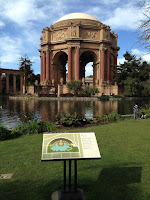 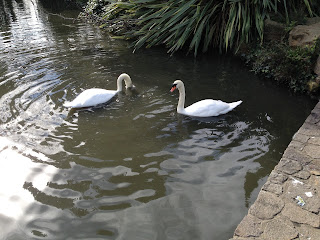 Swans at the Palace of Fine Arts

As we cross over Marina Boulevard from the Palace of Fine Arts to the Bay, we run across one of those odd signs that I see worldwide.  I'm sure there's an explanation, but we'll have to think seriously about it. 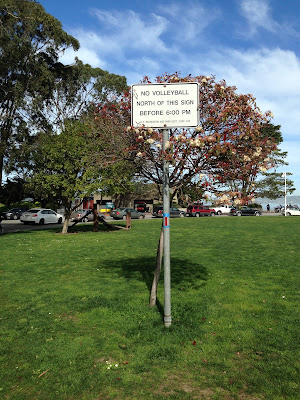 Sign in a field on the edge of the Bay

We'll continue along the Bay toward the Golden Gate Bridge in our next posting.