We walk through the Arts District on our way back from Old Town/Downtown Las Vegas to our hotel on the Strip.  Heading down Main Street from the end of Fremont Street, we have about eighteen blocks to walk  to reach Las Vegas Boulevard.

Leaving Fremont street, we pass the Greyhound bus terminal, World Market Center across the way, and City Hall (with 33 solar trees in front and solar panels on the roof - the perfect climate for them).  The World Market Center is the largest home and hospitality showroom complex in the world, with 5 million square feet of floor space.  Inside the Market is the Las Vegas Design Center, with more than 400,000 square feet of permanent showrooms open to the public.  Not much to say about the Greyhound terminal. 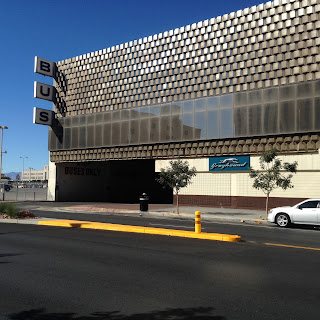 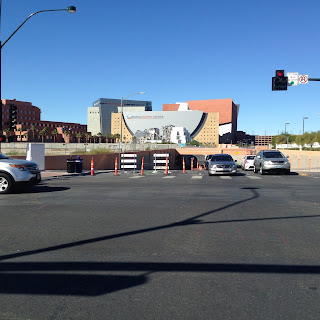 World Market Center across the way 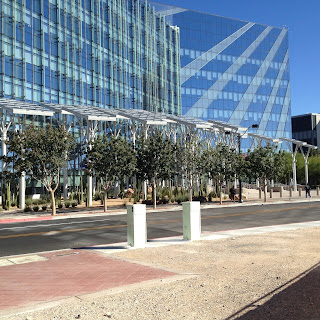 City Hall with solar trees along the side

Just off Main Street, we walk past the Bonneville Transit Center, at Casino Center Boulevard and Bonneville Avenue.  The Center is designed to complement the redevelopment and revitalization of downtown Las Vegas and has 16 vehicle bays, 100 double-stacked bike racks, a self-service bike repair station, and more bus stops on the street alongside the Center.  We can get just about anywhere in Las Vegas from here.  But, we keep walking. 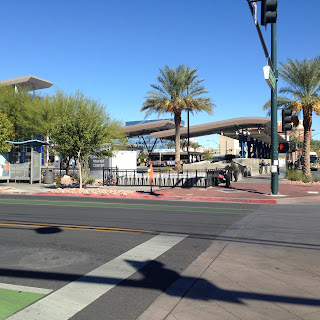 Finally, a block or two later, we're getting to the Arts District, announced, of course, by a neon sign. 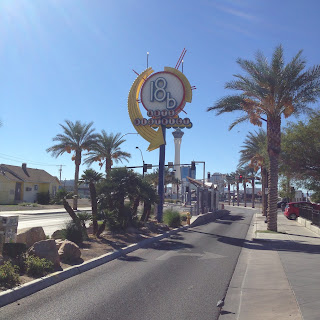 The Las Vegas Arts District is also called the "18b" and was originally set aside as an18-block neighborhood and has expanded from that.  Located roughly half-way between Fremont Street and the Stratosphere, the District is home to artists, public art displays, galleries, antique shops, boutiques, and restaurants.  The first Friday of every month, up to 30,000 people visit the District for First Friday, a free "celebration of creativity and authentic Las Vegas Culture."

As we wander further into the Arts District, we see painted buildings, a great way to decorate the neighborhood. 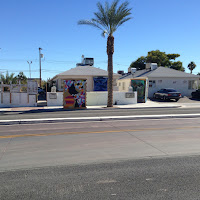 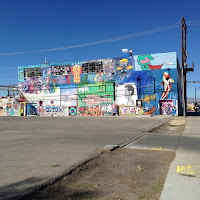 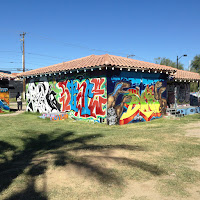 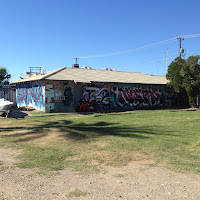 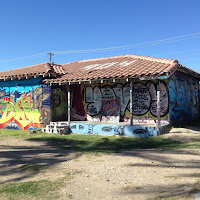 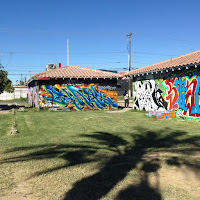 Painted buildings in the Arts District

Then, a decorated bus stop 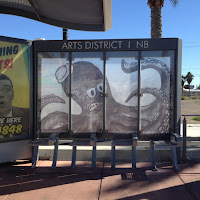 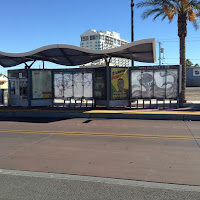 And, an empty lot with art displayed on stands.  The Stratosphere is in the background and we are getting close to the end of the District 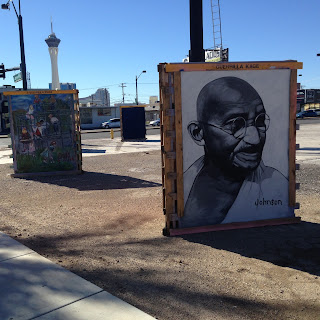 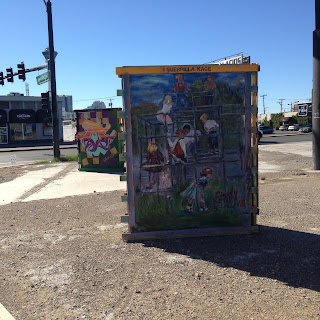 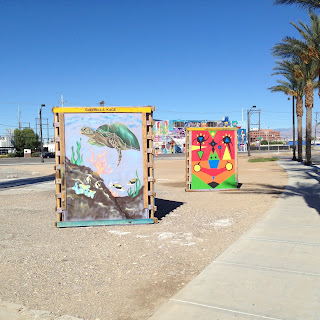 Paintings standing on a vacant lot

Another few blocks and we are back on Las Vegas Boulevard, heading towards the Strip and the ongoing party, as evidenced by Dino's Bar, with awards for the Best Dive Bar and Best Karaoke in Las Vegas. 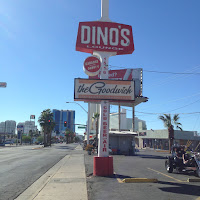 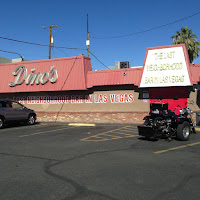 Leaving civilization, we continue on to the Strip and our hotel.

Posted by Sojourner at 8:43 AM