As we approach Fremont Street, walking down Las Vegas Boulevard from the Strip, we start to see the neon signs. 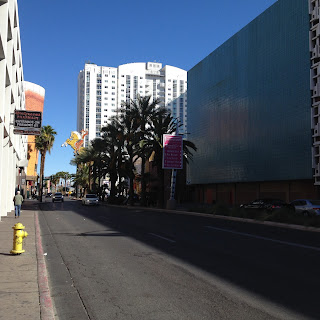 The neon signs have been restored and are located throughout the area and in the Neon Museum.

As we reach the Fremont Street, we are welcomed in both directions 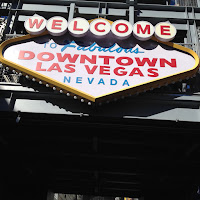 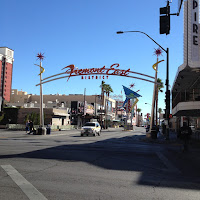 Looking down Fremont Street, toward the Fremont Street Experience, we see the LED canopy, 1500 feet long and 90 feet high, which serves as the world's largest electric sign.  The 12 million LED lights and 220 speakers are used to produce a light and sound show nightly at dusk.  Zip lines run underneath the canopy and over three permanent concert stages.  We arrive late morning and don't get the light show, but we've seen it on previous trips and it is spectacular and well worth a trip over from the Strip. 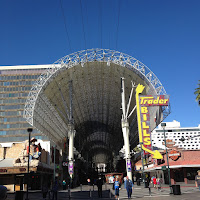 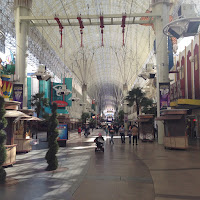 We wander down the pedestrian mall under the canopy, heading to the Golden Nugget, one of the oldest casinos in Las Vegas, build in 1946.  A massive, three-phase renovation from 2005 to 2009 has revived the Golden Nugget as a prime destination.  As we walk through the casino, we pass the Hand of Faith, the world's largest gold nugget. 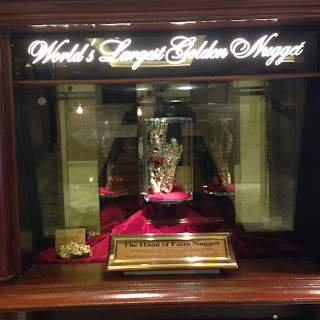 Continuing deeper into the casino, we come to the pool, next to an aquarium with a waterslide through the tank of sharks. 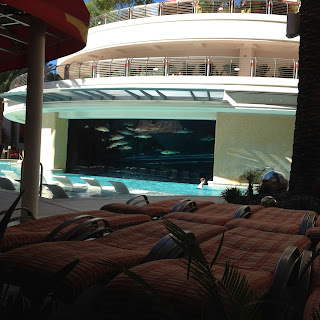 Tank of sharks, waterslide through the middle

Since we're not staying at the Golden Nugget, we don't get to play with the sharks.  We drop a few coins in slot machines on our way out, grab Diet Cokes at the ABC Store next door and head up Main Street toward the Arts District, in the general directions of the Strip.