Tuesday was Le Quatorze Juillet, the French national holiday on the 14th of July, known as Bastille Day in English-speaking areas outside France.  In honor of the occasion, we have a wonderful bottle of Pierre Cellier Brut Reserve Champagne from K&L Wines and a white Graves from Château du Haut Maray in Bordeaux, recommended and shipped to us by our friends at Bordeaux Classique in St. Emilion. 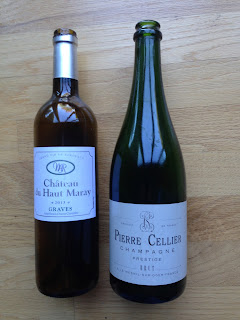 We’re pondering what to serve with these fine wines, but then find that our fishmonger, JP Seafood, has obtained a 30 pound Wild King Salmon that he is recommending highly and there are two fillets left.  We have to have them!

To pair with the champagne while we cook, continuing the celebratory French-themed fashion, we complement the taste with several assorted hard cheeses from Cowgirl Creamery at the San Francisco Ferry Building.

Sipping the Pierre Cellier Champagne, we are rewarded with a spirited blend of equal amounts Chardonnay, Pinot Noir and Meunier.  This champagne is made by the same people as make Phillipe Gonet, which we really enjoy, but with purchased fruit.  This is a new label, perfectly done, and fabulous with the cheese.

But, I digress.  Back to the Salmon.   I return to a favorite recipe from Bobby Flay’s Boy Meets Grill:  Red Chile Rubbed Salmon with Toasted CornVinaigrette. 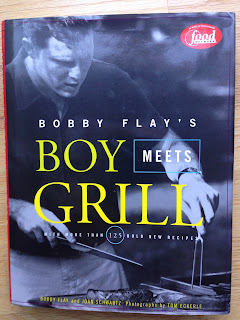 We have some Red Chile Rub left over from when we last made this dish (albeit with a farmed salmon) a few weeks ago and I don’t need to assemble the combination of ancho chile powder, cumin, brown sugar and cinnamon.  I use it up.

I boil, then grill three ears of shucked corn, two yellow and one white (Bobby suggests two, but I like the extra amount).  Along with the corn, I also grill two jalapeño peppers (Bobby suggests 1, but I want more kick).  The vinaigrette combines lime juice, the grilled jalapeños, seeded and chopped, and honey, with olive oil whisked in until emulsified.  Cutting the corn off the cobs, I add it to the vinaigrette along with sliced green onion and cilantro, season with salt and pepper, and stir it all up.

Applying the Red Chile Rub to the salmon, along with a little olive oil, salt, and pepper, we grill each side a few minutes until medium and let it rest while I open the wine.

Greg and Mansur at Bordeaux Classique have been recommending and sending us wine since we wandered into their shop seven years ago.  Walking down the street in St. Emilion in 2007, we spotted the storefront and  the tasting counter inside and had to stop.  We’ve been truly pleased with the results, visited them in the store with friends several years later, and ordered by email periodically over the years. 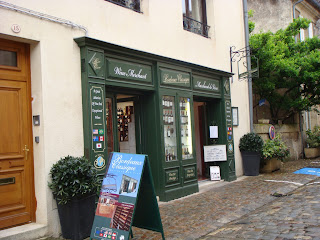 The Château du Haut Maray that Mansur recommended is a blend of 70% Sauvignon Blanc and 30% Sauvignon Gris, packed with tropical notes including honeysuckle, melons and peach and a beautifully buttery finish.   The winery only makes 3000 bottles and Mansur suggested consuming it this year or next year.  We paid 15€ for the bottle and a little freight and duty – what a great deal!

I pour the wine, plate the salmon, add the toasted corn vinaigrette, et voila, un bon dîner à la maison.  It’s not the same as standing along the Avenue des Champs-Élysées in Paris, watching the parade and seeing French fighter jets fly the length of the boulevard, then wandering into a friendly-looking neighborhood bistro for dinner, but we’re not there this year and we celebrate quietly by ourselves
Posted by Sojourner at 8:09 AM