Flying Ourselves to the Grand Canyon


One of the great things about the Grand Canyon hike is the journey back and forth.  We fly from the San Francisco Bay Area to Grand Canyon (GCN) airport in Tusayan, just outside the park in a 4-seat Cirrus SR22 airplane.  The flight takes a little over 3 hours and offers great scenery as we cross the Sierra Nevada mountains at Mammoth Lakes, fly down the valley between the military training areas to Las Vegas, then straight across to the Grand Canyon.

The Las Vegas Terminal Area is Class 2 airspace, requiring a clearance from ATC to enter and navigate in it, but only from the surface to 9,000 feet.  At 9,500, on our own navigation, we cross the city and watch all the action from above.  We monitor Las Vegas Approach and watching our traffic collision avoidance system (TCAS) to visualize the traffic and stay out of the LAS approach and departure routes depicted on the chart 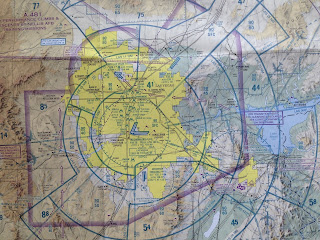 GCN is at 6609 feet elevation and our groundspeed is faster for our indicated airspeed than at sea level.  We take longer to land and float way down the runway, but with 9000 feet, we have plenty of space to land  and turn of only a taxiway ½ way down the runway.

After parking and tying down the airplane, we buy park entry tickets in the airport terminal and catch the park shuttle bus into the park.  And, to return, we just take the shuttle bus back to the airport. Parked and tied down at GCN

After a few days, we depart GCN and take the opportunity to fly over the canyon and look at the areas where we have been hiking and sightseeing from above. 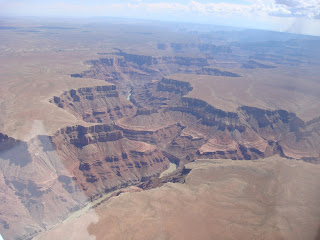 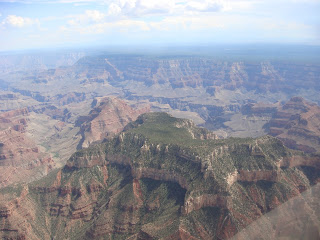 Grand Canyon from the air

The Grand Canyon area has Special Flight Rules to prevent sightseeing aircraft from disturbing the park and from running into each other.  Four corridors over the canyon have separate altitudes for different directions of flight, 10,500-12,500 southbound, 11,500-13,500 for northbound.  Two of the corridors allow authorized commercial air tour operators to fly specific paths at lower altitudes, as low as 7500 feet for helicopters and 8000 feet for fixed wing aircraft.  We cannot fly that low, but we have a great view! 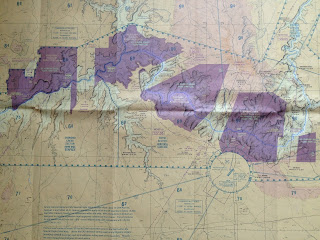 After our sightseeing trip over the Canyon we have a quick flight to Las Vegas, albeit with a little excitement as there are thunderstorms along the path. 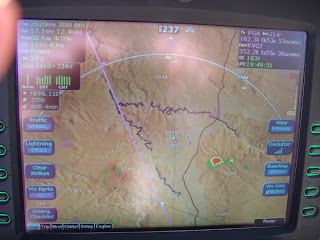 Moving map showing lightning strike nearby on the way to VGT

We stay a good distance from the storms, and fly over Lake Mead on our way the North Las Vegas Airport (VGT). 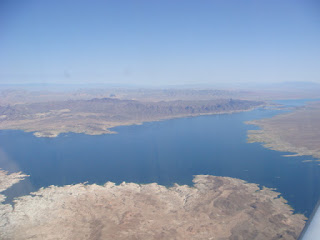 Once we arrive at VGT, we head over to the Strip for a completely different experience than we have had at the Grand Canyon the last few days.
Posted by Sojourner at 9:45 AM