After the Cinque Terre Mudslides of 2011

We visited Cinque Terre in May of 2012, a little over half a year after the devastating mudslides in October 2011.  Cinque Terre received 22 inches of rain in four hours and rivers of mud poured down the hills into Monterosso al Mare and Vernazza   In Monterosso, the mud was up to the second floor of houses in the town and we could still see a ring around the houses where the top of the mud sat. 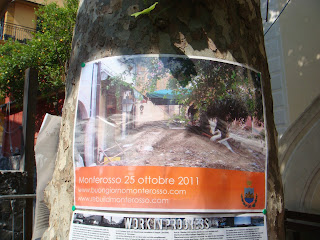 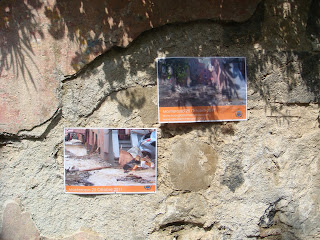 Postings around Monterosso showing the damage

The mayor of Monterosso described the village as all but wiped out.  Vernazza had to be evacuated by sea. 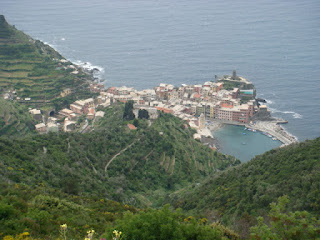 Approaching Vernazza on the trail from Monterosso

Our friends, Matteo and Carla, who own Hotel VillaSteno, were located up a slight hill and were undamaged, but their guests were unable to come or go. 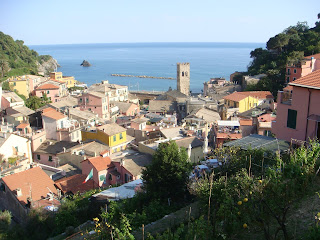 View across Monterosso from the Hotel Villa Steno

There was a massive effort to dig out and reopen by Easter.  And, they did!  While we were there, the gelatto shop on the main street reopened that day and it was free gelatto for everyone.  And, we were all in there, residents, shop owners, tourists, everyone enjoying together another story of recovery from and victory over the elements! 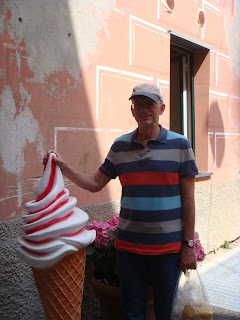 From our hotel room, we watched the owner and chef of one of the restaurants rebuild his garden.  During the day, he was clearing, digging and planting, working incredibly hard.  At night, he was in his restaurant managing the kitchen and greeting the guests.

Rebuilding all the roads took a while and hiking in the hills above the towns required some flexibility and loose definition of paths.  Because the trails along the Mediterranean were mostly closed, we were introduced to the upper trails across the tops of the hills, hiking from Monterosso to Levanto and Riomaggiore to Portovenere.  We now prefer those hikes to the more crowded lower trails (more on the hikes in a later posting).

There were still some obstacles along the way, particularly walking along the roads.  Some sections of the roads were reopened and the barriers had been removed and stored in the intersections. 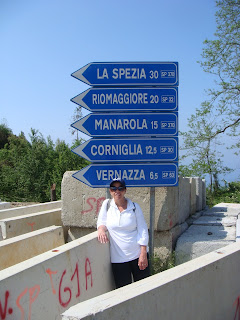 Intersection up in the hills above Monterosso

But, then, others were going to take longer, and nothing says “don’t drive here” like a nice dropoff.  We hike down, then back up the other side to stay on the road.  Then, further down the road, we must climb over the piles of dirt that were dug out of the towns and carried uphill to fill in the roads. 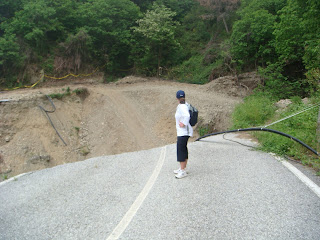 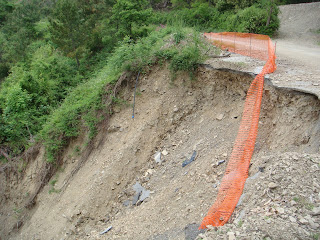 Further down the road toward Corniglia 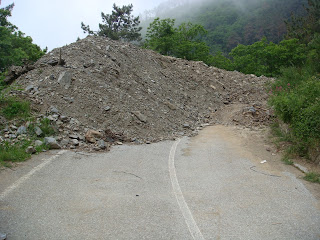 Dirt trucked from below

In the towns, work continued as the tourists arrived and filled the shops, restaurants, and trails. 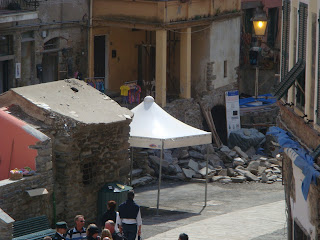 Walking into Vernazza from the train station

There was another mudslide the next year, and while some of the trails are still not yet reopened in 2015, Cinque Terre continues to delight everyone who visits.  The towns are charming, the hiking is fabulous, and the people are great, welcoming and good spirited.  We’ve been there every year since, and will be going back this Fall.
Posted by Sojourner at 9:26 AM